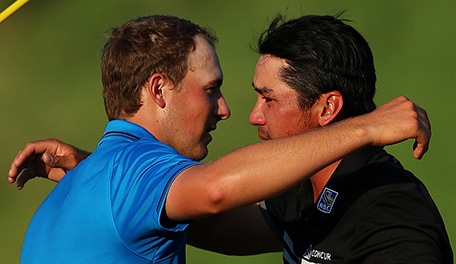 There are many different ways to explain why Jordan Spieth is so popular among his fellow players, even though he has an annoying habit of out-playing them all a lot of the time.

Go back to July at the Open Championship, when Spieth's final birdie putt swerved just left of the 18th hole at St. Andrews, leaving him one shot out of the playoff. Those three inches separated him from a chance to win a third straight major, a chance to keep alive the possibility of making unimaginable history.

Most players would have bolted the premises as quickly as possible and gone off to play the what-if game. Spieth went through his paces with the media and then walked back out to the 18th green to watch the end of the playoff. When Zach Johnson walked off the green triumphant, Spieth was there to give him a congratulatory hug.

Flash forward to last Friday at Whistling Straits. Mike Davis, the executive director of the USGA, was standing outside the media tent when he saw Spieth sprinting in his direction. Spieth had just shot a second-round 67 to move close to the leaders at the PGA Championship.

"They probably won't start without you," someone joked with Spieth, referring to the reporters waiting inside for him.

Spieth laughed. "I had to run to get past all the people so I could get here," he said, looking behind him. He had left his panting security coterie in the dust. He looked at Davis and smiled.

They discussed his round for a moment before Spieth was pulled away by a PGA official who knew that the various notebooks and cameras were in need of their daily Jordan-fix.

He shook Davis's hand a second time and headed off.

"I gotta find a way to get that kid to stop calling me Mr. Davis," Davis said with a laugh.

Good luck with that, Mr. Davis.

Flash forward one more time to Sunday evening on the 18th green. Spieth had thrown everything he had at Jason Day, shooting a 4-under-par 68 to finish at 17-under-par 271. If you had told Spieth before the week began that he would shoot 271, or on Sunday morning that he'd shoot 68, he would have signed for both, because those are winning numbers.

But Day was both brilliant and resolute all day and all week, bouncing back from every mishap with a huge drive or a huge putt or both. The fact that his 67 on Sunday allowed him to become the first player in history to finish a major at 20 under par wasn't that important. Pete Dye's golf course was still dangerous, but it was soft and attackable all week. Day just attacked it better than anyone.

And so, after Day tearfully tapped in his final putt, Spieth gave him a classy and heartfelt hug. No one watching was rooting for Spieth to lose but everyone in golf felt genuine joy for Day, not just because of all the near-misses in majors, but because of who he is and what he has been through to become a major champion.

That's why it wasn't at all surprising that – even as Colin Swatton, Day's swing coach and caddie and, more importantly, the man who rescued Day years ago in Australia after the death of his father, closed in for a celebratory hug that had been 15 years in the making - Day turned first to Spieth, took off his cap and accepted the hug. Then he wept on Swatton's shoulder.

There was nothing but class on that green.

A Spieth victory at Whistling Straits would have been historic. It would have made him only the third golfer to win three professional majors in one year, joining Ben Hogan and Tiger Woods, and do it at 22, younger than Woods and considerably younger than Hogan.

But there is no doubting that, as well-liked as Spieth is, there were smiles throughout the golf world when Day walked up 18 on Sunday with victory in hand and a broad smile on his face. There is also no doubt that there were some wet eyes in the locker room and even in the media tent when he broke down after lagging his final birdie putt to within a foot.

Just as tears of frustration had welled in Day's eyes at St. Andrews, when he left his final birdie putt a few inches short, tears of joy began gushing the moment when he realized the job was truly done. It was okay to leave this putt a tad short.

If you are reading this column, you no doubt know Day's backstory. His father's death when Day was 12. His being sent to Kooralbyn, a sports-specific school where he and Swatton found one another and, after a rocky start, became mentor and pupil, swing coach and player, and finally second-father and son.

There's no doubting the fact that Day's difficult upbringing gives him a different perspective on life than most professional athletes, just as Spieth's experiences with his sister Ellie have shaped his view of the world. Day is instensely competitive, as all great players are, but also unfailingly polite to everyone he comes in contact with and patient both on and off the golf course.

Early in his career, Day spent a good deal of time while on the Web.com Tour with Erik Compton, who makes a living playing golf even though he has had two heart transplants. That, too, helped him understand that there are many things more difficult to deal with in life than a bad bounce or a missed putt - even in a major.

"I watched what he went through every day just to play, just to live," Day said a couple of years back, referring to Compton. "We've all got issues we've dealt with and deal with. But watching Erik deal with his issues without ever complaining made me realize that my life hadn't been so tough."

But it does mean he has the resilience to deal with disappointments on the golf course and bounce back from them. Six days after that birdie putt came up short at St. Andrews, he had another birdie putt, this one to win in Canada. It slammed into the back of the cup. He could have missed it, but he wasn't leaving it short.

The top three players in the world right now, Spieth, Rory McIlroy and Day are all not yet 28 years old. All have won major titles. Throw Fowler into the mix and you have four superb young players - three of them major champions, one of them a Players champion - who are impossible not to like. All sorts of potential for rivalries and Sundays like the one at Whistling Straits are right in front of us.

Golf is in a very good place right now.

No doubt, Mr. Davis would agree.