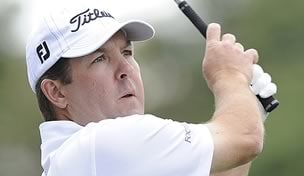 Bob Heintz signed his scorecard, walked out of the scoring area at Lake Jovita Golf and Country Club in Flordia and shook his head.

“Time to go scoreboard watch again,” he said with a wry smile. “I feel a little bit ghoulish standing there, hoping guys go backwards but I don’t have much choice.”

This was seven years ago at second stage of the 2005 PGA Tour Qualifying Tournament. Heintz had played the PGA Tour that year, but lost his card. He wasn’t alone. Among those playing second stage that year were Steve Stricker, Matt Kuchar, Steve Pate, Guy Boros and Mike Hulbert.

As it turned out, several players in the late groups went backwards on the back nine and Heintz survived on the number.

“When you see those big numbers go up you have mixed emotions,” he said. “You know it’s good for you but a lot of the time it’s someone you know and you feel bad for him. But in the end, if you’re being honest with yourself, you’d rather feel bad for someone who isn’t you.”

Three weeks later, at Q-School finals, Heintz felt bad for himself. He walked off the course after the sixth and final round and headed back to the scoreboard. This time there weren’t quite enough high numbers in the late afternoon and Heintz knew he was headed back to what was then the Nationwide Tour.

“In a sense, those two weeks were a microcosm of my career,” he said earlier this week. “I spent a lot of time staring at Q-School scoreboards. I always made my share of birdies, so what it came down to was that I always made just enough mistakes that, instead of walking to my car and saying, ‘OK, let’s go get ready to play on Tour,’ I was standing around hoping. Just think how much of that time I could have spent practicing.”

Heintz is now 42 and his days of staring at scoreboards are over. He was hired in September as the golf coach at the University of Pennsylvania, a return to his Ivy League roots. He was a three-time Ivy League champion at Yale, which was pretty good for someone who thought his best sport in high school was baseball. That’s not surprising, considering that his younger brother, Chris, was good enough to play for the Minnesota Twins.

However, three years after graduating from Yale, in 1992, he honestly didn’t think he was good enough to play on the PGA Tour.

“The first time I played (Q-School) finals, I felt completely overwhelmed, like I didn’t belong,” he said. “I played a practice round with Jesper Parnevik, who was moving from the European Tour to the PGA Tour. He had won, I think, the Scottish Open that year. He was so good. I felt completely intimidated before I’d hit a shot.

“I struggled on the Nike Tour in ’94 and didn’t even make it back to finals that year. My wife and I were getting ready to have our first child. There was also that question in my mind about is this what I should be doing with a Yale degree.”

He decided to put the economics degree to use in 1996 by going to work for Edward Jones, the investment firm. He did fine as a money manager but wasn’t especially happy doing it. He put on weight and began to look unhealthy to some of his friends. Finally, the week before Christmas in 1997, Dave Paterson, who had been his coach at Yale, showed up on his doorstep.

“He was in town (Tampa) doing something and we invited him to the house to dinner,” Heintz remembered. “I opened the door and his first words were, ‘Bob, you look like s----. Why aren’t you playing golf anymore?’”

Heintz explained that he had a newborn daughter and that he had run out of money trying to play golf for a living.

“Do you remember where you went to college?” Paterson asked him. “I can raise sponsorship money for you. Just give me the word.”

With help from Paterson and his father-in-law, Heintz headed off to Hooters Tour Q-School a couple of months later with a $40,000 head start.

“I wasn’t sure I could make it through their Q-School and then I ended up very high on their money list,” Heintz said. “That really helped my confidence. I learned how to play four-round tournaments week in and week out. I’d only been partially exempt on the Nike (Tour) in ’94 so I didn’t get to play that much. That was a big step for me.”

Heintz made it back to PGA Tour Q-School finals in 1998 and was fully exempt on the Nike Tour a year later. He won twice in ’99, including at the Nike Tour Championship, jumping him from 16th on the money list to sixth. In those days, only the top 15 automatically moved on to the PGA Tour.

“I went into that last tournament thinking I had two great chances to make the (PGA) Tour,” he said. “Even if I didn’t make the top 15, I was exempt into the finals (of Q-School) and I really believed I would make it. By then I knew I was good enough.”

Of course, good enough to make the Tour is different than good enough to stay on the Tour. Heintz was an exempt player on PGA Tour on five different occasions – once in 2000 and then four more times after surviving his Q-School scoreboard stare-downs. “Every time I made it, I made it close,” he said, laughing. “I never breezed.”

The last time he made it through the finals was in 2006. He played the last day with a very young and confident Anthony Kim and an older and very nervous Michael Bradley. “I’ll never forget the feeling being with those two guys that day,” he said. “Anthony hit driver every hole, just hit it and started walking to some place way past Michael and me. Michael wanted to make it back to the Tour so much I think he hit two drivers all day. I had to walk away from him a couple times because I could feel the tension dripping off him. Somehow, we all made it.”

Heintz came closest to winning on the primary circuit in 2010, when he got into the Reno-Tahoe Open as an alternate and had a 3 12-foot putt on 18 on Sunday to put himself into a playoff with Matt Bettencourt. “I tried to make sure I didn’t just wish the putt at the hole,” he said. “I got a little over-excited and pulled it.'

He admits that when he sees Bettencourt pop onto his TV screen nowadays, he still thinks back to what might have been. “He certainly made the most out of the win and good for him,” he said. “But every once in a while when I see him out there I think to myself, ‘Are you kidding me?’ But at least it gave me a teaching tool I can use with the kids I’m coaching now.”

Heintz began to look for his next chapter towards the end of 2011. He could feel himself running out of steam on the now Web.com Tour. With four kids at home, grinding it out, hoping to find something again, began to feel like too big a hill to climb. Then came the opportunity at Penn.

“It’s all new right now but so far I love it,” he said. “I’m learning as I go. In the fall tournaments this year I let my guys make mistakes on the golf course a few times because that’s how you learn. After they made a decision that went wrong I said, ‘Let’s talk about what went into that decision.’ It’s taken me a while to figure out how to best use my education. What I think I know now is the area where I have the most expertise is golf. So why not use that knowledge and be on a job that I really think I’m going to enjoy?”

There’s one added benefit to his new life: He doesn’t need to drag himself over to watch scoreboards any more.