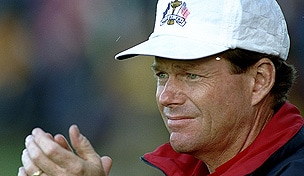 Getty Images
TURNBERRY, SCOTLAND - JULY 14: Paul Casey of England watches a shot during a practice round prior to the 138th Open Championship on the Ailsa Course, Turnberry Golf Club on July 14, 2009 in Turnberry, Scotland. (Photo by Ross Kinnaird/Getty Images)  -

When Tom Watson said Thursday he had been waiting 20 years to get the call asking him to captain the U.S. Ryder Cup team for a second time, he wasn’t exaggerating. The argument can be made that no one ever loved being a captain more than Watson or worked harder at the job.

Or did it better.

Watson won eight major titles, but he has often talked about his team’s 15-13 victory at The Belfry in 1993 as the most satisfying moment of his career.

“Not my greatest,” he said. “I didn’t do the playing, the team did. But the work that went into it, seeing the looks on their faces when we won that Sunday was something I’ll never forget.”

It is a feeling he fully expects to have again.

Watson, it should be remembered, was named the American captain shortly after the infamous “War by the Shore” in 1991. Although that Ryder Cup has since been glorified as a signature moment in golf history, it wasn’t looked upon that way in the immediate aftermath. The notion of American players showing up in fatigues to signal they were going to war was considered over the top by the Europeans. And the behavior of the American fans was also an issue.

Watson had two goals when he became captain: to win the Cup in Europe – he specifically asked to captain the team overseas – and to bring civility back to the Ryder Cup. That’s why he didn’t just meet with potential American team members, he also talked to several key people from Europe: captain Bernard Gallacher, Nick Faldo and Seve Ballesteros among them.

He also let potential team members know that he expected them to begin preparing for the matches long before they left for The Belfry. He wanted them to play money matches every Tuesday at Tour stops – not for yucks, but for real. No gimme putts from 5 feet. Don’t just play with your buddies, play with guys who might be your teammates.

Watson had only two captain’s picks and he made it clear he wouldn’t fool around with them. Some people were suggesting that John Daly should be on the team to intimidate the Europeans with his length. No, Watson said firmly, he didn’t want anyone on his team capable of quitting. Curtis Strange got semi-hot that summer – maybe he should be chosen. No, Watson said, he wanted consistency, not someone who had played well for a few weeks.

Strange was in an airport when he got a message to call Watson the night before the captain’s picks were named. “He just said, ‘You’re out, I went with two other guys’,” Strange remembered later. “I liked that. It told me he knew exactly who he wanted.”

There were no apologies, no ‘it could have been you’ speeches. Raymond Floyd and Lanny Wadkins – a past captain and a future captain, both tough guys like Watson, were named.

If there was any doubt about who was in charge of that team it dissolved after several players objected to going to the White House to meet with President Bill Clinton before getting on the Concorde. Watson, every inch the Republican that the other members of the team were, told his players to shut up and show up.

“We’re representing the United States and he’s the president,” he said. “We go and we show him the respect he deserves. Period.”

Before he assembled his team, Watson went to see Roy Williams, then the basketball coach at the University of Kansas. Watson had never been a coach before and he wanted some advice from someone who had been a successful coach.

“Tell your guys that there’s nothing better when you’re playing on the road to hear the sounds of silence,” Williams counseled – a lesson he had learned from his coaching mentor, Dean Smith. “Tell them to listen for the silence.”

Watson did just that. He also put a ‘thought for the day’ at the top of the schedule each player received every morning. On Friday, the first day of the matches, his thought was direct: “Remember,” it said, “Everything THEY invented, WE perfected.”

His players loved that. On Sunday afternoon, Watson was standing in the 18th fairway watching Paul Azinger and Nick Faldo finish the final singles match. After trailing 7 1/2 to 4 1/2 on Saturday morning, the U.S. had roared back and the cup had already been clinched as Watson watched Azinger and Faldo line up their meaningless putts.

Davis Love III, a Ryder Cup rookie that year who had made the putt that had clinched the U.S. at least retaining the cup, sidled up to Watson.

“The silence,” Love said, grinning. “Listen to all the silence.”

Watson has never made any secret of his desire to be the captain again. As far back as 2004 he talked about how frustrating it was to watch the Europeans play with so much confidence and bravado while the Americans played – in his opinion – not to lose. After the embarrassing loss at the K Club in 2006 he talked about the need to change the culture of the American team.

“We haven’t been a team recently,” he said not long after that defeat. “We’ve been 12 guys in a room. Nothing more.”

I asked him then if he would be willing to captain the team again.

It was clear even then that he had very definite ideas about what he would do if he ever got the chance to captain again. You can bet those ideas are already being put into motion right now.

Watson’s challenge at Gleneagles will be entirely different than it was at The Belfry. In 1993, he played regularly with potential team members because he was still on Tour. Many of the players who will be on this team have never played with him. He will also have to deal with the care and feeding of Tiger Woods – a challenge for every U.S. captain (except Paul Azinger in 2008) since 1997. And he will be facing a European team that believes it is always destined to find a way to win – having done so in seven of the nine Ryder Cups since Watson was captain.

Chances are Watson already knows how he will handle those issues. Woods said all the right things publicly about Watson on Thursday, but knowing his history of holding a grudge, there’s no doubt he and Watson will sit down and talk. Watson won’t coddle him or ask him to forgive him for being critical in the past. He will say something like this: 'Tiger I need you to play well for us to win. And YOU need to play well too in order to put your Ryder Cup past behind you. You don’t have to like me to do that, you just have to walk into the room with the approach that nothing has ever mattered more in your life than playing three good days of golf over there.'

On Thursday, after he was formally named captain, I sent Watson an email congratulating him. His response was simple and direct: “The journey begins!”

There is no doubt it will end on Sept. 28, 2014, as dusk approaches in Scotland with Watson holding the Ryder Cup in his hands one more time.

Note: John Feinstein is author of 'Caddy For Life – The Bruce Edwards Story,' which chronicled the life of Tom Watson's longtime caddie Bruce Edwards, who died of ALS in 2004. He and Watson co-founded the Bruce Edwards Foundation, which raises money to support research efforts to find a cure for ALS.