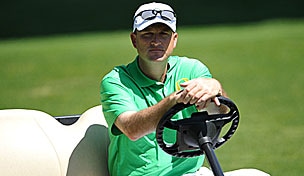 Getty Images
NORTH PLAINS, OR - AUGUST 28: Anna Grzebien tees off on the 15th hole during the first round of the Safeway Classic on August 28, 2009 at Pumpkin Ridge Golf Club in North Plains, Oregon. (Photo by Steve Dykes/Getty Images)  -

When his players have the chance to take part in PGA Tour Qualifying School each fall, the golf coach at the University of Oregon gives them a little pep talk.

“I tell them to try not to make a big deal of it, to try to treat it as if it’s like any other tournament,” he said. “I remind them they can all play well enough to succeed as long as they don’t freak out.

“The freak out thing is the problem.”

Casey Martin, now in his seventh season as the coach at Oregon, speaks from personal experience on the subject of Q-School. “Q-School is really about mind control,” he said on Tuesday, just before heading out to practice with his team. “You can never completely keep the reality of it out of your mind. You’re playing for your job and your future. Deep down, you know that. But if you can keep yourself convinced that you’re just playing golf and let your talent take over, then you’ve got a chance to succeed.”

Martin may be the best-known player to never get all the way through Q-School. He reached the finals three times. Once he missed qualifying for the Tour by one shot. In 2002, he was comfortably inside what appeared to be the number needed to make the Tour heading to the back nine on the final day and then, to his way of thinking, lost control of his mind.

“I hit two really bad shots, both irons, both yanked left,” he said. “The first was with a 5-iron on a par 3, I think it was the 13th (at the TPC Stadium Course at PGA West) and the second was a dead pull second shot on the next hole. I ended up making double-bogey on both holes and went from inside the number to outside the number and couldn’t recover.

“That one really tore my heart out because I was able to control my mind the way I needed to do for six days and more than 100 holes. Then, just like that, it was gone.”

Martin’s close calls are not the reason for his fame. He’s famous as “the golfer in the cart.” He has battled Klippel-Trenaunay-Weber syndrome since birth, a birth defect in his right leg that has made walking difficult his entire life. In1997, after he had gotten through the second stage of Q-School, he remembers telling a PGA Tour rules official that he would need to use a cart during finals.

That was when the trouble began.

“Until that year players had been allowed to use carts at all three stages of Q-School,” Martin remembered. “They had changed it that year so you weren’t allowed to use carts in the finals. I had used a cart at second stage because they were still allowed. When I made it through and I let this guy know I’d need a cart at finals he looked at me as if I had just said the single most outrageous thing anyone had ever said to him in his life.”

The Tour tried to block Martin from using a cart. He went to court and got an injunction that allowed him to use one. Several other players also used carts during those finals. Martin didn’t make the Tour but did make it to what was then the Nike Tour and promptly won his first tournament to start 1998.

His success caused an uproar on Tour, dividing the locker room. Some players insisted they had physical issues that should also allow them to use a cart. Others insisted that walking was a part of the game. Others saw Martin’s side: he had a disability that made him subject to the Americans With Disabilities Act and thus should be allowed to use a cart.

It wasn’t until 2001 that the Supreme Court ruled 7-2 in Martin’s favor based on the ADA and allowed him to continue to use a cart. By then, Martin had made it to the PGA Tour in 2000 by finishing 14th on the Nike Tour money list in 1999. He failed to keep his card in 2000 and had to occasionally endure hearing fans yelling, “cheater,” at him.

Through it all his friendly demeanor never changed. Perhaps it was coincidence, but Martin never played as well as he had in the past after the Supreme Court ruled for him. Or perhaps he was just worn out.

“It certainly wasn’t an easy experience,” he said. “There were things said that were hurtful but I also got a lot of support that meant a lot to me. It really came down to a simple thing: I wanted to play golf and I thought I was a pretty good player. But there was no way I could compete if I had to walk 18 holes every day. My body just couldn't take it.”

Anyone who has ever watched Martin play would attest to the truth of that statement. Even as far back as 1998, when he tied for 23rd at the U.S. Open at the Olympic Club, it was painful to watch him try to walk up hills to greens or climb in and out of bunkers.

That was part of the reason why so many players came around to his side of the argument: once they saw how difficult it was for him to play, even in a cart, they understood this wasn't the same as a sore back. The other reason was Martin: he is impossible not to like – unfailingly friendly and honest and never one to make excuses for what he bluntly calls, “my failures as a golfer.”

He never did become the star he had hoped to become. He played one year on the Tour and was fully exempt on what is now the Web.com Tour through 2003. Being back there was especially disappointing after his near-miss at Q-School in 2002. He continued to play Q-School through 2005 but knew by then that his window was closing.

Even while he was preparing for Q-School that year he was talking to Oregon about possibly coaching there. He worked as a volunteer coach in the spring of 2006 before being named head coach that summer.

“It’s been the perfect fit for me,” he said. “I’m in the place where I grew up, I enjoy getting out to work with the kids on the team and I’m not sitting at a desk all day. I’d be lying if I said I don’t miss competing on a regular basis. That’s not something you ever lose.”

Martin still plays on occasion – he qualified for the U.S. Open at Olympic in June and missed the cut by a shot – and admits that playing competitively both exhausts and exhilarates him.

“At this point in my life (he just turned 40) I wouldn't consider trying to play again. Travel like that would be too tough. My leg doesn't do well on long airplane trips and I really was exhausted after the experience at the Open this year,” he said.

He’d like to try to qualify for the U.S. Open at Merion next year. Q-School he can live without. “It’s hard for me to come up with any memories of Q-School that are funny or that fond,” he said. “Mostly I remember the epic fail in ’02. I guess that was like a lot of my career: I was close but not quite where I wanted to be.”

Martin is too tough on himself. Given what he had to overcome physically, emotionally and legally, his accomplishments in golf are remarkable. Years ago, while his case was still in the courts, he often said that he didn't want to be remembered as, “the golfer in the cart.”

“Being honest, when people recognize me or think they do or when my name rings a bell, most of them say, ‘oh yeah, you’re the guy with the cart,’” he said. “I would have liked to have done more but at least I think I can say I did the best that I possibly could.”

He should also be remembered as the guy with a lot of heart and a lot of guts.There was a lot more to Casey Martin than a bad leg and a golf cart.