Politics, Tiger and the Tour 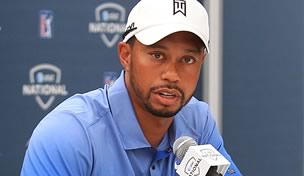 It began as a slam dunk, a tap-in for the world’s greatest golfer. The AT&T National hosted by Tiger Woods swept into the nation’s capital in 2007 as a godsend for the city and as a vetted big-time event on the PGA Tour before anyone teed up a ball.

The timing was close to perfect in every way: The Tour had stripped Washington of its status as an annual PGA Tour stop in 2006, offering what had been the Booz Allen Classic a slot as part of the Fall Finish, which the sponsor turned down.

There was a considerable amount of criticism attached to both the Tour’s decision to abandon Washington and the way in which it handled that decision. Finchem certainly heard those voices. And so, when The International, one of the player’s favorite Tour events, also went dark because it lacked a sponsor, Finchem saw a perfect storm.

Woods, the best and most popular player in the world at the time, wanted his own event. He wanted it in a major city on a big-time golf course. Even though he had never played the old Tour stop in Washington, that would change if the event had his name on it and was played at a top club like Congressional.

And so, in about 15 minutes, a new PGA Tour stop was born. AT&T – then one of Woods’ sponsors – jumped on board as the title sponsor and the late Ben Brundred Jr., the longtime executive director of the D.C. stop and Congressional’s most influential member, convinced the membership to give up the club for Fourth of July weekend.

The Tour instantly slotted the tournament into a primo date – the middle week of the three between the U.S. and British Opens – and a match made in heaven was born. The new tournament was expected to step right into the first tier of non-majors along with The Players, Memorial and Bay Hill. Woods’ presence every year, along with Congressional as the site, essentially guaranteed the event's future.

It hasn’t quite worked out that way.

In 2007, almost every big name on Tour turned up for the inaugural ‘Tiger.’ Even Phil Mickelson, never mistaken as Woods’ best friend, showed up out of respect for the host and the venue. The crowds were huge, the weather was hot but bearable and most went home happy.

Then the Good Ship Tiger – and thus his event – began taking on water. The trouble began when Woods couldn’t play in 2008 because of major knee surgery shortly after winning the U.S. Open. Most connected to the tournament understood that Woods wasn’t going to play but the sponsors and members weren’t thrilled when he couldn’t spend a day on site glad-handing with the people who put up the cash to hold the tournament.

A month later, Woods did make it to Washington for a ‘town hall meeting,’ where Congressional’s members (full disclosure, I am one of them) were briefed by the tournament host and Finchem about the future of the event. With the tournament scheduled in Philadelphia in 2010 and 2011 – because of the U.S. Open being held at Congressional – the question was whether the Tiger Woods Foundation and the club wanted to renew their contract since the first three-year deal wasexpiring.

Woods was at the height of his popularity at that point, a little more than a month removed from winning his 14th major title. Still, he and Finchem were met with considerable skepticism that night by a membership that liked the money thetournament brought but didn’t like the intrusions it brought to club life.

At one point a woman stood up and asked Woods, “Why exactly would we want to continue doing this?”

Woods, in his uniquely dismissive way, looked at her and said, “I can’t think of a reason why you wouldn’t want to do it.”

Congressional voted to sign a new deal. Barely. The vote was 52 percent to 48 percent andprobably would not have passed if the board of directors hadn’t pushed so hard and if Finchem hadn’t implied during the meeting that the date might change in 2013 when new TV contracts were signed. The deal was for three years with both sides having an option to get out at the end of 2014 or agree to go forward for another three years.

Then came the fire hydrant.

If the Congressional membership was split on the issue of Woods’ event prior to that it wasn’t afterward. The USGA has made it clear to the club that it will not get a U.S. Open in the future if it is still hosting a PGA Tour event which means Congressional can’t show Tiger the door fast enough.

Except for this: There’s a contract for the next three years. Reportedly, the folks at Aronimink, who were less-than-happy with the way Woods conducted himself last year, were charmed last week by the new Tiger who didn’t play, but showed up and did everything but kiss babies.

So, perhaps Aronimink will take over the contract from Congressional. Maybe it will host for at least one more year to give Congressional a chance to catch itsbreath after hosting the Open. One thing is for sure: Congressional will not be the tournament’s long-term host. There has even been talk that, to keep the tournament in Washington, it might be moved to the newly-renovated TPC Farms at Avenel.

The renovated golf course got good reviews from the senior players last fall but does not carry the reputation of being a top-notch course among most Tour players. Davis Love’s long-ago line about Avenel still resonates: “It isn’t a bad golf course…unless you have to drive past Congressional to get there.”

This year’s AT&T field wasn’t much better, if at all, than the fields at Hartford two weeks ago or John Deere this week. Most of the big names were either resting or playing overseas to get ready for the British Open. The obligation to the world’s 17th-ranked player to show up at his event apparently isn’t the same as the obligation to show up to play for an event hosted by the greatest player of our time.

And the world’s former No. 1 is still day-to-day, when it comes to playing golf. Last week he was Billy Payne with a goatee.

Of course a year from now he might be No. 1 again and the tournament might be back at Congressional. But nobody knows. And the future of a Tour stop that was once as glittering and glitzy as anything you could find outside the four majors is murky and uncertain.