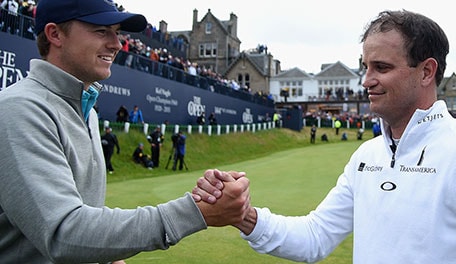 In 1974, after Hale Irwin had won the U.S. Open at Winged Foot with a score of 7 over par, the late, great Dick Schaap wrote an entire book on that remarkable four days. The title was “Massacre at Winged Foot.”

The only thing lacking right now for a book on the five days that finally ended in the gloaming at St. Andrews on Monday is a title. Perhaps, something simple like “Marathon” would fit.

Without question, there were enough storylines for a book – a long one at that.

Consider this for a moment: the continuing saga of Tiger Woods was little more than a footnote. Rory McIlroy’s absence was barely noticed once the championship began. Tom Watson’s farewell was sweet and joyous but was on almost no one’s mind even a little bit as Monday’s drama slowly unfolded. Phil Mickelson didn't make many headlines all week, but one of them was his caddie for life, Jim Mackay, looping back onto the golf course on Sunday to get a close-up glimpse of Jordan Spieth.

The weather is often a part of the storyline at the Open Championship and that was never truer than it was the 144th time that they have played for this title. The dire predictions that were heard early in the week didn’t turn out to be entirely correct, but they were accurate enough to force a Monday finish for the first time since 1988 and for the second time in history.

When they played on that Monday at Royal Lytham & St. Annes, Seve Ballesteros shot 65 to win his third Open title and his fifth major. It was his last major victory. He was 31 at the time and there was no reason to suspect that he would never again hoist a major trophy.

Zach Johnson is 39, a couple months younger than Woods, and has quietly put together what is now a likely Hall of Fame resume.

Much like Spieth, Johnson doesn’t blow anyone away with his length, but has a mental toughness that has allowed him to put together a record that looks like this: 12 PGA Tour wins, two of them majors, and four Ryder Cup appearances, that will no doubt become five next August. One other stat: He’s now 4-1 in playoffs. His only loss came to Spieth, at the John Deere Classic two years ago. That playoff went five holes and ended with Spieth’s first victory.

Nine days ago, Spieth won the Deere in a playoff again – this time beating Tom Gillis. One shot out of the playoff after missing a birdie putt on the 18th hole? Johnson.

Of course neither Spieth nor Johnson should have been in southern Illinois that weekend. They should have both been in Scotland preparing to play St Andrews – especially Spieth, who was trying to make history by becoming the second player (Ben Hogan, 1953) to begin a year by winning the Masters, U.S. Open and British Open.

Spieth though, is a believer in doing the right thing, which is why he played in the John Deere. He had played there on a sponsor exemption in 2013, and he thought he owed it to the tournament organizers and sponsors to come back now that he’s a star and his presence means something to the event. Johnson, who is from Iowa, is also a past Deere champion (2012) and is a local hero. So, he plays annually and then hops on the Sunday charter the tournament supplies for those players to get across the Atlantic Ocean.

Apparently, both Johnson and Spieth knew what they were doing because, even arriving jet-lagged on Monday, they played superbly when everyone began keeping score on Thursday morning.

And, while Johnson’s victory and Spieth’s near-miss – to call it a loss seems terribly unfair – were stories 1 and 1A after Johnson had finally lifted the claret jug, the list of dramatic storylines that unfolded was almost never-ending.

There was Louis Oosthuizen, trying to win the Open at St. Andrews for a second consecutive time, having run away from the field in 2010 for a seven-shot win. By losing in the playoff, Oosthuizen has now finished second in three of the four majors: he lost to Bubba Watson at Augusta three years ago in a playoff and tied for second with Dustin Johnson a month ago at Chambers Bay after shooting 77 the first day.

Speaking of Dustin Johnson, his meltdown this time around wasn’t nearly as dramatic as the three-putt on the 18th hole on Sunday at Chambers Bay but, in its own way, it was equally stunning. After overpowering the golf course for two rounds (over three days) to lead at 10 under par, Johnson shot 75-75 the last two days to drop from first place to a tie for 49th. On Sunday, he beat one player among the 80 who made the cut – Ryan Fox, who shot 76. On Monday he beat five players.

Johnson is a breathtaking player to watch when he is at his best. He is also breathtaking to watch at his worst. Everyone knows his best 72 holes on a major weekend will be plenty good enough to win. The question remains whether he can get to that finish line. Seventy-one good holes, as Johnson has painfully learned, aren’t good enough. Neither are 36.

One of the players Johnson beat on Monday was Paul Dunne, the Irish amateur who went from playing in the NCAA Championship for UAB a couple months of ago, to being tied for the lead at the Open Championship after 54 holes, a feat last accomplished by an amateur 88 years ago when Bobby Jones had the 54-hole lead. It was entirely predictable that Dunne came apart and shot 78 playing in the final group with Oosthuizen on Monday, but he too was an amazing story.

So was Marc Leishman, who shot 64-66 the last two days to get into the playoff, four months after he thought he might lose his wife, Audrey, to a rare disease called myopathy that causes muscles to stop functioning. Audrey has recovered and was home with their two children watching her husband almost win the Open. After his ball landed in a divot on the first playoff hole leading to a bogey, Leishman summed up the entire week best: “In the end,” he said, “it’s still just golf.”

Not surprising that he would take that approach.

There were other stories: Adam Scott bolting into contention Monday, then melting down (40) on the back nine and, of course, Jason Day coming <em>so</em> close yet again, his putt to get into the playoff on 18 stopping several inches short of the cup. “There will be other majors,” he said resolutely. One hopes that he will win one soon.

In the end though, the story of “Marathon” will focus on two men: Zach Johnson and Jordan Spieth. Johnson was absolutely brilliant on Monday, shooting 66, including a twisting 25-foot birdie putt on 18 that he absolutely had to have, and a 1-under performance, after starting birdie-birdie, in the playoff. His 15-footer on No. 1 right on top of Oosthuizen’s opening birdie, might well have been the turning point of the soap opera that didn’t end until Oosthuizen’s miss for birdie on 18 almost an hour later.

In his own way though, Spieth was every bit as extraordinary as Johnson. There was no doubting his disappointment when his final birdie putt from the Valley of Sin veered 2 inches left, meaning he would finish one shot out of the playoff. And yet, after an exhausting, pressure-filled week, he not only went through all the post-round interviews, he went back outside to the back of the 18th green to watch the playoff finish.

When it was over, he was one of the first to congratulate Johnson. One thing we know for certain about Spieth: he wins with class and he loses with class. That, in itself, is breathtaking to watch.