DJ and the USGA: What should have happened 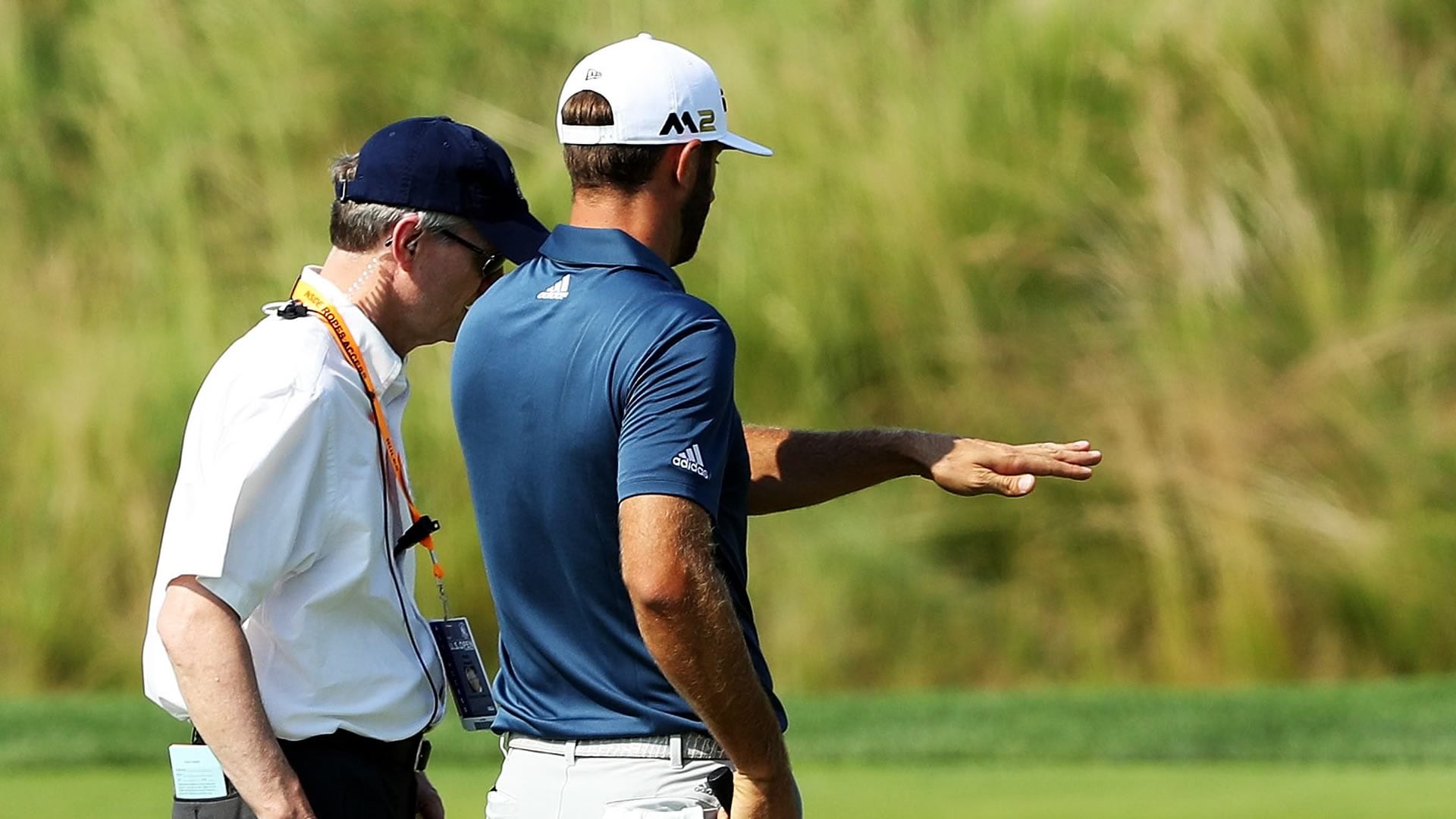 • Dustin Johnson’s Sunday performance at Oakmont was one of the best final rounds anyone has ever played in a U.S. Open – or any major – especially given the uniquely confusing circumstances.

• Oakmont remains one of the great Open venues – although the USGA may need to give some thought to just how far it wants to go with green speeds. Four players broke par even on a golf course that played soft for most of three rounds.

• The USGA should seriously consider tithing 10 percent of the annual money it is paid by Fox to Johnson for winning as easily as he did. If Johnson had finished one stroke ahead of Jim Furyk, Shane Lowry and Scott Piercy rather than four or tied with the three runners-up, Oakmont ’16 might have been remembered as the worst debacle in golf history. It would have been Augusta ’68 and Whistling Straits ’10 combined.

Now, for some biased observations, because all observations are biased. My bias may be unique among those who are going to talk and write about what happened on Sunday because I like the USGA. I wrote a book 16 years ago about the first Bethpage Black Open (cleverly titled, ‘Open’) and those who work for the USGA not only made the book possible with extraordinary access, but went out of their way to make the process enjoyable. To this day, many of those people – including executive director Mike Davis – are still with the USGA and are people I consider friends.

So, there’s my disclaimer.

Everyone knows there is no grind like that of a U.S. Open. The logistics are always difficult for everyone. On Tuesday, when Masters champion Danny Willett tried to walk across the street from the house where he was staying to the front entrance to Oakmont, he was told he couldn’t walk in: he either had to go back to his house and get his car to drive about 200 yards or walk down the street and around the corner to a walk-in entrance.

On Thursday, when several players found shelter in the media center during the first rain delay, a couple of them were told in the dining area that they couldn’t get something to eat because they didn’t have media credentials. It took several media members explaining who they were and why they were there to get them food.

Then there’s the golf course. Davis is one of the most affable and likeable men on earth, but when he insists each year that the USGA doesn’t care what the winning score is, it’s impossible not to think he’s got his fingers crossed behind his back as he’s speaking.

“They want the winning score to be even par,” Jordan Spieth said. “That’s not opinion, that’s fact. Just look at history.”

In fact, the last time the Open was at Oakmont in 2007, Angel Cabrera’s winning score was 5 over par. Had the rain not intervened, it is likely Johnson’s winning score would have been a lot higher than 4 and a half under par. (More on that in a minute). Make no mistake though: Johnson was going to win this championship. He came out crushing the ball – not making a bogey for his first 27 holes – and even though he sputtered a little in the third round, shooting 71 while Lowry was shooting 65, he never blinked. He just kept blasting drives and hitting towering irons. Only his putter kept this from being a runaway.

Okay, let’s talk about the mysterious moving golf ball. Back to indisputable facts: As Johnson stood over a 4-foot par putt on the fifth hole, he took two practice putts and then began to putt his putter behind the ball. Before he placed the putter in address position, it somehow rolled a couple millimeters backward.

Johnson backed off the ball right away and looked first at his brother, Austin, who is his caddie, to say the ball had moved and then told playing partner Lee Westwood what had happened. He called in Mark Newell, who was the walking rules official with the group (and is chairman of the USGA’s rules committee) and told him what had happened.

Newell nodded and said, “just play it as it lies.”

The implication was clear: based on Johnson’s description of what happened, Newell did not think he had caused the ball to move.

Naturally, the USGA’s phones started ringing because there are always people watching at home who are looking for an ‘aha!’ rules moment and Jeff Hall, the USGA’s director of rules and championships, got a call saying he might want to look at the video.

Hall was on the golf course, roving, in case there was any sort of rules or pace-of-play issue.

Quick interjection: Hall is one of the USGA people who was so helpful to me in 2002. He’s smart, dedicated and wants what is best for the game.

Hall looked at the tape, then called in Thomas Pagel, the USGA’s director of rules to look at the tape. Based on what happened later, it’s pretty clear that Hall and Pagel decided Johnson should be penalized. That’s when they went to tell Johnson on the 12th tee that he might be penalized at the end of the round. In truth, there’s almost no doubt he was going to be penalized.

Somehow, Johnson didn’t let the uncertainty of it all get to him. He played brilliant golf down the stretch while the other contenders were fading. This Open will be remembered for many things, but the memory we should all hang on to is the way Johnson played the 18th hole, one of golf’s toughest closing holes. He bombed a drive, hit a stunning 6-iron to 3-feet and knocked the putt in for a dagger-through-the-heart birdie. Undoubtedly, no one was happier to see him pull away the last few holes than the USGA.

I think I know the rules of golf pretty well. But I’m not an expert. So, Monday, I called several people who are. Here’s the consensus – and it is pretty much overwhelming – of what they said.

Newell’s initial ruling, that Johnson didn’t cause the ball to move, was almost certainly correct. That said, there was nothing wrong with Hall and Pagel taking a look at slo-mo replay in case they saw something that Johnson couldn’t see.

Once they decided that Johnson had caused the ball to move, which they clearly did when they looked at the video, they should have told him that. You can’t ask athletes in any sport to play without knowing the score. Although Johnson had the right to appeal the ruling once his round was over, he almost certainly wasn’t going to get it changed. It was a subjective decision and Hall and Pagel had made their decision.

Finally, there’s the issue of benefit of the doubt. Most players, if they are in doubt about a possible violation, will err on the side of caution and penalize themselves. But they do not have to do so. They are allowed to give themselves the benefit of the doubt, if there is doubt. Clearly, there was doubt here. Unless Hall and Pagel were 100 percent certain that Newell’s initial ruling was wrong, they should have left his call in place. If you watched that replay 10,000 times you couldn’t possibly be sure that Johnson caused the ball to move.

Finally, there’s this: some (not all) of the officials believe – though there’s no doubt the USGA will deny this for the next 100 years – that if Johnson had won by one or tied for first, the penalty would not have been called.

Ironically, if that were the case, it would have been the right decision. Johnson’s brilliance allowed them to stand behind a call that shouldn’t have been made in the first place.

In 2010, Johnson was hurt at Whistling Straits when David Price, the walking rules official with his group on the last day of the PGA Championship under-officiated – failing to remind him he was in a bunker, even though it looked more like a sandy garbage pit than a bunker. Price should have simply said, “you know you’re in a bunker there, right Dustin?” but failed to do so.

Sunday, Johnson could have been hurt by over-officiating and Hall and Pagel intervening when no intervention was necessary. This time though, he overcame the officials. In time, we can all hope that’s what we will all most remember about this U.S. Open.