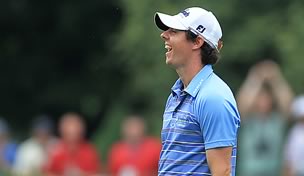 BETHESDA, Md. – There has been a lot made the past few days about Rory McIlroy’s trip to Haiti last week, which is understandable. Upon his return, McIlroy spoke eloquently about how the devastation he saw shook him and made him think about how lucky he is to be living the life he is living.

And so, the oldest cliché in sports was put into play: McIlroy’s trip helped him put his meltdown on Sunday at Augusta into perspective.

McIlroy already had plenty ofperspective. That was evident in the moments after he signed for an 80 on that April Sunday and finished the Masters in a tie for 15th place after leading by four shots going into the final round. At a moment when almost every golfer in the world would have bolted the grounds, he stayed and answered every question.

It was the most impressive post-collapse performance in golf since 1996, when Greg Norman blew a six-shot Sunday lead at Augusta and behaved with equal grace in the face of a humiliating defeat.

Of course Norman was 41 at the time and had been through the ups and downs that come with life in the professional golf fishbowl. McIlroy was not quite 22. Had he said, ‘not today fellas,’ – the way Dustin Johnson did after falling apart at Pebble Beach a year ago – no one would have blamed him.

On Tuesday, relaxing in the Congressional locker room after playing nine holes, McIlroy smiled when someone complimented him on the way he had handled himself at Augusta.

“I had a lot of time to think about what I was going to say didn’t I?” he said with a smile. “It was a round of golf – a bad one. But that’s all it was, nothing more.”

Clearly, McIlroy believes that. And based on his stunning play for 36 holes this week, he wasn’t shaken by what happened to him. Athletes often claim that a collapse or a shocking defeat doesn’t really bother them much. Then, years later, they admit that they were never quite the same after that loss.

McIlroy’s collapse is probably more analogous to Watson’s 79 at Winged Foot in 1974 when Watson was 24. Watson learned from his loss and it appears that McIlroy did too. Of course there are still 36 holes to go in this U.S. Open and no one is writing McIroy’s Hall of Fame induction speech just yet.

But there are some things about McIlroy that are certain: He is as mature, bright, likeable as any young player the sport has seen in a long time. When someone asked McIlroy after his opening-round 65 about his ability to lead the next major after the Augustameltdown, he laughed and said, “I guess it shows that I have a very short memory.”

What really tells the tale about McIlroy is what other players say about him. When the Tiger Woods burst onto the scene in 1996, others were awed by him. They understood he was going to win and win often. But they didn’t necessarily like him.

Some of it was jealousy. Some was the simple fact that Woods rarely spent much time hanging out with anyone, except Isleworth neighbors Mark O’Meara and John Cook. Even they have always been kept at arm’s length.

There are plenty of reasons to be jealous of McIlroy. He isn’t Woods but he’s a huge talent who is already a millionaire many times over. His demeanor and smile make the girls sigh and the sponsors come running. He’s the son everyone would love to have.

So, here’s a small sampling of what players were saying about McIlroy – the person – on Friday.

Sergio Garcia, at 2 under par, nine shots behind McIlroy, smiled and said, “I really hope he can win.”

Brandt Snedeker, who is also 2 under said, “If he wins, it will be great for the game.”

It isn’t because the game needs another great player with Woods’ career in limbo and Mickelson’s future uncertain. It’s because McIlroy has the ability to become a champion who won’t just be respected for his talent but will be genuinely liked because he’s likeable in every possible way.

If he continues to dominate this weekend there will be inevitable comparisons with Woods’ performance at Pebble Beach 11 years ago. That’s unfair. That tournament was the beginning of arguably the greatest streak in the history of golf.

That’s not a comment on Woods’ personal problems. Long before any of that happened, Woods had little time to sign autographs, almost never stopped to talk after a poor round of golf and acted as if there was a conspiracy against him on rare occasions when he missed a key putt.

Right here at Congressional 14 years ago, he stormed off after an opening-round 74 and then showed up all smiles a day later after a 67 saying it was unfair that he was asked to talk when he wasn’t on the leaderboard. On the same day that Woods stalked off players like Mickelson, Norman, Davis Love and Fred Couples – all of whom shot a score equal or higher than Woods – talked to the media and stopped to sign autographs.

Woods was just 21 at the time, but that’s the same age McIlroy was on that April afternoon in Augusta two months ago.

Everyone connected to golf will be overjoyed if McIlroy leaves Congressional with the U.S. Open trophy in his possession.