A twist of fate 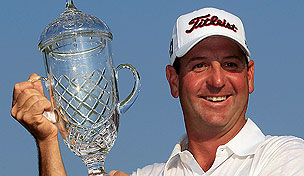 When the AT&T National begins Thursday in Philadelphia, Harrison Frazar will be there. No one will be more surprised than Frazar.

A month ago, Frazar was 99 percent convinced that this week would be the first week of his life as a non-golfer. He had been offered a job by a sports marketing company in Dallas to take over one of their divisions. He had told the company he was almost certainly going to accept the job.

“I had dinner with eight guys from the company last month after I missed the cut in New Orleans,” he said. “Some friends of mine set it up. I really liked them and when they made the offer I said, ‘I’m there. I’m 99 percent sure I’m going to say yes. But I promised myself I’d play through the U.S. Open this year and I’m going to do that.’”

His decision to walk away was all but made so Frazar began preparing for the final chapter. He would play the Byron Nelson Championship in his hometown; play U.S. Open qualifying and then play Memphis. He thought that Hartford would be his final tournament because he had started the year with an 11-tournament medical exemption and Hartford would be his 11th – and, he presumed – last tournament.

“The morning after I had dinner with those guys I went to play a practice round for the Open qualifier with Justin (Leonard),” he said. “We got to the third green and he gave me this look and said, ‘something’s different about you today. You just seem more relaxed. More like your old self.’”

The old Harrison Frazar reached the PGA Tour in 1998, less than two years out of Texas (where he had been a teammate of Leonard’s) and instantly became a solid player. He almost won as a rookie – T-2 at the Nelson – and for the next nine years was a consistent player, never out of the top 100 on the money list.

Life changed, as it always does, when his children began arriving. His son Harrison came along in December of 1999 after a scare in the delivery room when his heart stopped beating at one point.

“That scared me and changed me,” Frazar said. “There’s a saying on Tour that you have to be selfish to be successful and there’s something to that. You have to be able to put the other things in your life out of your mind and go out and play. You have to be able to get on that plane on Sunday night and not feel guilty and not miss your kids. The first couple of years it wasn’t all that bad. Harrison had an American Airlines gold card when he was seven months old.”

Two more children came along and travelling with three young boys became close to impossible. Leaving home got more difficult and so did golf. In 2007, for the first time since he had turned pro, Frazar finished out of the top 125 on the money list, dropping to 132. A year later he finished 163rd.

Late in 2008, Frazar played well at Disney (T-14) and the second stage of Q-School to make the finals. He almost didn’t go though because his youngest son, Slayden, needed reconstructive kidney surgery two days before Thanksgiving – four days before Harrison was supposed to leave for the finals.

“I remember sitting there in the hospital thinking the idea of going to play golf was insane,” he said. “Here’s my little boy with tubes coming out of his back going into his diaper and I’m going to play golf? My wife (Allison) finally told me he was fine and I should go play. Maybe because I didn’t really care that much I played the best I’d played in years.”

He not only made it through, he won Q-School, shooting a 59 in the fourth round. He stayed exempt in 2009 before poor play and recurring injuries to his hip and shoulder forced him to shut down midway through 2010. He started 2011 needing to make more than $600,000 in 11 events or lose his status again. After New Orleans he had missed five consecutive cuts and $600,000 might as well have been $6 million.

“In my mind, especially after I talked to those guys about the job, this was the end,” he said. “I was going to play the Nelson, Memphis and Hartford and that was going to be it.”

But funny things began to happen after that practice round with Leonard. He made it through the Open qualifier. That meant the Open would be his 11th and final tournament.

“I didn’t realize if I qualified for the Open that would count against the 11,” he said. “I called the tournament director in Hartford and told him what had happened and asked if he could give me an exemption. He was really nice but said he didn’t have any left. So, I figured the Open would be it for me.”

Then came Memphis. Relaxed, confident, with nothing to lose he moved into second place behind Robert Karlsson on Saturday. By the time he got to 18 on Sunday, he had a one-shot lead. Heart pounding, he pulled his second shot into the water and made bogey. Playoff.

It was at that moment that Allison and the kids had to get on the plane in Dallas to fly to Washington where they were supposed to meet Harrison that night. As Allison boarded, her cell phone was bombarded with texts giving her updates on the playoff. Finally, with Karlsson and Frazar headed to the third playoff hole, the flight attendant told her she had to shut the cell phone down since they were about to turn onto the runway.

“So they’re on the runway and she sees a call come up because she hasn’t turned the phone completely off,” Frazar said, his voice filling with emotion even as he smiled in the retelling. “She looks around and grabs it and one of our friends says, ‘Harrison won! He won!’ And then the signal goes out because they’re going down the runway.

“She bursts into tears and tells the boys who start telling everyone on the plane – there were a lot of golf people heading to the Open on the flight – and everyone starts cheering and clapping.”

So there will be no suit and tie for Frazar. He will turn 40 next month and is a full-fledged Tour player through 2013. He finished T-22nd at the Open then sat down with Allison to make a schedule for the rest of the year.

The Frazar’s are quietly devout, they don’t talk about their religion much but it is an important part of their lives.

“For a long time, Allison would pray to God to give me the peace to let me win,” Frazar said. “Then she prayed that hard work would be rewarded. More recently she just asked him to please show me clearly what I’m supposed to do, whether I’m supposed to play golf or not play golf.

“I think the message I got is pretty clear. If it had been the other way, I would have been at peace, too. But it wasn’t. I’m right where I’m supposed to be.'

Which, for the foreseeable future, is on the golf course.