Hawk's Nest: Half empty, half full for Tiger and Rory? 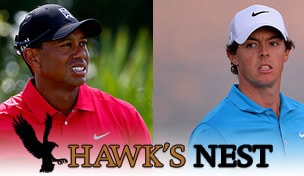 Getty Images
SCOTTSDALE, AZ - FEBRUARY 04: Zach Johnson hits out of the bunker on the 10th hole during the first round of the Waste Management Phoenix Open at TPC Scottsdale on February 4, 2016 in Scottsdale, Arizona. (Photo by Scott Halleran/Getty Images)  -

From career-threatening chasms to pesky muscle spasms, few two-word sentences reverberate across golf’s landscape to more widespread interpretation. Just when some were getting comfortable with the idea that Eldrick T. Woods might start winning majors again, he misses a Saturday cut at Torrey Pines, a course he owns, and then walks off PGA National with five holes to play.

Not so suddenly, the “T” stands for trauma. But before we go overboard with Woods’ latest injury-related withdraw, it stands to reason that he’ll show up at Doral this week. Sunday marked the fourth time in less than four years that Red Shirt has pulled out of a tournament with health issues. Only once has he failed to make his next scheduled start.

Inconclusive data, mind you, but I don’t doubt for a minute that Woods’ back is bothering him. The weight of expectations hasn’t gotten any lighter. The burden of outrageous competitive standards has always been a 500-pound knapsack on the climb up Mount Nicklaus, and the man isn’t getting any younger.

So a week that began with Tiger griping about slow greens ended with him 5 over through 13 holes. A final round that began with him on the fringe of contention quickly capsized with a double bogey at the par-5 third. And a man who once bristled over “slump talk” has just one top-10 finish in the last seven months.

He’s made just six starts over that stretch, of course – less than one tournament per month on a tour where the seasons never really end. Less production or more inconclusive data? Half empty or half full? All I know is, that glass of water can break pretty easily.

LAST YEAR, IT was a toothache. This year? Heartbreak. Somewhere between quitting on the 2013 Honda Classic after 26 ½ holes and losing the same tournament in a playoff Sunday evening, Rory McIlroy repaired his golf swing, bought an engagement ring and figured out the fame thing.

When you win two major titles by eight shots apiece before your 24th birthday, acting like a kid is no longer an option. And as much as we beat on the Irish Lad for looking nothing like one of the world’s best players in ’13, it makes sense to cut him some slack for crumbling down the stretch at the Honda.

McIlraunch threw up on himself with a four-stroke lead after 54 holes at the 2011 Masters, and then rebounded to crush the field at the very next major. He played very poorly at the U.S. and British Opens the following summer, then dusted himself off and won three of his last five starts, including the PGA Championship.

The fact that McIlroy gave NBC a few minutes of his time after losing to Russell Henley, and then met with the media for a full-length interview, says something about his maturity and ability to deal with failure. A lot of top-tier players aren’t willing to discuss such matters so soon afterward, and the PGA Tour isn’t all that persistent when it comes to pressing the issue with agitated runner-ups.

“I counted myself very fortunate just to be in the playoff,” McIlrighteous admitted. “I didn’t play well enough at all to deserve to win this tournament. I wasn’t in control of my golf ball coming down the stretch.”

Those are the type of money quotes that make a golf writer’s job a lot easier. More importantly, it’s hard to imagine a player extracting more value from a blown final-round lead than McIlroy did Sunday. He looked wobbly all afternoon, but because almost everyone else was moving backwards, he held at share of the lead until making a mess on the 16th.

His second shot into the par-5 closer was one of the best fairway woods you’ll ever see, but McIlroy missed a 12-footer to win after Henley gave him a read. Some will see a guy who needed a win and let a big one get away. I see a guy who drove it wonderfully all week, fought his nerves on Sunday and will be armed and dangerous the next time a similar situation arises.

MY EARLY MASTERS line, although keep in mind, my wagering window does not open until April 1. No credit cards accepted.

• McIlroy (12-1): He’s going to win this tournament three times before all is said and done. Next month would be a good time to start. Swinging the long clubs with an awesome blend of fluidity and speed.

• Henrik Stenson (16-1): T-17 is his best finish in seven Masters starts, but this is a very different guy now. Hits it a mile high. Distance has never been an issue.

• Phil Mickelson (17-1): He’ll be ready, I assure you. Reserves highest level of focus for second week in April. Twelve top-10s at Augusta National in the last 15 years.

• Woods: (20-1): Hasn’t done anything to suggest nine-year Masters drought is about to end. Short game still turns 73s into 69s, but the putts haven’t been falling in Georgia for quite a while.

• Bubba Watson (22-1): Victory at Riviera puts him back on the map. A streaky, high-strung player who could use another high finish in Florida. Bubba reminds us – we’re all day-to-day in this world.

LOST AMID THE commotion of that better-late-than-never West Coast swing, U.S. Ryder Cup captain Tom Watson named Raymond Floyd as one of his assistants for the big matches this September in Scotland. Floyd joins Andy North on the skipper’s staff, and if the choice of Watson himself was a notable diversion from the formula used by the PGA of America to select its captains, neither of Watson’s appointments was exactly conventional.

Floyd is 71 years old. North turns 64 next week. And though North is a member of ESPN’s coverage team at three of the four majors, neither guy is an active Tour pro, as is usually the case with most assistants. It would not annoy me if Watson added someone like Jim Furyk to his staff – someone who still competes against the big boys on a regular basis.

At this point, I’d like to totally contradict myself by saying the Ryder Cup captaincy is one of the most overrated elements in golf. I loved the Watson pick for cosmetic reasons – outside-the-box thinking, a fresh start, etc. – but will it really make a difference at Gleneagles? We’ll see.

I suppose this old-school administration will simplify things, which could reduce the pressure on the players, but I’ve talked to a bunch of U.S. Ryder Cuppers over the years, and when I’ve asked them to name their favorite captain, even off the record, no one answers. Every skipper did a great job, they will tell you. Not one of them did a single thing wrong.

FINALLY, A ROBUST shout-out to the good folks who run the Honda Classic. For all the once-prominent tournaments that now struggle to draw premium fields and move the needle, this PGA Tour event has become the exact opposite.

Over a span of about two decades, the Honda was basically the can-miss stop on the Florida swing. It struggled through five venue changes – a couple of them pretty bad courses – while the title sponsor remained loyal to the cause. Honda has been the Tour’s corporate partner here for 32 years, displaying amazing loyalty to Camp Ponte Vedra when you consider the actual parameters of the product.

The 2007 move to PGA National, and the involvement of Jack and Barbara Nicklaus, has turned everything around, and in that respect, the Honda Classic is very unique. During the WGC/FedEx Cup era, no other Tour stop can come close to matching the Honda’s rags-to-riches profile.