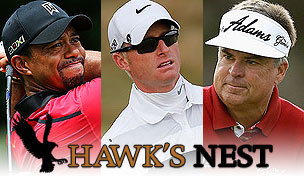 It’s always nice to see a mega-talent like Dustin Johnson win a real golf tournament, even if it is a WGC with some big names MIA or AWOL, depending on your POV. It’s not Johnson’s fault that Tiger Woods traveled 8,169 miles to China for a $3 million game of pattycake with Rory McIlroy, then couldn’t schlep it 902 miles north to Shanghai and join a decent field three days later.

Conventional wisdom tells me Tiger needed the time off to prepare for this week’s Turkish Airlines Open. I’m gonna be dead honest with you – I didn't even know Turkey had its own airline. Now it has its own European Tour event, although it should be pointed out that Turkey is one of those rare countries that is part of two continents: Europe and Asia.

I know, I know. You couldn’t care less. All anyone wants to know is, how much free money is Woods getting to show up in Antalya with a clean red shirt and a golf swing? Again, $3 million seems to be the magic number – roughly the same amount Eldrick split with McIlriches last Monday at Mission Hills.

Does the $3 million come with a complimentary tank of jet fuel from the title sponsor? It’s a long way back to Jupiter, be it the town in Florida or the planet next to Saturn, and the last thing anyone wants is a 14-time major champion leaving town unhappy. With that in mind, I suggest that a local caterer handle the clubhouse spread. You know what they say about airline food.

YOU’LL BE SADDENED to hear that Englishman Simon Dyson has withdrawn from the TAO after he was accused of cheating at the BMW Masters, which necessitated his appearing before an independent disciplinary panel to address the charge last week. Multiple published reports refer to Dyson’s illicit action as “tapping down a spike mark,” which, at least technically, wasn’t really the case.

Dyson obviously broke a rule by flattening the ground a few inches in front of his mark – the defendant himself admitted as much. As is often the case in these situations, however, things get more complicated from there. What I find particularly appalling is Dyson’s description of the infraction as an “accidental mistake,” a term he used in a statement on the matter last week.

Rarely could a pro golfer’s intent appear more obvious. Dyson’s use of the ball as a “flattening tool” is so unusual that any denial of a motive will be hard to justify and harder to believe. As a golf fan who doesn’t always believe the crime fits the punishment, I’m certainly hoping level-headed justice is served here.

WHILE PLAYING IN an inter-club match a couple weekends ago, I was asked the question a veteran golf writer hears more than any other. “Who are the nicest guys on the Tour?” one of our opponents inquired, which usually precedes a request to identify the biggest jerks. Only in safe company will I bother responding to the follow-up, but my nicest-guy answer has been the same for a decade or so.

There are more than a dozen worthy candidates, and though I may not be the world’s fairest judge of character, I didn’t get this space by being wishy-washy, either. Perry is an exceptionally kind-hearted human being without a phony nerve in his body. He is the ultimate family man, a giver and a pleaser, and though every tour pro I’ve ever met has at least a little ego, Perry is a Kentucky boy with tremendous balance and clear perspective in his soul.

Now that he’s won the 2013 Charles Schwab Cup as the best player on the Champions Tour, I feel compelled to share a few Kenny Perry stories. My favorite actually emerged from the lone dust-up we’ve had – I wrote a column for Golf World in the summer of 2008 criticizing Perry’s decision to skip the British Open and play in the John Deere Classic.

“Hawkins and those guys have said some pretty rude things about me,” Perry quipped at the Deere, which didn’t bother me because it wasn’t exactly true. Having won the Memorial and Buick Open that June, KP was the hottest golfer on the planet, and I simply thought it was a shame that he wasn’t heading over to Royal Birkdale in search of that elusive first major title.

Anyway, it wasn’t until late August at The Barclays that I finally caught up to Perry. I had tried to contact him by phone through my longtime colleague, Tim Rosaforte, but KP was on a houseboat at the time and told Rosaforte he didn’t want to talk to me. So I drove down to New Jersey not knowing what to expect. I just knew I had to do whatever it took to work things out.

There he was on the practice range, one of three or four guys hitting balls late Tuesday afternoon. Perry saw me coming, put down his club and broke into a million-dollar smile. “Ancient history,” he would call our difference of opinion, and for the next 15 minutes, we chatted like a couple of guys creeping up on our 50th birthdays.

A few years earlier, I’d flown into Nashville and driven about 45 minutes north to meet Perry at his pride and joy: Country Creek GC, a cute little public track in his hometown of Franklin, Ky. I found it rather funny that it was snowing when I landed in Tennessee, knowing how much Perry dislikes cold weather, and made it a point to let him know about it when I arrived in Franklin.

We spent the day filling microcassettes and hanging out with 14-handicaps in denim overalls. When you write a lengthy feature on someone, you don’t always like them as much as when you started the project. When I turned in the Kenny Perry piece, I liked him about 10 times more.

Fast-forward to the 2009 Masters, where Perry bogeyed the final two holes and lost in a playoff to Angel Cabrera. As the twilight turned to darkness, there was KP explaining himself in front of maybe 15 television cameras just outside the Augusta National media center. Both of his daughters, who were 20 and 24 at the time, were crying, as was Perry’s daughter in-law.

Justin Perry, Kenny’s lone son, had this blank, faraway look on his face that I’ll never forget, listening to his dad beat himself up and second-guess crucial decisions down the stretch. The whole scene was agonizing to watch but impossible to walk away from – a painful family portrait no journalist could adequately capture with syllables.

Maybe I would have felt differently if it had been somebody else, but it wasn’t. Nice guys hardly ever finish last. Sometimes, they finish second and shatter the hearts of all the good people around them.