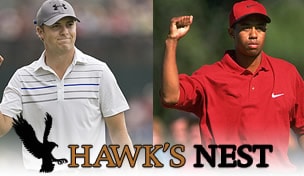 Nothing inspires a veteran golf writer more than the opportunity to pick on something done ostensibly for commercial purposes. The FedEx Cup playoffs, for instance. Really good idea, rather suspect execution. Letting 125 guys into your postseason is basically asking for a visit from the fire marshal.

If winning the Valero Texas Open gets you 500 points and winning the Masters gets you 600, why is each playoff tilt four times more important than the Masters? Ten million smackers will buy you a lot of things, but a green jacket isn’t one of them. Wouldn’t the back-weighted format make more sense with a certain amount of exclusivity, if you had to work hard to get into it?

There was a period Sunday when Henrik Stenson’s once-massive lead had become a bit tenuous, and my imagination began running wild. Let’s say Jordan Spieth, a longshot to win the overall title, passes Stenson down the stretch and wins the Tour Championship, thereby redirecting the $10 million to Tiger Woods. Is that suspenseful, or is that just plain silly?

Now if there’s such a thing on earth as a guy who doesn’t need a check with seven zeros, it’s Eldrick Almighty Dollar, but in the context of the current system, he wouldn’t have earned it, either. My question is, Does Woods give Spieth $2 million for hijacking the Brinks truck? It’s not like the kid has been living on minimum wage himself the last couple of months.

Does Tiger even send him a thank-you card? Thank goodness Stenson didn’t develop a more serious hitch in his giddy-up. An angry fire marshal is one thing. An eight-figure heist in broad daylight? You’re gonna need Columbo for that.

THE AMAZING THING about Spieth’s rookie season has been the consistency – first-year players simply don’t perform at such a high level on a regular basis. In 2011, for instance, Keegan Bradley won twice but had just two other top-10s, both at weak-field events. Ben Curtis’ stunning British Open victory in 2003 was his only top-10 all year.

You could make a case that Spieth is the PGA Tour’s most impactful “real rookie” since Tiger Woods (1996). Not only did the kid secure his spot in the big leagues less than a year after turning pro, he began prospering almost immediately. Spieth’s nine top-10s tie him for the most on the Tour. No rookie has collected more since the ROY award was founded in 1990.

If he doesn’t jar that bunker shot on the 72nd hole at the John Deere Classic, things might have been different, but greatness tends to bring its own launch point. You may recall that U.S. Presidents Cup captain Fred Couples left Bradley off the 2011 team, which generated a modest amount of criticism but certainly wouldn’t qualify as the most controversial snub in golf history.

As inconsistent as Bradley was in ’11, he did become the fifth player to claim a major title and ROY honors in his first year as a Tour member. I qualify it that way because two of those guys – Ernie Els and Todd Hamilton – weren’t really rookies. Both had won numerous tournaments on top-level tours overseas. Calling Els a rookie in 1994 is like calling Stu Sutcliffe a Beatle.

And so … I’ve omitted those guys from my list of the best rookie seasons since 1990. Not a ton of realistic candidates, but man, putting them in a fair order was all I could handle.

• 6. Sean O’Hair (2005). We can talk about the importance of winning majors until the sun comes up, but most rookies don’t make it into those fields, which is why their body of work overrides one big week. O’Hair missed one cut in his last 24 starts. He finished 18th on the money list, won the John Deere and had a solo second at the Byron Nelson when it was still a strong event. He might be slow to hit a golf shot, but few careers have gotten off to a faster start.

• 5. Rory McIlroy (2010). You want to hear a good joke? McIlrookie was beaten out for ’10 ROY honors by Rickie Fowler, who had seven top-10s but went winless while averaging $102,039 per start. The Irish Lad conquered a premium field in Charlotte for his first Tour victory, finished third at each of the year’s final two majors and averaged $159,642. No wonder McIlrobbed didn’t retain his Tour membership in 2011. He spent the year looking for justice.

• 4. Woods (1996). The guy won twice in eight starts and made it to the Tour Championship two months after turning pro, which is one way of solidifying your status for the upcoming year. If you add his first eight tournaments in ’97 to give him a full rookie season, Tiger ends up with five wins, including the Masters by 12. Those first three victories came against Davis Love III (Las Vegas), Payne Stewart (Disney) and Tom Lehman (La Costa). I’ll admit, it looked like the guy had a future.

• 3. Spieth (2013). OK, so maybe the body of work isn’t all it’s cracked up to be. Spieth had a terrific maiden voyage, but winning the John Deere isn’t quite the same as hoisting the Wannamaker. He didn’t get into the Masters or Players Championship and skipped the only WGC for which he was eligible (Firestone), which looks like a good move now. At the end of the day, however, winning big tournaments is what matters most. It’s only a matter of time, but it hasn’t happened yet.

• 2. John Daly (1991). His triumph at the PGA was the Win Heard ’Round the World, but Big John didn’t exactly take the rest of the year off. A solo third at the Tour Championship vaulted him to 18th on the final money list. He piled up 11 top-25s, many of them in lesser events, but 22 years ago, the season lasted forever and there were no WGCs or FedEx Cup playoff events. Spieth and Bradley simply had more opportunity.

• 1. Bradley (2011). It hardly matters that both his rookie wins came gift-wrapped – by Ryan Palmer at the Nelson and Jason Dufner at the PGA. Bradley also missed 10 cuts, but a bunch of weekends off didn’t prevent him from finishing 13th in earnings and fifth in the FedEx Cup standings. The guy got stronger as the year went longer, which makes him kind of like Spieth with better trophies.

THE REGULAR SEASON does matter. No, really, it does. More than a mere tuneup for the big FedEx Cup finale, the playoffs don’t give January to August nearly as much love as I do. Stenson entered the year 53rd in the world ranking – a vast improvement for a guy who began 2012 ranked 207th.

Here’s how the top 10 in the world ranking looked nine months ago, plus a brief synopsis of their season and a grade for their performance in 2013:

• 1. McIlroy – The girlfriend. The golf clubs. The gruesome double bogeys. When Martin Kaymer falls from the No. 1 spot with a deafening thud, nobody hears a sound, but McIlroy’s struggles have become one of the year’s biggest stories. Still just a kid? In the here and now, we’re talking David Duval more than the Dude in the Red Shirt. (Grade: D-).

• 2. Luke Donald – Yes, he was the No. 2 player in the world on New Year’s Eve, back when he had the same number of Tour victories (five) as he has now. Only at Harbour Town did Donald come close to winning. Another lost year at the majors led him to change swing coaches – Chuck Cook got the job after Sean Foley turned it down. Short hitters need to hit fairways. Luke doesn’t. (Grade: C-).

• 3. Woods – You’ve gotta love a guy who says majors mean everything, at least until he stops winning them. Hey, five Ws isn’t chopped liver. Woods even rolled the calendar back to 2000 a few times, if only briefly, and drove the ball better than he has in years. Is it just me, or did he look just a bit uninterested during the playoffs? (Grade: B).

• 4. Justin Rose – Winning a U.S. Open fixes everything, although Rose hasn’t needed much fixing in recent years. He’ll never be a prolific winner, just a very tough customer on difficult courses, which is where most of the big trophies are awarded. Has jumped from 99th to 80th to 30th in driving distance since 2011. In his world, every inch counts. (Grade: B).

• 5. Adam Scott – He might be the only guy in golf history who’s had three or four breakthrough seasons, testimony to his immense ability and habit of not sustaining his pursuit of greatness. Caddie Steve Williams’ influence seems to have made Scott tougher, but throwing away a British Open will thicken your resolve, too. Won the Masters and Barclays, in the hunt at the British and PGA, didn’t miss a cut all year. Great Scott? Maybe. (Grade: A).

• 6. Louis Oosthuizen – Here’s a guy I can’t quite figure out. If I swung the club like Oostie, I’d play 54 holes a day, but he seems more interested in riding tractors than playing tournament golf. Injured for much of the year, basically did nothing over here. He’s expected to show up for the Presidents Cup, and to be perfectly honest, I wouldn’t be shocked if Oosthuizen went 5-0. (Grade: D).

• 7. Lee Westwood – For all the attention, for all the expectations, Westwood still has just two career victories in 180 U.S. starts. A fairly typical year in that he didn’t miss a cut but really didn’t threaten on Sunday – his 54-hole lead at the British Open evaporated well before Phil Mickelson made his heroic charge. Still time to ditch the monkey, but when you chip and putt like he does at crunch time, that chimp can hang on your back forever. (Grade: C-).

• 8. Brandt Snedeker – Another Masters slipped through his hands, but 2013 was another big year for Sneds. Two more victories and nine top-10s, tied for most on Tour, made him the first FedEx Cup champion to get back to East Lake. Golf swing has evolved to the point where he can compete at the highest level in any environment. Has joined Stricker and Westwood on short list of best players without a major title. It’s a compliment unless you stay on the list forever. (Grade: A-).

• 9. Bubba Watson – Just when you think Bubba’s ready for the big time, he goes winless the entire year, barely factors on the weekend and blows the one good chance he had. Simply has to putt better if he wants to take advantage of all that length and creativity. One top-10 at a full-field stroke-play event in 2013? He’s better than that. A lot better. (Grade: D).

• 10. Jason Dufner – Was having the same kind of year as Watson before roaring to life in the summer. The PGA Championship victory reminded us how efficient Dufner can be from Tee to Green – and how scary he can be over those 4-footers. Bottom line? He had a good year. When a man goes seven full seasons without winning a tournament, then picks off two Ws and follows it up with a major he’d blown two years earlier, the glass is more than half-full. (Grade: B+).