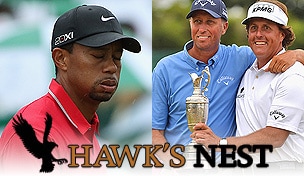 Getty Images
Jordan Spieth of the USA and Steve Stricker talk on the 7th hole during the Day Two Foursome Matches at the Muirfield Village Golf Club on October 4, 2013 in Dublin, Ohio. (Photo by Andy Lyons/Getty Images)  -

With all due respect to November and December, the golf season is over. Ten months is two months too many – we need a World Golf Championship in China the way I need another chocolate-chip cookie. Not to sound gruff, but enough is enough.

On the main drag about a half-mile from my house, another giant financial institution is building another stadium-sized bank that looks rather snazzy, but nobody will actually come in and do business in it. A lot of people move their money on the Internet or through an ATM, so these Taj Mahals would seem to be an exercise in excess, although I’m sure some guy in a tie with a $2.7 million annual bonus would tell me otherwise.

Same thing goes for pro golf. Nothing can happen between now and the end of the year that will qualify for my Top 10 Storylines of 2013, so here it is. And if I’m wrong? No problem. I’ve got two months to redeem myself and a massive Citibank right up the street.

10. The fried-chicken fracas. It took forever, but the ill will between Sergio Garcia and Tiger Woods finally ventured into full public view with a couple of messy incidents in May. Garcia blaming Woods for a bad shot he struck during the third round of The Players Championship was merely a childish reaction, almost comical in its absence of rationale.

His racially tinged comment regarding Woods two weeks later, however, was reckless and narrow-minded, rattling sensibilities in a game that can’t afford to strengthen its negative stereotypes. Neither Garcia’s intent, nor the proverbial apology, meant much here. You leave a loaded gun lying around long enough, somebody gets hurt.

9. Anchors away? More of a non-story than a headline hog, the anchored-putter ban drove countless conversations and fueled debates while not going anywhere at all. To be continued? You betcha, especially if talented young players keep winning major titles while employing a technique that will be illegal in two years.

The PGA Tour has insinuated that it will comply with the ban, but some very big questions remain open-ended. Lawsuits? Champions Tour survival? In a sense, this is a lengthy game of chicken in which everyone will hang their head out the window for a while.

8. Park Place. If Woods or any other male golfer won three consecutive majors, we’d be planning the ticker-tape parade. When Inbee Park did it in ’13, it was a case of the tree falling in the forest. Sadly, the women’s game has never fallen further from the mainstream radar, and if some have been quick to blame the Asian invasion for the LPGA’s lack of reach, perhaps the entire contingent of American players should hold a meeting. In front of a mirror.

7. Duf the Twitter Magnate. Or magnet, as golf’s social-media sensation-turned PGA champion proved to be after his inert pose in a Texas classroom launched a bizarre avalanche of attention. Personally, the whole Twitter thing turns my stomach, but my 10- and 13-year-old daughters know who Jason Dufner is, and it’s not because he hit 54 greens in regulation at Oak Hill.

Blame it on the stoner-like visage or his relative indifference to anything requiring emotion, but Dufner was as radar-friendly in ’13 as Park wasn’t. Nobody else gets famous for nearly falling asleep in front of a bunch of elementary-school kids. And if Duf wasn’t a really good player, it probably wouldn’t have lasted.

6. Antlergate. Vijay Singh’s admission of using a banned substance turned into a tangled pile of legal wires, then a lawsuit, forging an incredulous twist on a hall-of-fame career in which an unsavory past met up with a checkered present. Singh’s legacy has always formed an awkward partnership with public perception, and now, his accomplishments are framed in skepticism.

In the court of popularity, perhaps Singh had nothing to lose, but the PGA Tour did. Sometimes, the skeleton not only leaves the closet, it makes a spectacle of itself.

5. Majorless no more. Dufner was one of three top-tier players to win his first major title, but Adam Scott’s Masters victory was by far the most memorable. A sudden-death triumph over Angel Cabrera, with both guys performing so heroically down the stretch, instantly revised the style-vs.-substance quotient that had dogged Scott for years.

From handsome underachiever to first Masters champ from Australia, we’re talking about a pronounced career transformation in 2013. Scott proved consistently tough in golf’s biggest events and won again at The Barclays in late August. The sky was always the limit. There just aren’t as many dark clouds now.

4. Tiger rules. It’s easy to forget that his year began with a two-stroke penalty for an illegal drop in Abu Dhabi. Two strokes were added after the hard-luck carom off the 15th flagstick at the Masters and ensuing illegal drop, two more after his ball was deemed to have moved at the BMW. For everything said about Eldrick Almighty over the span of his brilliant career, no one had ever questioned Woods’ on-course integrity.

Now some are, perhaps as much for Tiger’s unwillingness to man up to the violations as the infractions themselves. Forever allergic to admitting guilt, Woods’ resistance was bound to leave a mark at some point. In 2013, those moments arrived as a trio. Megaphone included.

3. McIlrotten. Oh, the theories. They began arriving in bundles back in February and never let up, many of them borrowing from each other and blurring the basic difference between fact and opinion. One truth was clear: Rory McIlroy wasn’t close to as good a golfer in 2013 as he’d been the year before. Or the year before that. You take it from there. The new clubs. The girlfriend. The fame. The fortune. All of the above? Look out, below.

The Irish Lad’s failures remind us that good golf is hard – and great golf allows very little room for childish nonsense. In the broadest of terms, his inability to win a tournament in ’13 can be traced to a lack of maturity and sound guidance. Good kids still do a lot of dumb things, but it’s nothing two weeks on a deserted island with a fishing pole and a friendly dog can’t fix.

A fifth major title and 42nd career win overall only secured Philly Mick’s standing as one of the 15 greatest golfers ever, but this was a landmark triumph, an exclamation point on a dossier defined by its abundance of punctuation. His closing 66 was the performance of the year, a doubt-killing display of greatness in the clutch. Any questions? Didn’t think so.

1. The five-year itch. Yes, he won that 2008 U.S. Open on a battered leg, but everything since has jarred his once-unflappable competitive psyche, leaving Eldrick T. Youknowwho stuck in neutral 73.7 percent into the climb to the top of Mount Nicklaus. In 2013, each of the majors produced a slightly varied set of flaws. As for the big picture, Woods’ ability to get it done on the weekend isn’t what it once was – he hasn’t broken 70 on a Saturday or Sunday since the 2011 Masters.

Fair or not, greatness comes with its own set of expectations, and as Tiger approaches his 38th birthday, those expectations come with a burden that can’t be measured or held accountable on a shot-by-shot basis. Only Woods knows if the pressure has gotten to him, and he’s not about to tell us if it is. When you win 14 majors in 11 years, you’re the ultimate gamer who can make it look so easy. When you go five-plus years without winning one, you’re just trying too damn hard.