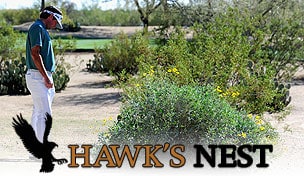 Burrowing animals are a golfer’s best friend. When wedging out won’t work, when a crooked drive leaves you barely alive, you do what Bubba Watson did on the 13th hole last Saturday. You blame it on the iguanas. You find a friendly face and search for playable space.

I was both amused and outraged by the free drop given to Watson by tournament official Jon Brendle, who is one of the nicest guys you will ever meet, as are most of the lawmen who work for the PGA Tour. Bubba had blasted his ball into a desert bush, took a few minutes to assess the damage, then called on Brendle to decide if he could take unpenalized relief.

Permission granted. However slanted. “Being that he is left-handed and could advance the ball, the club path was going to strike the burrowing animal hole [at impact],” Brendle would explain. “Therefore, he was entitled to a drop.”

Now I’m confused. Hadn’t Phil Mickelson, another lefty, cost himself a victory in Qatar a week earlier by trying to hit a shot right-handed from a very similar lie? If the ground is affected at the point of contact, what difference does it make whether you’re left- or right-handed? Can’t every golfer just walk to the other side of the ball and ask for relief on the same basis?

Maybe they don’t have lizards in Qatar. I’ll be honest: I haven’t been there lately.

Because the Tour’s rules officials are such fine people, they tend to lean in favor of the Tour pro on such matters. Men such as Brendle, Mark Russell and Slugger White seem a lot more forgiving than say, European Tour chief referee John Paramor, whose interpretation of the law isn’t quite as loose.

We’re talking about a guy who penalized 14-year-old Guan Tianlang two strokes for slow play at last year’s Masters. Brendle would have walked the kid over to a concession stand and bought him a sandwich.

With that in mind, I present my five favorite questionable verdicts in recent years (hot sauce not included):

• Ernie Els, 2004 Masters. After driving his ball deep into the left woods on the 11th hole in the third round, Els was denied relief from a pile of fallen tree limbs by two rules officials. Tournament committee chairman Will Nicholson reversed the decision, however, which helped lead to one of the greatest finishes in Masters history. Who says golf would be better off without lenient zebras?

• Vijay Singh, 2000 Masters. Same hole, four years earlier. Singh’s second shot found the pond left of the green, but instead of hitting his fourth from a designated drop area behind the water, as the yellow line would have indicated, he played it from a much easier spot - adjacent to the lake, just a few steps off the putting surface. A par chip, in essence, led to a routine bogey and Singh’s second major title.

• David Duval, 2001 U.S. Open. A week the USGA would like to forget, as the ninth and 18th greens were intentionally played at slower speeds in response to agricultural issues, but it was a spectator crosswalk at the ninth that felled Duval in the third round. His perfect drive came to rest on the muddy path, which was trampled in footprints, but the official working his twosome denied him relief.

It was by far the angriest I’ve ever seen Duval, who proceeded to chunk a wedge, then kick the soggy divot and slam his club into the muck. He would bogey the hole and fade from contention.

• Bubba Watson, 2014 Phoenix Open. I’m pondering the idea of dumping my gap wedge and carrying a burrowing animal as a 14th club. Maybe Bubba was just getting a head start on his observance of Groundhog Day.

• Tiger Woods, 2006 WGC-Bridgestone Invitational. The man was given free relief after hitting his ball on the Firestone clubhouse roof! Other than winning four consecutive major titles and making 17,000,000 consecutive cuts, I would consider this among Woods’ greatest accomplishments. Paramor? He might’ve had him arrested for breaking and entering.

NOT TO HARP on a theme, but the West Coast swing continues to leak oil. In all likelihood, it appears Woods, Mickelson and Adam Scott will skip the WGC-Accenture Match Play gathering later this month. We’re talking about three of the top four players in the world ranking, and though the PGA Tour would never admit it, I’m sure a few doors are being slammed in Camp Ponte Vedra.

This is Accenture’s final year as the tournament’s corporate host, and it’s a significant loss - the management-consulting firm was the only original title sponsor to remain since the WGC series began in 1999. The bright side? This event can finally get fixed. It needs new dates and a far more compatible venue than Dove Mountain, which simply hasn’t worked for a number of reasons.

By moving the Match Play to a warm-weather month, the Tour would find itself with a much greater range of potential sites and sponsors. Besides, having two WGCs (Match Play and Doral) in a three-week stretch really doesn’t make sense. Not that the Tour really cares about enforcing the brand from a competitive standpoint, but if you’re gonna ask some company for $10 million to put its name on the shingle, you must deliver a top-level product.

What makes sense? You approach a golf-friendly partner such as RBC, which currently sponsors the Canadian Open, the Hilton Head stop and eight high-profile Tour pros, and you work something out with priority given to the long-term picture. Both of those events are played the week after a major, meaning they have lousy dates, so you’d have to do some schedule juggling. No big deal there.

A better scenario would involve turning the Match Play into the regular-season finale - the fifth and final FedEx Cup playoff event - with a field of 12 and Pebble Beach as the locale, which would lead to a prime-time TV window. It’s a plea I’ve been making for years, but since Accenture held exclusive rights to the match-play format, it wasn’t something that could be done without a ton of hand-wringing.

Maybe it’s still ridiculous, but Accenture’s departure makes the possibility a lot less far-fetched. Now more than ever, the Tour must face the fact that it competes with the European Tour (and indirectly, the four majors) for star-power presence. As Dove Mountain has proven, the overall product needs to consistently evolve.

ORIGINAL IDEAS IN golf journalism are hard to come by, but my friends at Golf World certainly came up with one when they ranked the game’s 100 best players since 1980. This wasn’t some Rolling Stone-like list compiled off expert opinions, but a ranking based on oodles of data, and the results packed more than enough punch to pique plenty of opinion:

Norman is the obvious surprise here. It’s easy to forget how long he reigned as one of the game’s best players despite winning just two majors; Duval is the only member of the top 10 with fewer. No question, the Shark benefited greatly by launching his career right around the starting point of Golf World’s data window, meaning all of his best golf was included in the process.

Nicklaus and Watson were victimized by the opposite factor. That both ranked comfortably inside the top 10 speaks volumes about their greatness. Woods had nine of the 11 best single-season performances during the 34-year stretch. Watson (1980) and Singh (2004) had the other two.

“Our goal was to create a ranking based on more than just a player’s record in major championships, which we feel ignores too much relevant golf,” says Golf World editor Jaime Diaz. “More than anything, we wanted to determine week-to-week performance over a player’s best years and reward accordingly.”

Why start with 1980? That’s when the Tour greatly expanded its statistical database. Nicklaus loses about 75 percent of his premium golf, which is a shame, but every such project must have a chronological beginning without regard to a particular player’s career parameters.

I don’t think Jack would have caught Tiger if the Tour statisticians had gotten busy 20 years earlier. If this article doesn’t convince you Woods is the best golfer of all time, nothing will. “Our metrics specifically defined his greatness and gave it even greater dimension,” Diaz adds. “Basically, the closer you look at Tiger’s performance, the better it gets.”

THAT SAID, HE looked so inferior in Dubai. Playing with McIlroy (and eventual winner Stephen Gallacher) in the first two rounds, Woods struggled to hit fairways while setting up significantly left of the target. His big-cut drives often left him 20 to 30 yards behind McIlroy, whose enormous power belies the fact that he stands 5-10 and weighs 160 pounds after a huge dinner.

Tiger spent most of those two rounds hitting after the Irish Lad. McIlrip’s body coil and lag would produce frightening club speed; Tiger would stick his peg in the ground and move his driver to the ball at nowhere near the same pace.

After seeing this repeatedly, I began thinking of comments made last week by Woods’ former swing coach, Hank Haney. Has Red Shirt gotten too musclebound? Hank and I revisited the subject a few days later.

“He said his doctor told him in 2008 [during knee surgery] that, with his bone structure, he needed to weigh 165 pounds to take the pressure off his knee and his body, Haney said. “He has to weigh 200 now.”

Maybe he’s trying to hit more balls on the clubhouse roof. Those free drops won’t hurt you one bit.