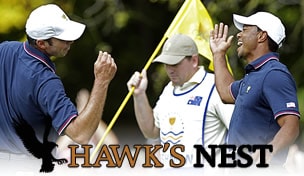 Getty Images
Out in the woods, Rick Cochran allows a Big Break Greenbrier cameraman to take a picture.  -

Not to hit you with a deluge of breaking news or anything, but it does rain fairly often in central Ohio. About 38 percent of all days on the calendar include some form of precipitation, although October is supposed to be the second-driest month of the year in Columbus – an average of 2.6 inches.

Insert your own punch line here.

So the Presidents Cup was victimized by a downpour of soggy luck. Just imagine, however, if Jack Nicklaus had been born and raised in Miami, where they get 6.3 inches of rain in October. Or Houston (5.7). Or Portland, where it really doesn’t matter which month you’re talking about. Nicklaus might not have even played golf if he’d grown up in Buffalo, which has more wet days (167) than any big city in the continental United States.

He might have decided to become a pharmacist if he’d come from New Orleans, which ranks atop America’s precipitation leaderboard at 62.7 inches annually. Instead, Jack is a Buckeye. He built Muirfield Village on a stunning piece of property where 30,000 people show up rain or shine to watch a contrived match-play event with less suspense than an episode of “Hollywood Squares.”

I’d take my hat off to the great golf fans in Columbus, but it’s raining here, too.

BACK IN THE Stone Age, circa 1998, many knowledgeable observers wondered whether Tiger Woods had enough long-term interest to participate in team-match gatherings every year. Woods’ Ryder Cup debut at Valderrama a year earlier had been neither stellar nor enjoyable. The PGA of America denied his father, Earl, the same access given to the players’ wives, and Tiger, who wasn’t married, is said to have resented the snub.

He won just one of his five matches and was drubbed by Costantino Rocca in singles. The southern tip of Spain is renowned for its perfect weather, but it rained all week there, too, which didn’t go over swimmingly for a 21-year-old kid from a Los Angeles suburb. More than anything, young Eldrick seemed indifferent about the whole concept of playing for a flag – and for the wrong kind of free.

The kid wanted to golf his own ball, wanted to keep score the normal way, and he’d gotten very used to receiving a big check Sunday evening. The Presidents Cup? Seriously? When the third edition of the Prez was held in Australia 14 months after Valderrama, Tiger clearly wasn’t into it.

Once the U.S. had been trashed by the Internationals in what remains America’s only Presidents Cup loss, the question wasn’t so much if Tiger would continue showing up, but when he’d stop. Then came 1999 – a Ryder Cup week dominated early by a flap involving several U.S. players who wanted at least some control over the event’s massive revenue.

Woods was convicted by the public on the grounds of guilt by association. Probation was granted after the Yanks staged the miracle comeback at Brookline, but of all the personality traits native to the Dude in the Red Shirt, here’s one of the essentials: you may forgive, but Tiger doesn’t forget.

Those days seemed like ancient history at Muirfield Village. Woods played with more passion than we’ve ever seen at a Presidents Cup, which he has never missed. His partnership with Matt Kuchar was a considerable success, and he had just enough to squeeze out the clinching point over pesky Richard Sterne on Sunday.

The Kuchar dynamic provided an interesting twist in the long-running drama tentatively entitled Tiger & Somebody Else. As was the case with Jim Furyk, then Steve Stricker, Kuchar’s collaboration with Woods produced immediate results. All three sidekicks are known to be outstanding putters, an overt suggestion as to what Tiger truly values in the team-match format.

Lots of guys hit it a mile. That and four bucks will buy you a cup of coffee nowadays. One thing Stricker and Kuchar have in common is that both rebuilt their careers after skidding into the abyss – two of the most impressive revivals in golf’s modern era. And though Furyk has been a hallmark of consistency, he is also the consummate grinder. Nobody expected him to be so good for so long coming out of college.

Beyond those successful partnerships, two additional factors strengthened Tiger’s zest for the team-match environment. The first occurred in 2007 at Nicklaus’ final Presidents Cup as U.S. captain, when the team stayed at a hotel in downtown Montreal, which necessitated a 30-minute bus ride to the venue. That year Woody Austin lost his balance and fell into a lake during the Friday fourballs.

A half-hour commute to work is extremely rare for today’s top-tier players, much less an entire squad of them, but those lengthy journeys bonded the American side like never before. Austin served as the equivalent of a class clown on the bus. Phil Mickelson played the role of chief needler, and the laughs on the drives to and from Royal Montreal were non-stop.

It didn’t hurt that the Yanks crushed the Internationals. Woods and Mickelson found some common ground that week, acting as unofficial team leaders, and if the two will never be best buddies, their relationship made immense progress in Canada.

The second stage of Tiger ‘s team growth came when Fred Couples assumed the Prez Cup captaincy in 2009. Woods’ fondness for Couples is no secret. He was his favorite player as a kid and has always appreciated Freddie’s style and popularity. For years, Couples received a sponsor’s exemption to Woods’ year-end tournament, regardless of what kind of season he had.

Again, it doesn’t hurt that the U.S. has coasted to victory in all three of Couples’ terms as skipper. Maybe that success can be attributed to Freddie’s laid-back nature – or the lack of pressure at the Presidents Cup in general – but Tiger has become fully committed to an event he didn’t seem so sure about when he first turned pro.

ALL OF WHICH leads to a rather obvious question: why doesn’t Couples get a shot at the Ryder Cup captaincy? The PGA of America’s selection of Tom Watson to run the show in 2014 was a clear diversion from the long-established pattern of picking a former PGA champ in his late 40s with some productive Ryder Cup experience as a player.

Couples never won a PGA. His defining moment against the Euros might be a loss to Christy O’Connor in 1989, when he missed The Belfry’s 18th green with a 9-iron and lost a match the U.S. had to have. None of that matters a quarter-century later, however, and Watson’s appointment suggests that a new mentality has been embraced.

It’s a job with such a limited number of candidates – I don’t know how my friends in Palm Beach Gardens could look themselves in the mirror and not offer Couples the position for 2016. Generally speaking, the PGA of America, PGA Tour and USGA all yield to each other when it comes to selecting big-tournament sites and captains. This is done mostly as a courtesy, although the PGA of America has become far more aggressive than the other two when it comes to raiding someone else’s cookie jar.

The recent “acquisition” of Bethpage Black as host of the 2019 PGA Championship and 2024 Ryder Cup is a perfect example. Bethpage was an established USGA property with a pair of U.S. Opens in its recent past. Maybe the Bluecoats weren’t all that interested in going back there, or maybe the PGA of America came roaring in with a better offer.

Regardless, last month’s announcement was another assertive move by an organization that has fought hard for respect among its governing brethren. It’s time for Palm Beach Gardens to give Freddie a call.

I’M GONNA TRY my best to wrap my arms around the Tour’s new wraparound season, which starts Thursday with the Frys.com Open in northern California, but I’ve got to admit, I’ve got my doubts. I don’t think pro golf has enough mainstream firepower to substantiate an 11-month schedule – it wasn’t all that long ago when Camp Ponte Vedra was talking about tightening things up.

Hey, more golf tournaments that count means more business for myself and my primary employer, but the pragmatic side of me fails to see the point. I fully realize the Tour is a revenue-driven enterprise whose primary mission is to serve its entire constituency – every card-carrying PGA Tour member – but too much opportunity for the players translates to a diluted product.

A friend of mine at the Tour recently made one factor pretty clear: the title sponsors of the Fall Series events weren’t going to keep paying $5 or $6 million to host tournaments that didn’t count. They wanted to be included in the FedEx Cup derby, which might strengthen their fields, but I don’t see that happening.

I don’t see Woods or Adam Scott showing up in Las Vegas because they’re worried about falling too far behind in the FedEx Cup standings. I don’t see Mickelson hustling off to Sea Island because he owes a debt of gratitude to the Tour. Meanwhile, the Tour’s bloated middle class gets richer and richer, which poses a potential threat to the game’s competitive credibility.

This fall also marks the debut of the HSBC Champions as an official World Golf Championship, which sort of, kind of makes it the centerpiece of this scheduling addendum. Do we really need a WGC in China when we don’t have one in Europe, Australia or South Africa? Literally, what kind of world is that?