Hype is for Fools 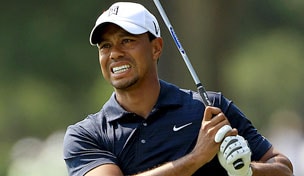 Tiger Woods withdraws after nine holes (42 strokes) at The Players Championship with “multiple leg injuries,” which makes it sound like the guy was in a motorcycle accident.

After telling us he’s having trouble walking, Woods bounds up a staircase two steps at a time and climbs into his white Mercedes, another comeback aborted, another trail of questions pouring from the exhaust pipe.

A lot of people, many of them avid golf fans, don’t like it when Tiger’s tribulations trump the other storylines, especially at big tournaments. To those who interpret the attention devoted to Woods as a lack of respect for the rest of the field, welcome to the downside of dominance: a three-Excedrin hangover on the back end of the Tiger Dynasty. You may care that K.J. Choi beat David Toms in a playoff, but a majority of America doesn’t, and for the next two or three weeks, Woods’ U.S. Open status will serve as the only subject matter that matters.

We’re talking about a man who might have finalized the demise of his marriage by returning to competitive golf at the 2010 Masters. Woods had told us on Feb. 19 that he was taking an extended absence from the game, then skipped a grand total of three tournaments.

My point? Eldrick Unmighty knows he can’t scale Mount Nicklaus unless he plays in the major championships, especially those he has won on one leg. The Tiger of 2008 might bear little resemblance to the 2011 version, but I’m sure Woods himself thinks he’s a lot closer to regaining his form than his play in recent months would suggest.

If he skips Congressional, we’d have to consider him seriously injured, which is a much worse scenario than if he simply decided last Thursday that a front-nine 42 is six or seven more strokes than his pride can handle. It’s worth noting that Woods was never a big fan of TPC Sawgrass when he was healthy. Congressional, even after the USGA’s heavy-handed makeover, is much more suited to his style – a venue that hosted Tiger’s AT&T National, which Woods won in 2009.

So he’s a story when he plays and a story when he doesn’t, which isn’t going to change anytime soon, in a large part because nobody has come close to knocking Tiger off center stage. Graeme McDowell held the third-round lead at The Players, leaving him just 18 holes short of superstardom. He responded by shooting a 79. Luke Donald put himself in excellent position to claim the top spot in the world rankings, and though he spent the entire weekend near the top of the leaderboard, he ultimately failed to mount a serious charge.

Nick Watney had a share of the lead on the fourth tee, then played the final 11 holes in 2 over to finish T-4. Choi and Toms found themselves largely unopposed down the stretch, as the nine players who finished immediately behind them combined for just one birdie on the last two holes – Hunter Mahan made a 2 on the Island Green.

In this latest installment of Life Without Tiger, we seem desperately eager to christen new stars, but most of the shining is done on a weekly basis.

Parity rules. Hype is for fools. Tiger Woods spent the better part of 13 years remodeling the game’s competitive landscape, and now, for better or worse, we barely recognize the terrain.