The keys to Tiger's stretch of dominance 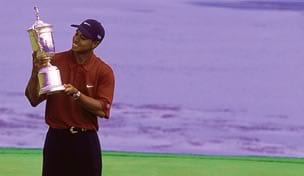 Back when he ruled the earth with a steel shaft (in his driver) and a putter that usually listened, Tiger Woods was a frequent participant on the PGA Tour’s West Coast swing. He played in five of the year’s first eight events in 2000, kicking off his miracle season with ultra-dramatic victories at Kapalua and Pebble Beach. By 2006, however, both events had been removed from Woods’ schedule, as had the Tour stops in Phoenix and Los Angeles.

Looking at the exodus from a distance, it’s justifiable to wonder why a guy who was born and raised in southern California would drop all those tournaments, but there were extenuating circumstances. The Tour schedule itself changed to make room for the FedEx Cup playoffs in late summer – Woods began playing more in August and September. He also added events in Charlotte and Washington, D.C.

Injuries and personal issues have affected Tiger’s competitive frequency in recent years, but from a career high of 21 starts in 1999, he hasn’t played in more than 17 when fully healthy since the FedEx Cup structure was implemented in 2007. Among the tournaments he dumped, Pebble always seemed the most puzzling, which makes Woods’ return to this week’s AT&T National Pro-Am somewhat significant.

If his 15-stroke triumph at the ’00 U.S. Open was the greatest single-week performance in golf history, Tiger’s victory on the same famed links five months earlier was equally remarkable, if not nearly as historic. Woods trailed Matt Gogel by seven strokes with seven holes to play, finished eagle-birdie-par-birdie and won by two. Run that last sentence through your department of logic a couple of times and tell me what you think.

That final round was completed on Monday because of weather – I was covering the event for Golf World, a weekly magazine that went to press later that afternoon. The usual Sunday finish was no big deal: you write 1,500 words, send your article at maybe 2 a.m. and move on after five or six hours of sleep. If the tournament leaked into the next day, however, you were dealing with a newspaper-like deadline.

They would need your piece as quickly as possible, meaning an hour or so after the final putt, so if you had any common sense, you would have 75 percent of your story written, then top it off with a few hundred words and hope you didn’t make any factual errors. I basically had my homage to Gogel entirely written before Woods went on his rampage. Not only was most of that stuff useless, I had about 90 minutes to chronicle one of the greatest comebacks ever. In any sport.

It also happened to be Woods’ sixth consecutive Tour victory, a streak that had begun the previous August. The fifth of those wins had occurred four weeks earlier in Hawaii – an unforgettable regulation-to-playoff duel with Ernie Els – so there wasn’t much concern about overstating the otherworldly nature of Tiger’s accomplishments. His ability to succeed under immense competitive duress was extraordinary, but then, we’d seen that years earlier when he’d won three consecutive U.S. Amateurs.

The fact that he did it over and over again still blows my mind, not so much as a sports fan, but as a semi-trained journalist. Twelve years after Maui and the incredible Pebble rally, I look at Woods’ stretch from the ’99 PGA Championship to his defending the PGA title in overtime against Bob May as the finest 12-month performance ever produced by a sportsman.

Greatness arrives, usually for a reason. Having been given a front-row seat to view Tiger’s invincibility at the turn of the century, I see five clear points that triggered his dominance, listed here in chronological order:

Butch and Stevie – It took Woods more than a year to tighten his swing under the tutelage of former coach Butch Harmon, but once he was able to synchronize his arms and body without any excess at the top, he consistently drove the ball in the fairway and rarely dealt with the killer miss. Harmon also was responsible for Woods’ hiring caddie Steve Williams to replace Fluff Cowan in March 1999. Six months into the partnership, Woods liked and trusted Williams to the point where every decision made on the golf course was a comfortable one.

Here comes Sergio – No question, the swift emergence of 19-year-old Garcia, who took Tiger to the wire at the ’99 PGA, forced Woods to realize that as good as he was, he had to keep working to realize any visions of superiority. David Duval had resided atop the World Ranking for five months until Woods reclaimed the top spot at Medinah, but Garcia was four years younger, every bit as marketable and perhaps just as gifted.

Brookline and Payne – A bit of a philosophical tangent here. The amazing U.S. rally at the ’99 Ryder Cup reminded Tiger that everyone loves a winner, that losers are bums, and heightened his comfort level in the team dynamic. Payne Stewart’s death a month later reminded Woods, at least subconsciously, that life can be way too short, that there are no guarantees. You make hay when there is hay to make.

The Pebble comeback – The miraculous Monday surge vaulted Woods’ confidence to an unprecedented level. No deficit was too large if you wipe out all margin for error, and for the balance of 2000, Tiger was as close to error-free as a golfer has ever gotten. This guy didn’t need a phone booth to change into his Superman outfit.

Singh’s Masters victory – The only major title Woods didn’t win in the 22-month stretch from August ’99 to June 2001 turned into the ultimate motivational factor for a guy who could find incentive in a pile of bread crumbs. Neither Tiger nor Williams was fond of Singh, whose claim to the green jacket in 2000 sent Woods to the U.S. Open with smoke pouring from his ears.

At Pebble, Williams recalls Tiger working on his putting until dark that Wednesday night. “During the practice rounds, he couldn’t find a stroke he was comfortable with,” the caddie told me in 2010. “So he went to the practice green and stayed there for hours. He was making a lot of putts, but he didn’t like the way they were going in.”

Such a level of devotion is almost impossible to maintain, but at the age of  24, unmarried and uncommonly focused, armed with a competitive drive that seemed to fuel his skill and willpower, Tiger Woods did things no other golfer has ever done. He has returned to Pebble Beach several times since, most notably at the 2010 U.S. Open, where his attempt to win a 15th major succumbed to a lackluster Sunday, but there is no dismissing the notion that two milestones in his illustrious career were achieved on American golf’s most hallowed seaside turf.

It’s nice that he’s back. We’ll see if it’s just a one-shot deal.