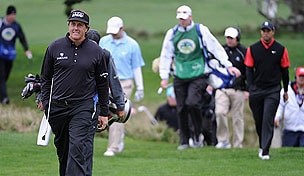 It would appear the Big Lefthander still has plenty of golf left in him, quelling any whispers that he was done at age 41. No one travels from the valley of tribulation to the trophy ceremony faster than Phil Mickelson. His 40th PGA Tour victory was by no means the biggest of his career, but few have been more timely. Throw in the Pebble Beach factor, the six-shot deficit he wiped out before the Sunday telecast even made the network – and the 14-time major champion he trailed by two at the start of the day but beat by nine ...

No green jacket for this one, of course, but much greener pastures. As was the case in 2011, when Mickelson awoke from a somewhat dormant start to win in Houston, he's now back on the map and leaping onto everyone's short list of Masters contenders. A lot can happen between now and the second week of April, but once again, Philly Mick has shown he can turn it up when he really needs to.

At Torrey Pines 2 1/2 weeks ago, Mickelson looked unprepared to compete, firing a 78 on a course where he used to shoot par with his eyes closed. The performance left me seriously wondering whether Lefty could remain one of the game's top players – whether he could still make enough putts to relieve the stress caused by his errant drives. My reasoning was pretty simple: if the guy couldn't hole 10-footers in his own backyard, perhaps the problem had become chronic.

In going bogey-free over his final 34 holes at Pebble, however, Mickelson played his tidiest golf since winning the 2007 Players Championship. At a place where 6 feet for par can leave you feeling 6 feet under, where the Poa annua greens have a somewhat perverse sense of humor, Mickelson was airtight. His 30-foot save at the par-3 12th may not seem like a big deal in retrospect, but it came after Tiger Woods holed out for birdie from a greenside bunker, leaving Woods three back instead of two.

From there, the Dude in the Red Shirt turned into the Guy with the White Flag. As deft as Woods has gotten at rationalizing his inability to win an official golf tournament, the challenge among the rest of us becomes an issue of balanced perspective. Once you've spent a dozen years piling up victories at an unprecedented pace, is there such a thing as a positive loss?

It's one thing not to contend at all – there are plenty of wealthy men on the PGA Tour who rarely, if ever, find themselves in the picture at important tournaments on Sunday afternoon. I honestly don't know what is more shocking: that three consecutive PGA Tour winners have rallied from third-round deficits of five shots or more, or that Woods has teed off in one of the final two groups of the final round in consecutive starts and failed to get it done.

The blown-lead thing is fairly easy to explain. At Torrey, Kyle Stanley got a bit unlucky, then wasn't able to gather himself after fate dealt him a wicked hand. In Phoenix, Spencer Levin was in over his head. He'd come close to winning just once before, having lost in a playoff to Johnson Wagner at the opposite-field event in Mexico last February. Seven strokes is a real nice lead, but pro golf becomes a different game on Sunday, one best played with a pocketful of pressure-tested experience.

As for Charlie Wi, he led Ken Duke by three after 54 holes, but with Mickelson and Woods in the group just ahead – and Mickelson lighting it up from the start – it's easy to see how anyone still winless after 162 starts would feel like he showed up at the wrong party. For all the pregame buzz generated by the penultimate pairing, however, there was no showdown. Woods came out flat, Mickelson went 5 under through the first six holes and remained uncharacteristically accurate off the tee, missing just one fairway all afternoon.

Very few of Lefty's victories over the years have occurred without at least a little slipping and sliding. There is always adventure, much of it adversarial. His ability on and around the greens is the reason he has won 40 times, if not the 40th time, a triumph notable in that it reminds us how quickly things can change. Mickelson is now the Roadrunner, with Woods playing the role of Wile E. Coyote. Doesn't matter what color your shirt is – those anvils are bound to leave a mark.