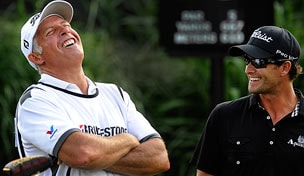 ’Tis the season to write columns with a holiday hook, and I’m not one to look a gift reindeer in the eye – or pass on a cheap lead. Santa Claus is coming to town, more than likely with the name of some investment company slapped across his sleigh, for we all know you can’t stick a peg in the ground these days without a title sponsor coughing up $10 million, then slamming the same commercial down our throats 12 times in 90 minutes.

Dasher, Dancer and Prancer have all signed with Chubby Chandler’s management agency. Rudolph just wants to know if that bulb on his snoot should be considered an immovable obstruction, which might buy him a free drop and allow the Dude in the Red Suit to come south and make his rounds before sunrise.

Ain’t no time for slow play this time of the year, folks. For the man who has everything, we offer a few pointers on wants, needs and suitable alternatives to the striped necktie.

Tiger Woods – A parka and some new hiking boots. Gonna be a long, slow climb to the top of Mount Nicklaus.

Adam Scott – A killer instinct. Or at least a pint of cold blood.

Rory McIlroy – An appearance on the cover of Tiger Beat, pun accepted, thinking that might expedite his departure from this awkward tween phase.

Yani Tseng – A battlefield promotion. No woman has ever appeared more capable of competing with the big boys on a regular basis. Tseng is a remarkable player living in near-anonymity. A week or two at Camp Finchie would change that.

Dustin Johnson – Does Santa Claus give out mulligans for iron shots from the center of the fairway?

Bubba Watson – A cookbook. The guy has all the ingredients to be a superstar. He’s just gotta figure out the right recipe.

Lee Westwood – A major title. England still hasn’t won one since Faldo, which has me thinking: Maybe he should move to Ireland.

Sergio Garcia – A copy of the Beach Boys album “Pet Sounds,” just to make sure he keeps picking up good vibrations. Go ahead and smile, Sergio. Life is good.

Webb Simpson – A 2011 calendar and a copy of the movie “Groundhog Day.” Just keep doing what you’re doing, dude.

Jim Furyk – A videotape of the 2011 Presidents Cup. No need to edit the thing.

Anthony Kim – An alarm clock, but I’m thinking he got one last Christmas.

John Daly – Two weeks at a camp for underprivileged kids. Maybe then he’ll stop acting like an overprivileged one.

Bill Haas – A really good accountant. And a spot on the PGA Tour policy board, which would help him block any proposed changes to the FedEx Cup format.

U.S. Ryder Cup captain Davis Love III – The pre-hydrant version of the Dude in the Red Shirt. And another Webb Simpson to come charging out of nowhere.

Rickie Fowler – A fire-retardant wardrobe to ward off the heat on Sunday afternoons. Any color is fine.

The Avid Golf Fan – A year full of greatness and surprise, lots of viewer-friendly storylines and a couple of king-sized conflicts to keep things honest. It’s a wonderful game, but hey, even George Bailey didn’t find clarity until he got to that bridge.