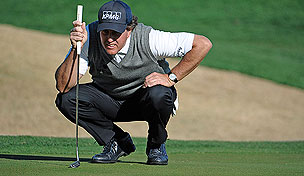 We should know by now never to presume anything with Phil Mickelson, a man who has been down every road and a few that didn’t make the map. The achievements obviously outweigh the busts, but more than most hall of famers, Mickelson’s career has been a mix of unpredictability and volatility. When it comes to expectations, you enter at your own risk.

That doesn’t make Lefty’s 2012 debut at Torrey Pines any less shocking. He referred to his opening-round 77 as pathetic – too much to overcome Friday, when a 68 left him two off the cut. It wasn’t so much Thursday’s bloated score that caught my attention as the way Mickelson produced that 77. His short game was as sloppy as I’ve ever seen it. He needed 32 putts despite hitting just nine greens, a combination far more likely to come from a 5 or 6 handicap.

It wasn’t the vintage Mickelson crash-and-burn, which typically featured a couple of questionable club selections, a heavy foot on the gas pedal and a late water ball. The only similarity between Thursday and yesteryear was that Philly Mick didn’t hit many fairways. In the past, he didn’t always have to. Maybe now he does.

Despite what might be described as a Mickey Lolich physique, Mickelson has remained remarkably healthy during his 20 years on the PGA Tour. Tiger Woods has the chiseled body – and has spent more time on the disabled list than anyone in the game’s top tier. At the age of 41, Lefty’s knees and back work just fine. He has played through the arthritic condition that plagues his hands. His fluctuating weight has never been an issue competitively.

Stanley leads Snedeker by one

He’s still not making putts, however, and that is a malady that can bring down any man who misses half his fairways. The belly putter may have been a passing phase for Mickelson – a false answer to a mid-life crisis for a guy who holed more 15-footers than almost anyone for a long, long time – but the fact that he even tried a broomstick hints at a problem that may not come and go.

You look at the number of tour pros who have won major titles in their 40s, and it’s a very short list. Mickelson is anything but your Average Pro, and it’s worth noting that he claimed all four of his majors after a decade of Big Sunday futility. His career has followed a unique path, making him one of the 20 greatest golfers ever, but at some point, everyone must accept the notion that they aren’t as good as they once were.

Conventional wisdom, with an assist from history, tells us that it often happens to a player in his early 40s. To overstate the significance of Mickelson’s 77 would be silly – it was one bad round that he followed up with a fairly decent one. Since a statistically superb 2008, however, his numbers, particularly on the greens, have gone in the wrong direction. And since his stirring triumph at the 2010 Masters, Mickelson’s results have not been befitting: just one win in 34 starts.

That victory occurred last April at the Shell Houston Open. Three months later, Lefty finished second at the British Open, a sweet-and-sour runner-up that remains the last time in was in serious contention. Sweet because he overcame a history of mediocre play at the British. Sour because he would have won the tournament if he’d made his 4-footers.

Six weeks later, Mickelson showed up at the Deutsche Bank Championship with a belly in his bag – a radical, do-whatever-it-takes move that didn’t resolve the matter. I was fortunate enough to play a round of golf with Lefty back in the fall of 1999. We went out to Peachtree CC in Atlanta the day after the Tour Championship, and in four hours, I learned more from Mickelson about reading greens than I could have figured out myself in 40 years. 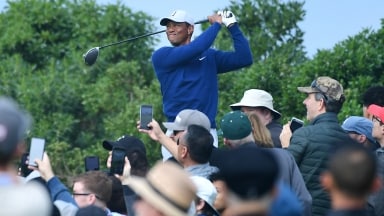