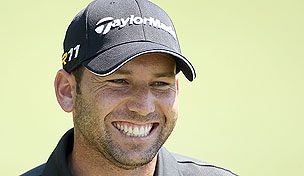 My first personal experience with Sergio Garcia was at the 1999 Byron Nelson Championship – Sergio’s U.S. debut and second event as a professional. Perhaps 150 kids, many of them teenage girls, gathered on the path from the 18th green to the clubhouse that Sunday afternoon, emitting a commotion seldom seen or heard at a boring old golf tournament.

Garcia seemed to understand what all the fuss was about and instinctively reveled in the attention, signing and posing for the better part of an hour before heading downstairs to the locker room. In our two or three minutes together, he must have called me “sir” five times. At the age of 19, Sergio demonstrated a wealth of magnetism unlike any young player I’d covered, and with Tiger Woods grinding away at swing changes in the spring of ’99, the premise of two charismatic superstars leaping into a longstanding rivalry could not have gifted pro golf with a brighter horizon as the century came to a close.

Barely three months later, Sergio would chase down Woods on the back nine at the PGA Championship, hitting that unforgettable recovery shot from behind a tree, then scampering up the fairway to watch it tumble onto the green. It’s certainly no coincidence that Tiger began his best-ever stretch of golf (2000) shortly after Garcia became so noticeable in his rear-view mirror, after David Duval had unseated him atop the world ranking and Vijay Singh won the 2000 Masters.

I would get to know Garcia fairly well over the next several years – the longest stretch of quality time occurred at the now-defunct Southern Open. Sergio’s love of fast cars made for a sexy theme to a feature I was writing at the time, so we rented a Ferrari and brought it to Callaway Gardens. For reasons still unknown, I agreed to sit in the passenger seat while Garcia whipped around the back roads of Georgia at speeds in excess of 150 miles per hour. Not even an ornery Steve Williams has scared me more.

My catalog of Sergio memories seems relevant again now that Garcia seems to have revived his dormant career. He has put himself in contention after 36 holes three times in 2011, which doesn’t mean much, but he did play well at the U.S. Open, then lost in a playoff last week on the European Tour, which gets him back into the British Open. It was at Carnoustie in 2007 when things really began turning in the wrong direction, when the dashing young Spaniard with the matinee-idol smile suffered the most excruciating of his tough losses.

Yes, he would notch the biggest (and last) of his seven PGA Tour victories at The Players Championship the following May, but Sergio Garcia was born to be a national champion, and that hasn’t happened. The irrepressible grin has long since vanished beneath a pile of disappointment.

Garcia led by three after 54 holes at Carnoustie, which caused him to try a smart-conservative route to the claret jug. Alas, he was dusted by Padraig Harrington, who actually double-bogeyed the 72nd hole to let Sergio into a playoff.

Harrington won in overtime, then watched Sergio self-destruct down the stretch at the ’08 PGA. His competitive soul corrupted, his boyish exuberance flattened by the toll of a recent past, Garcia’s downfall will, until further notice, remain one of the great mysteries of golf’s modern era. Twelve years ago, he was Rory McIlroy and then some – a 10-time major champion in the making who never missed a fairway, chipped in twice a round and holed 15-footers with his eyes closed.

Maybe there’s some gas left in the tank.

Maybe the Guy Upstairs and his golf buddies just wanted to make a point.

The game needs him, and not just a little bit. Not even Woods can plead guilty to a series of cheesy beer commercials starring a fashionable young stud who flicks a pea-sized wad of paper into the navel of a bikini-clad hottie or be an authentic ladies man who arrives at the black-tie affair with all the subtlety of James Bond – and reduces the corny punch line to delicious new lows. Tiger busted out windows at the school-book depository with his 7-iron. Sergio used his 7-iron to over-club his way to the best seat at the swimming pool.

Garcia and Adam Scott are the pretty boys gone sour, but there are no expiration dates in this refrigerator. Perhaps Scott never had the stomach or the short game for superstardom. The Artist Formerly Known as El Nino, however, had it all – at least until he started missing those 4-footers. Finding pro golfers who move the needle can be tougher than plucking a thumbtack from a haystack. If nothing else, Garcia spent years causing ripples on golf’s mainstream Richter Scale.

He is probably more recognizable than he is popular, but a great big comeback would turn up both dials. A few minutes after the conclusion of the playoff at Carnoustie – eight long years after the initial meeting in Dallas – I went to see a different Sergio in a different locker room. The cramped quarters left nowhere to hide. Caddie Glenn Murray’s eyes were filled with tears, as were those of Sergio’s father, Victor. His son would walk in a few minutes later and ask me to leave, which I did, and not five seconds after I walked out the door, I heard Sergio wail loudly and painfully, like a guy stuck with the sharp end of a dagger.

In his first competitive round in the United States, Garcia shot a 62. It remains his best score ever in this country. Twelve years ago, nothing was impossible. With the aid of a little wishful thinking, nothing still is.