ShotLink may be the answer to slow play 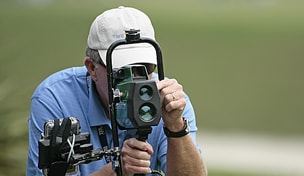 Getty Images
ROGERS, AR - SEPTEMBER 12: Sandra Gal of Germany watches her drive from the first tee during second round play in the P&G Beauty NW Arkansas Championship at the Pinnacle Country Club on September 12, 2009 in Rogers, Arkansas. (Photo by Dave Martin/Getty Images)  -

Slow play is pro golf’s version of health-care reform: the problem with lots of answers but no solutions, the issue that won’t go away. An optimist might suggest those playing for seven-digit winner’s checks should take all the time they need to hit a 6-iron, oblivious to the notion that a Tour pro who takes two minutes to strike a shot is harming the game both commercially and recreationally.

It’s wrong. It’s selfish. And it’s supposedly against the law on the PGA Tour, which has a slow-play policy but enforces it arbitrarily, if at all. Fining a Tour pro for 10 bad times is a detour, not a deterrent. It’s a convenient way to address the matter without rectifying it.

Players must be penalized competitively for any policy to have an impact, a point I made last Wednesday when asked about slow play on “Morning Drive.” I was somewhat unsatisfied with my response, however, so I gave the issue more thought. How do you truly curb the slow-play scourge without imparting too much effect on a tournament’s outcome? Do you institute one set of guidelines for Thursday and Friday, then use a different set for the final two rounds?

At some point Sunday, a rare burst of reason led to an idea. More than anything, Tour pros don’t like to be embarrassed among their peers. Why not use ShotLink to time all players between shots, and then post the results with the rest of the statistics? I’m not talking about sticking it down at the bottom of each profile with their average distance to the hole from 100-125 yards – you post it with the primary stats: driving distance, greens in regulation, etc.

The Tour currently allows a player 45 seconds to put his ball back in play, which is a very reasonable standard. If a guy is taking 78 seconds per shot, he’s costing the field about 40 minutes, which is more than enough to ruin the overall pace and affect the performance level of those behind him, which is unacceptable. If the Tour is serious about combating the problem, and at this point, there’s little reason to believe it is, it has to do something that works.

It has to find a comfort zone that is two parts sensible, one part radical – particularly in the early-season events on the West Coast, when there is limited daylight. Since debuting in the summer of 2001, ShotLink has made tremendous strides in terms of providing the pro game with a statistical database. The system isn’t perfect, but from a wide-angle perspective, it works well. From the avid golf fan who watches at home every week to the media and those who attend tournaments, there is value in the information.

If we’re going to provide details of every stroke made at events overseen by the Tour, there’s no reason not to include the length of time required to make those strokes. That is, unless the Tour is afraid to expose the slowpokes with an official, factual formula, which I suppose could very well be the case. At that point, we’re right back to where we started – with twosomes taking almost 4 ½ hours to play a round of golf. Ridiculous.