Some stats can help tell the story 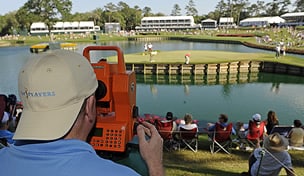 Only in recent years has the PGA Tour developed a statistical database befitting of an elite sports league. ShotLink is comprehensive and user-friendly, and from a journalistic standpoint, there is no better resource when it comes to qualifying a player’s strengths and weaknesses. Some old-schoolers will tell you the only number that matters is the one you shoot, but information is knowledge and knowledge is credibility.

Perhaps there is nothing to be learned from the fact that Tiger Woods is slightly more prone to missing left than right off the tee, or that Woods’ sand-save percentage has fallen in each of the past four years. If everything happens for a reason, however, there’s a reason why everything happens. ShotLink illuminates a Tour pro’s competitive DNA. It can’t measure a player’s heart rate or the severity of a lie in a greenside bunker, but it does document the outcome of every shot struck in a game where the difference between first and 125th is less than two strokes per round.

Every statistical profile tells a story, some being easier to read than others, as my examination of six prominent players might attest.

Jim Furyk: We start with the 2010 FedEx Cup champion because his performance dipped so sharply in 2011: three wins to zero, seven top 10s to four, three missed cuts to seven. Furyk actually drove it five yards longer last year, remained in the top 20 in driving accuracy and hit more greens than he has since 2007, but his putting, which always made him one of the game’s top control players, more or less ruined his season.

From every distance, in just about every category, Furyk went from ranking among the Tour’s top 25 percent to the bottom 25. He finished 160th in birdie-conversion percentage, a crucial stat which basically combines how close you hit it and how often you convert the opportunity. Perhaps it was an equipment change that did him in. Perhaps something does happen to a man once he’s past his 40th birthday. Regardless, a player of Furyk’s ilk cannot overcome his length deficiency unless he holes putts. Doesn’t matter how straight you hit it.

K.J. Choi: You look at some statistical profiles and wonder why the guy isn’t winning $6 million a year. Other players accomplish far more than the numbers would suggest, which is a good way to describe Choi. He is a remarkable golfer in a very unremarkable way, an underrated overachiever whose ability to economize strokes can be difficult to quantify. Driving distance? 134th. Greens in regulation? 81st. Birdie conversion? 141st. Par-5 scoring? 93rd.

More than just getting a lot out of it, Choi wins tournaments, usually on challenging courses, with each win seemingly bigger than the one before. For all his relative mediocrity in the statistical breakdown, he finished 19th in scoring average, seventh in FedEx Cup points and fourth in money last year. How does Choi do it? He hits the ball close. In every distance category from 50 to 200 yards, he ranked no worse than 42nd in proximity to the hole. He is exceptionally precise, and if he’s not the most opportunistic putter who ever lived, he avoids the throwaway strokes that derail many of his peers. There are worse traits to have when you’re playing a difficult venue.

Webb Simpson: That big year was no accident. Simpson led the Tour in scoring average by a comfortable margin over Luke Donald despite playing 25 more rounds than the Englishman. He also led in the all-around ranking, an accumulation of the eight primary stats, so on paper and grass, he’s really good. You can look all you want, but there are no weaknesses. More than Donald, Matt Kuchar, Hunter Mahan or any of the emerging young players, Simpson has the ability to dominate.

He’s not crazy-long (296.2), but he’s definitely long enough. In 2011, Simpson’s proximity-to-the-hole rankings were outstanding: third on the tour from 150-175 yards, fourth from 50-125. Unlike most bombers and tall guys, his half-wedge game is superb. My favorite number in his profile is his scrambling rank – 16th behind a bunch of singles hitters and little guys. Simpson is simply the complete package. There is absolutely no reason to believe he won’t become America’s best player.

Dustin Johnson: Another prodigious talent with more big-game experience than Simpson, almost all of it best forgotten. Johnson isn’t a very good bunker player and finished 142nd on par 3s in 2011. His GIR percentages from 75 to 125 yards were atrocious. Some people think he’s a good putter, although ShotLink begs to differ – Johnson was among the Tour’s worst in numerous categories last year. We’re talking about a guy who has a lot to improve on, yet Johnson finished fifth in money and fourth in FedEx points.

Length can solve a lot of problems, but Johnson is not without a multitude of other strengths. He birdied par 4s more often than anybody in ’11 and ranked eighth in birdie-conversion, so if he’s not a good putter, he knows what to do when opportunity knocks. There is no stat to chronicle the “killer miss” – one of those Tiger drives that ends up closer to another fairway – but Johnson consistently puts his ball in play and is strong enough to hit greens from almost any rough. A good player who could get a lot better.

Phil Mickelson: Still real long, still hits lots of greens and makes lots of birdies, but at age 41, Philly Mick comes off a down year (one victory) by his hall-of-fame standards. He ranked sixth in GIR from off the fairway and third in scrambling from the rough, affirming his penchant for finding scoring opportunities when in trouble. Widely recognized as one of the best mid-range putters ever, Mickelson ranked no better than 66th from any distance last season, which explains a lot of things.

I sometimes get the sense that Mickelson is as good as he wants to be, supremely gifted but not always focused as he enters his 20th season on the Tour. Major championships aren’t all that matter, but it’s fair to say Lefty packs an extra bag of desire four times a year. The fact that he ranked 169th and 157th from between 10 and 20 feet in 2011 led him to try a long putter, leading some to believe his best days are behind him, but this is a guy who has spent much of his career in the Land of Peaks & Valleys. As good as he wants to be. We’ll let Mickelson take it from there.

Luke Donald: Those who followed him in college probably aren’t shocked by Donald’s high level of consistency, although it does seem a bit funky that a guy ranked 147th in driving distance has become the No. 1 player in the world. To rank as the Tour’s best putter in back-to-back years is quite an accomplishment, but in 2011, Donald’s ball-striking is what got him to the highest level. From 152nd to 41st in GIR, from 120th to 57th in driving accuracy despite adding seven yards – when you hole 15-footers the way he does, it’s all about a smooth ride getting there.

The interesting thing about Donald’s future is to see what happens if the hole suddenly gets smaller. Swing coach Hank Haney will tell you putting is the great unreliable – you can win tournaments on the greens and lose them on the greens, but great careers aren’t built there. There are too many uncontrollable variables involved in what is a very exact science. Ball-striking is a subjective procedure, putting an objective one. Either you miss or you make, and when you think about it, the length of that putt represents the quality of your work from the tee.

Donald’s career progression is quite admirable. He has become a control player with an outrageously tidy short game, and the longer you look at his profile, the more you realize how good he has gotten.