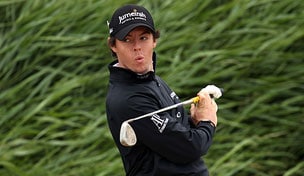 Some random thoughts while I wipe out approximately one-third of my younger daughter’s Halloween candy….

•  With back-to-back victories in his native Spain, Sergio Garcia’s comeback must be legit. Either that or he was really, really homesick.

•  I’ve heard Camp Ponte Vedra’s explanation for moving Player of the Year voting back a couple of weeks. And it only makes me more skeptical of their warped commercial mindset.

•  Given the way I’ve been playing and the $10 Nassaus we favor on the weekend, I’m figuring that here-today, gone-tomorrow snowstorm that hit the northeast Saturday morning saved me $70 or $80.

•  Regarding this week’s high-end gathering in China, a World Golf Championships event without official money is like a birthday party without cake and ice cream. Still worth going, but what’s with all the artificial dough?

•  Yeah, I know Boy Rory just won in Shanghai, but McIlroy’s post-U.S. Open behavior continues to bother me. I mean, making out in public with your famous girlfriend is one thing, but dumping your agent and having a little tiff with Lee Westwood? Smells like a skanky little catfight to me.

•  The field Sergio beat last week was better than the one he beat the week before, but I’m not quite prepared to declare him major championship-ready. A win’s a win, but if you want to do it at an elite event against a world-class bunch, you’ve got to make putts. And we all know how Sergio has been with that.

•  For the record, Tiger Woods finished 186th on the PGA Tour in both driving accuracy and total driving. He hit 48.9 percent of his fairways, by far the lowest of his career. I’ll bet that leg hurt.

•  If I’m U.S. Presidents Cup Fred Couples, I’m buying Keegan Bradley a round-trip ticket to Melbourne in advance, figuring Steve Stricker’s ailing neck might force him to stay home. If healthy, Stricker is America’s most indispensible player – a guy who makes 25-footers and has partnered well with Woods – but Bradley wouldn’t be the worst replacement by any stretch.

•  Until someone produces conclusive statistics proving that long putters are more reliable than conventional ones, the argument calling for their ban is irrelevant. Maybe the USGA has some scientist working on that over in Far Hills, but I seriously doubt it.

•  One knowledgeable source says McIlroy wasn’t into Camp Chubby’s partying, carefree ways – that he sees the route to superstardom through lots of trips to the gym and lots of range balls. Hard to argue with that, but it’s not a reason to pack your bags and find yourself a new agent, nor is any spitting match with Westwood.

•  Who knew? Sergio is speeding down the comeback trail, trying to catch Adam Scott, another phenom-turned-has-been who is well down the road to full recovery. Then there’s Anthony Kim, who missed a 3-footer in a playoff last Sunday, allowing McIlroy to walk away with the win. Maybe AK’s finally ready to get serious. He seems to play well overseas, without the posse around to distract him. Hey Anthony, we can’t give you that 3-footer, but can you take a hint?