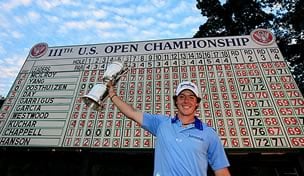 Getty Images
CHRISTCHURCH, NEW ZEALAND - FEBRUARY 17: A ball sits in the bunker on the 11th hole during the final day of the NZPGA Championship at Clearwater Golf Course on February 17, 2008 in Christchurch, New Zealand. (Photo by Sandra Mu/Getty Images)  -

To all those suffering heartburn over the onslaught of Rory and Tiger comparisons, grab yourself a roll of antacid tablets and accept the giddy reality.

After waiting an eternity for one of golf’s burgeoning stars to tinker with the competitive landscape, young Rory McIlroy has taken quickly to the task of moving mountains and flattening the past. Yes, Padraig Harrington went a bit over the top in his assessment that McIroy is a legitimate threat to Jack Nicklaus' all-time record of 18 major titles, but there's no crime in getting carried away.

Besides, most references to Woods were in regard to dominant single-week performances, not their overall bodies of work.

My point? People finally have a reason to slobber all over someone who doesn't wear a red shirt on Sunday. McIlroy was touted as very good and has proven to be even better – rare is the phenom in any sport that exceeds the most radioactive hype.

At last, one can say there's a new sheriff in town and his name ain't Reggie Hammond.

Obviously, McIlroy would rather be halfway to the Grand Slam than shooing away the demons of his Masters collapse with the victory at Congressional, but the speedy-rebound factor only adds style points to this accomplishment. I certainly was among those who thought the train wreck at Augusta National would leave a mark. Plenty of young players have blown 54-hole leads at majors, but a vast majority were never expected to hold that lead in the first place. Project Rory was moving full-speed ahead, and in stumbling to a closing 80 in such unsightly fashion, you did not need a degree in negativity to figure it might take him a while to get back on the horse.

He chose Secretariat. He said he'd learned from his mistakes at the Masters, which is what you have to say, but this kid really did. As dazzling as McIlroy's first two rounds were at Congressional, Saturday's 68 was every bit as impressive.

Having slept on the Masters lead for three consecutive nights then waking up to a nightmare, the Irish lad returned on Moving Day with an airtight arsenal, expanding his lead from six to eight with a brand of golf about as conservative as any 22-year-old can muster.

It was a perfect combination of aggressive and protective, but he still had 18 holes to go. I definitely think McIlroy was partially victimized by fate on Sunday at Augusta National – not just sleeping on the lead all week, but then getting paired with another quick player (Angel Cabrera) in the final group behind a procession of slower players. With so much time to wait between errors, Rory had little choice but to actually ponder the burden. It's not like Cabrera – who finished seventh, five strokes back – tore the place apart, either.

So now we're left with a prodigy-turned-prince who already has overcome enormous competitive trauma, a guy with immense physical skill who just found a three-ton package of mental toughness in his locker. Please, spare me the notion that McIlroy was the beneficiary of a U.S. Open venue softened by rain, then relegated to sitting-duck status by a lack of wind.

If Congressional had been firm and fast, the kid's precision off the tee and towering iron shots might have produced a final margin of larger than eight. McIlroy wouldn't have broken the tournament scoring record, but then, Woods didn't dismantle Pebble Beach (2000) in a four-club breeze or from 6 inches of rough.

In golf, they don't put asterisks next to the records achieved in favorable conditions or discount them altogether, as they do in track and field. Some people are slow to accept the whim of the competitive element, but in our game, those with logical sensibilities embrace the idea golf is contested on a massive playing field, and thus, more likely to be affected by random variables.

The bounce of the ball, the luck of the draw – premium performance avoids and demolishes obstacles. It doesn't fall prey to them.

As for next month's gathering at Royal St. George's, we've swiftly gone from a field full of nobody's favorites to a very clear-cut top dog.

I would be surprised if McIlroy goes off at anything higher than 7-to-1 odds, especially if Tiger doesn't show. Greatness validates itself through monumental accomplishment, but as easy as it was to see that McIlroy was a player with extraordinary potential, he has matured faster than any realist could have imagined, producing brilliance barely two months after suffering through the reverberations of the Masters humiliation.

Woods never blew a four-stroke lead at a major with 18 holes to play.

Woods never shot a 43 on the final nine while still in the hunt, and he certainly didn't carry himself with such admirable deportment after the few occasions when he failed to get it done. This kid has done all that and a whole lot more.

What happened on the second Sunday in April wasn't the best thing that ever happened to McIlroy, but there's something to be said about a young man who graduates with honors from the University of Adversity.

Unless Woods never comes back, that Rory and Tiger thing won't be disappearing anytime soon. You clutch your chest and call it undue pressure. I'm going double thumbs-up and calling it the ultimate compliment.