Significant others have significant effect on players' games 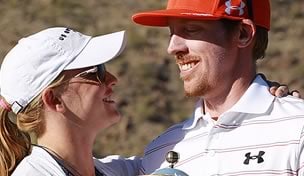 Getty Images
VERNON, NY - OCTOBER 02: Tim Herron watches his shot on the first hole during the first round of the Turning Stone Resort Championship at Atunyote Golf Club held on October 2, 2008 in Vernon, New York. (Photo by Michael Cohen/Getty Images)  -

MARANA, Ariz. – While in Arizona covering the WGC-Accenture Match Play Championship, I spent all day Tuesday chatting with players off-camera and uncovered some fun, interesting stories.

Let’s begin with the finalists. In the last couple years we’ve watched Hunter Mahan grow up. He went from one of golf’s most eligible bachelors to a content married man, landing a dream girl former Dallas Cowboy cheerleader. Before Hunter met Kandi, he was the single guy at the Ryder Cup. His teammates would rib him because he was the only one at the opening ceremony without a significant other. For a laugh, they bought him a doll named ‘Monique’ to accompany him down the aisle.

A shy guy with a quiet sense of humor, wife Kandi brings out the best in Hunter and in turn, Hunter brings out the best in Kandi. A few weeks ago, after Mahan’s trip to compete in the Middle East, Kandi went to Uganda on a charitable mission with Nick Watney’s wife, Amber. They visited an orphanage and worked at a food bank. He said it was a life changing experience for his wife.

Another part of Hunter’s transformation is revealed through his involvement with the Golf Boys. A goofy foursome of PGA Tour-players-turned-singers who recently became an Internet sensation with their ‘Oh Oh Oh’ video, Hunter is the one with two left feet, donning a long fur coat exposing his bare chest. When asked why he wanted to put himself out there like that, he said he wanted to share his “dancing prowess with the world. It’s a Bruce Wayne, Batman thing” he said. The Golf Boys are in the planning stages for their next video titled “Mama Said We Could Be Anything.”

As for Rory McIlroy, he too has a significant other who’s bringing out the best in him. He shares a high profile relationship with tennis world No. 1 Caroline Wozniacki. Rory told me she has everything to do with his new motivation levels in the gym. He’s gone from a youngster who had cheeks a grandmother would want to pinch, to a chiseled young man who some say can bench press 300 pounds. He told me he out-lifts Caroline but she can still outrun him. Tiger Woods once told me the same thing about Elin when they were married.

Regarding Tiger, Rory said they had a long talk about fitness when they were grouped together in Abu Dhabi. Woods told McIlroy he shouldn’t listen to the critics who say bulking up is bad for your golf swing. He said to look at athletes in other sports. If you want to get ahead and be taken seriously, you have to get the most out of your body. It’s obvious that Rory completely agrees.

Fowler’s Fuzz: If you’re not a fan of Rickie Fowler’s new facial hair, don’t tweet him about it. Rickie told me the Internet bashing about his goatee is only motivating him to keep it longer. The head pro at his new home club of the Medalist nicknamed him “Jack Sparrow” and it’s beginning to stick. At the Northern Trust Open at Riviera a couple of weeks ago, Gary McCord referred to him by that name on the air.

Westwood’s World: Lee Westwood may not be a household name here in the U.S. but he’s a treasure in his native England. Outside of golf he owns 16 racehorses, the most successful one named Hoof It. He’s also recently been honored with an Order of the British Empire by the Queen and lives in a house that’s fit for a king. Westwood told me he owns a 55-acre lot in Nottinghamshire that has six houses on the property including an 18,000-square foot mansion he and his family call home.

GMac’s New Pad: Graeme McDowell is in the final stages of building his new home in Lake Nona. He said it’s an 8,500-square foot spread complete with a “man cave” that features a snooker table and a wet bar with an endless supply of Guinness on tap. It also has a cinema. As a gift, his caddie bought him 20 movies he’s never seen that are considered American classics. Flicks like “The Shining,” “Risky Business” and “One Flew Over the Cuckoo’s Nest” are included. Graeme told me he loves suspense thrillers and action films but he’s not afraid to pop in a romantic comedy. That’s well played by the man officially named Northern Ireland’s most eligible bachelor.

Ishikawa’s Fake ID: Twenty-year-old Japanese sensation Ryo Ishikawa told me his favorite thing to do when he’s not playing golf is to play interactive video games. He, like Watney, uses an anonymous name to compete online against total strangers. The next time you’re engaged in an interactive soccer game, you could be competing against Japan’s biggest star.

Robert’s Rock: Currently ranked 57th in the world, Abu Dhabi surprise champion Robert Rock is still fighting to climb into the world’s top 50 and qualify for the Masters. He’s never played Augusta National. Growing up in England, Robert told me he’s recorded and watched every Masters tournament since 1988. It’s a dream for him to get there but he said “it almost seems like a tournament I’m destined to watch on TV.” He’s going to play the WGC-Cadillac Championship to try to improve his world rank, then assess from there.

The Most Interesting Man in the World: Before Miguel Angel Jimenez’ first-round match against fellow Spaniard Sergio Garcia, I asked him to compare the two. He said “Sergio and I are like a Euro coin: Two faces, different. Same value.” He added that the 32-year-old Garcia is entering his prime golfing years and he feels certain that he can still win a major. 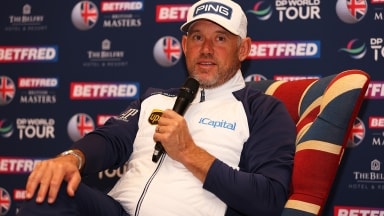 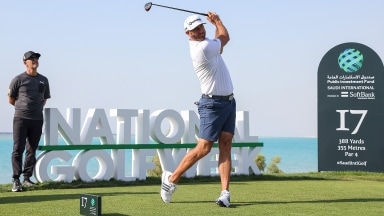 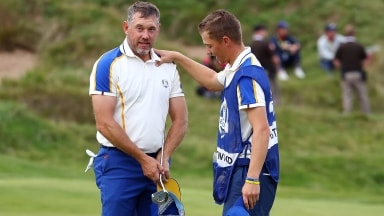