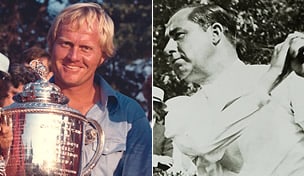 Once again Tiger Woods at the PGA Championship this week at Kiawah Island has a chance to take the next giant step in his quest to equal and eclipse Jack Nicklaus’ record of 18 major victories.

But first and foremost, Woods has an opportunity to achieve another significant milestone – matching the record of five wins in the PGA Championship jointly held by Nicklaus and Walter Hagen. He can thus take two giant steps this week – moving within three wins of the overall Nicklaus record for majors and simultaneously joining Hagen and Nicklaus as the only five-time winners of the Wanamaker Trophy, truly a major accomplishment.

Uniquely, the PGA Championship is a story of polar-opposite formats, the only one of the four majors to be conducted under different conditions of play. From 1916-1957, the PGA was match play, a grueling head-to-head format because of the number of holes that must be played in a single day; from 1958 on, it’s been played in the stroke-play format.

Hagen was the world’s first full-time tournament professional. He won so often and in such flamboyant style that he singlehandedly ushered in the era of the playing pro, elevating the status of playing professionals from little more than second-class citizens. In doing so, he became known as “Sir Walter” for his regal demeanor and lavish antics. When pros were not allowed in the clubhouse for the 1922 British Open at Royal St. George’s he ordered a limo to be parked in front of the clubhouse, changing his clothes in the car and having his chauffeur serve him his meals on a silver tray. He played often with his friend the Duke of Windsor, the future King of England, calling him Eddie and instructing him to hold the flagstick while he putted. Needless to say, Hagen was golf’s first great showman, perhaps the greatest. He was a larger-than-life figure who played with flair and panache, thus capturing the imagination and adulation of the public.

“The Haig” was not a picture-book swinger of the club, as he had a pronounced sway with his longer clubs, but with a deadly short game, especially on the greens, he could really play. He was known to say of his sometimes-loose play on par 4s – “three of these and one of those, still makes four.” He could break your spirit with his putter.

Hagen won his first PGA Championship in 1921 against “Long Jim” Barnes, 3 and 2, in the 36-hole final. In 1923 he lost to rival and good friend Gene Sarazen in a heartbreaker after 38 holes.

But then Hagen went on an incredible tear, capturing the Wanamaker Trophy in each of the next four years (1924-27) against elite players, all but one a current Hall of Famer. (The other, Jim Turnesa, won 14 times on Tour.)

Such was Hagen’s dominance that in the 15 years he played in the PGA, he won 80 percent of his matches, eclipsed only by a few percentage points by Ben Hogan and Byron Nelson, and little-known Walter Burkemo. Deservedly, Hagen is considered the greatest match player of all time. He was, as Charlie Price wrote, “… like Hamlet, golf’s sweet prince.”

To this day, Hagen’s four straight wins in the PGA is the longest consecutive win streak in a major in the modern era.

In 1958 the PGA Championship switched to stroke play, just in time for a big-hitter with a deft putting stroke to join the pro ranks in 1962.

And it didn’t take Nicklaus much time to indelibly make his mark at the PGA, winning the first of his five championships in 1963, joining Hogan, Nelson and Sarazen as the only men to ever win the PGA, the U.S. Open and the Masters. Nicklaus won again in 1971, this time over Billy Casper; in 1973 he won his third, thus eclipsing Bobby Jones’ 43-year-old record of 13 majors; and again in 1975, this time at Firestone. In 1980 he won his record-tying fifth PGA by seven strokes, the largest margin since the championship changed to stroke play. And, to round out his PGA Championship resume, he added four runner-up finishes to firmly establish himself as the top PGA champion of all time.

If he can keep his tee shots down, out of the wind and in the fairway and also putt reasonably well, he has a solid shot. In the past, Woods has exhibited what the great sports writers call “strength of mind” – the ability to clearly set a well-conceived strategy, stick with it and think around the course. All of the great golfers have had it – Hagen, Jones, Nelson, Hogan, Nicklaus. Nicklaus did it over a tough Muirfield setup in heavy winds in his British Open victory in 1966, hitting driver only 17 times over four days. Hogan did it at Carnoustie in 1953, Nelson in his streak of 11 straight wins in 1945 and Jones at St. Andrews in 1930.

Call it mental toughness. Call it patience. Kiawah will require both.

Let’s see if Woods can vault into this rarefied air by equaling Hagen and Nicklaus’ record of five wins in the PGA Championship.

Martin Davis is the golf historian for Golf Channel and has written or edited more than 25 books on golf.