Woods shot a final-round 3-under 69 to earn his 30th career PGA Tour victory and become the first player to win the tournament three years in a row. He finished at 13-under-par 275, four strokes lower than Michael Campbell (71).

'When I was a little boy, I never thought of winning this many times,' said Woods, who is now tied with Leo Diegel for 15th on the all-time PGA Tour victory list. 'I just thought about winning on the PGA Tour and that would suffice.'

More from Tiger on his impressive win.

Campbell double-bogeyed the 17th, but holed out from off the green at 18 to earn his best career PGA Tour finish.

Tiger, who earned $720,000, apparently has an affinity for doing things in threes. He became the first player in tour history to win three different tournaments three consecutive seasons. He added Bay Hill to his three-peats at the WGC-NEC Invitational and the Memorial Tournament. He also won the U.S. Amateur Championship and the U.S. Junior Amateur Championship three times in three years.

Speaking of threes, 14 players were within three shots of Woods 54-hole lead. In that group stood four multiple major winners and three of the top-5 ranked players in the world.

The ultimate score belied a competitive final round. Five players made their ways to double digits under par. But in the end, it came down to two men ' No. 1 and No. 2.

The situation was near identical to that of a year ago: Woods trying to win his first event of the season, with Mickelson trying to play the role of spoiler. The lefthander started last years final round four shots back of Woods and managed to wrest away the lead, before Tiger birdied the 72nd hole to win by one.

This year, playing three groups ahead of the front-runner, Mickelson began his quest for denial three back.

For the second straight day, Woods got off to a sluggish start, bogeying the first hole. Mickelson, on the other hand, birdied Nos. 3 and 4 to tie for the top spot at 9-under. Tiger, though, also birdie the fourth to reclaim his advantage.

Once again, Woods grip on the lead slipped with a bogey at the par-5 sixth. He hit his second shot fat from the fairway bunker and into the lake. He contemplated playing the ball from the water, but, instead, chose to take a drop. He played his fourth shot from 200 yards out, and eventually carded a 6.

While Woods was backing up, Mickelson charged forward and into the lead. He birdied the eighth to climb to 10-under, one clear of Woods.

He then moved two-up with another birdie on the par-4 10th. Woods closed the gap with a birdie at the ninth, and added another at the 10th.

But it was a par save at the eighth that got him going.

'At the time, I'm only one back, and I just wanted to keep myself up on the board,' he said. 'I just felt like I was still in the ball game.'

The seesaw battle continued when Mickelson birdied the par-5 12th. He chunked his chip-shot third, but made the 12-footer to move to minus-12. His reign at the top was again short-lived as the firm, baked-out Bay Hill greens betrayed a precise iron shot to the par-4 14th.

I hit as good a shot as I could at 14, a 6-iron that landed a couple of feet from the hole. A hop or two later and its 30 yards over the green. I dont really know what else I could have done there,' he said.

Mickelson bogeyed the hole, and when Tiger birdied the par-5 12th, the lead was his for good.

Needing a birdie at the par-5 16th - with 17 and 18 virtually outlawing them - Mickelson pulled his tee shot into the right trees. His ball nestled against a twig. Two-hundred yards out, he took a 4-iron and went for the water-guarded green. The ball never found its desired target, plummeting into the pond.

The only shot I felt I had was to go at the green, that was the only opening, right of the trees ' try to put it in the back part of the green, the back bunker, Mickelson said. I had to catch it a little thin to keep it under the branches, and I caught it a little too thin and it went in the water.

Woods added a final birdie at 16 to increase his margin of victory. He played the treacherous back nine in 3-under 33.

'I just tried to hang in there and just give myself a lot of looks at birdies, and tried not to make a bogey on the back nine, especially (on) the last couple of holes.' Woods said. 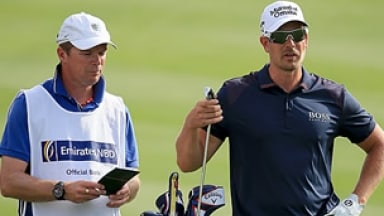 Stenson 'not worried' about slow start in 2014

By GEORGE WHITE
3/24/03 - The words Shock and Awe were mentioned, and for a moment you assumed the subject was Tiger Woods