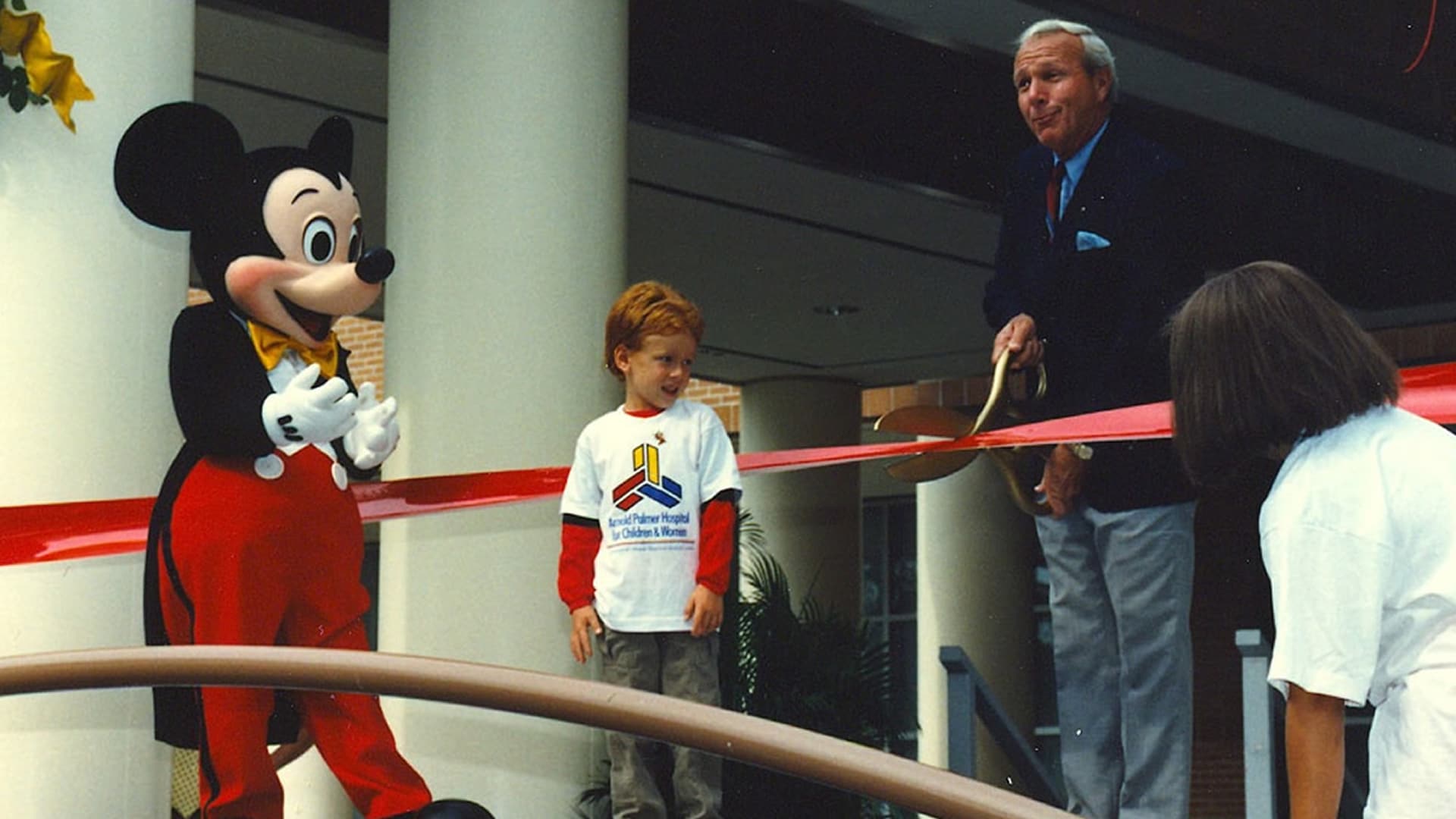 Daniel Whitney is better known by his gregarious professional persona, Larry the Cable Guy. But when something is wrong with your newborn, and doctors offer neither solace nor solution, you’re just Daniel, the worried dad.

Whitney’s son, Wyatt, was born with hip dysplasia in 2006. Daniel asked questions: What’s the best care? What are the long-term effects? How can you help my boy?

He got no definitive answers. But there was one promising directive: Go to Arnold Palmer.

If you’ve got nothing else, it’s good to have a name you can trust.

For all the words used in conjunction with Arnold Palmer, none hold truer than "integrity." The man isn’t just a very famous and very successful golfer; he’s a faithful brand.

In the mid-1980s, Palmer was 20 years removed from his final major victory, a decade distanced from his last PGA Tour win. He was in his mid-50s and looking for a charity to support.

It’s funny the way things turn out. Palmer just wanted a philanthropic association, one in which he could lend financial and intangible support. He ended up creating a secondary legacy that he considers his primary achievement.

“I don’t talk too much about my major accomplishments,” Palmer said. “I like to think that the things I’ve done off the course are how many will remember me.”

When Palmer and his late wife Winnie first visited the children’s hospital in Orlando in 1984, it was just a six-bed unit. Six beds. It was the best they could do.

Then Arnold Palmer got involved.

“He saw how crowded we were, but he saw the future. He saw the potential for success and he said, ‘We will do better,’ And we did do better because a few years later we were moving to the Arnold Palmer Children’s Hospital,” said Dr. Gregor Alexander, a neonatologist. “Without his commitment, without his passion, without the belief that he had in all of us – I’m talking about all the physicians, all the nurses, all the staff – we could not have accomplished what we have done in building two hospitals.”

Today, the children’s hospital is a 158-bed, 362,000-square-foot facility. The adjacent Winnie Palmer hospital, connected to the children’s center by an overhead walkway, houses 225 beds over 400,000 square feet. The medical center is the largest facility dedicated to children and women in the United States.

When Arnold Palmer attaches himself to a project, be it saving lives or quenching thirst, he doesn’t half-ass a thing. He doesn’t lease his name; you get him. You get the man, his ideals, his ethic, his pride, his commitment.

“I told them from the start: we’re going to do this the right way,” Palmer said.

Lives saved at the Arnold Palmer Hospital for Children

A story goes that Palmer’s longtime friend and manager Mark McCormack was once a little short with a server. Palmer pulled him aside and said, according to tour peer Dow Finsterwald, “’If you’re going to represent me I would like you to do it in a very pleasant and friendly manner.’ I think Mark got the message.”

Point being: The name Arnold Palmer, and everything associated with it, be it great works or small gestures, has substance.

That name lent peace to Daniel Whitney. You might not know it by his redneck character but Whitney loves golf. You tell a golf fan Arnold Palmer can help him, he’s gonna go seek such help.

Whitney went to the hospital and met with Dr. Chad Price, an orthopedic surgeon. “He had a confident talk,” Whitney said. “He knew what he was talking about and we could tell we were in the right place. He said he didn’t think we had to have surgery, that we could cure him without it and, by gosh, he did it.”

Wyatt is 8 now, healthy as can be, and his name bears a wing in the International Hip Dysplasia Institute, to which the Whitney family, through their Git-R-Done Foundation, has given $5 million.

Annika Sorenstam shares his sentiment. She gave birth to her second child at 27 weeks at Winnie Palmer.

“Will got off to a tough start in his life, but thanks to the care and thanks to the love and thanks to what they provide at Winnie Palmer Hospital he’s now a (3-year-old), full-of-life boy,” she said. “It’s just a miracle and we thank them pretty much every day for what they’ve done for giving us the hope that he would survive.”

PGA Tour player Brian Davis and his wife, Julie, had two children born at Winnie Palmer. Their son, Henry, was born with kidney problems. Their daughter, Madeline, suffered two collapsed lungs. Both are in good health now but Brian often wondered, while they were being treated, if his family was receiving special service because he was a professional golfer. That quickly subsided.

“I spent a lot of time in this hospital, seeing how they dealt with everybody coming into the hospital, other families, other children. We got to meet a lot of parents in the waiting rooms, the extra places for the kids to play and stuff like that and I was amazed how good the care is for everyone across the board,” Davis said. “I think it’s just such an achievement for Mr. Palmer.”

“Every single patient – every single baby, every single child, every single mother has been taken care of like they would be the only patient that we’re caring for,” Dr. Alexander said. “They are being cared for like they are a part of our family. It’s not just a job; it’s a mission. No matter how busy we are and how many patients we have, we’ll always give each baby, each child and each mother a specific treatment that they need with a lot of caring and compassion.”

Brandon Brown was a track star who broke his ankle so severely that doctors in Michigan wanted to amputate his leg. Shannon Smowton was near death after contracting E. Coli at a petting farm in Florida. Trinity Simmons was born prematurely, at 2 pounds, in a foreign country.

Kids of different ages in different circumstances, all in need of the same thing: a medical miracle.

Arnold Palmer, for all the jokes about Jesus and a 1-iron, is not a savior. But he helped establish the foundation and lay down the principles for two entities that come as close to producing divine acts as we can comprehend.

What is a miracle, but an extraordinary event that is believed – or feared – to be impossible? The healing of an ailing child, to which every parent will attest, is a miraculous occasion.

Palmer has borne witness. He visits the hospital. He meets the families. This is personal for him.

For Palmer, it was about this: “The Winnie Palmer Hospital for Women & Babies is great and last year we had 13,000 kids born in that hospital and it gets more substantial every year. We are directly responsible for heart transplants, liver transplants, we do everything in the medical field for children and women, and it has been very successful. We’ll continue to grow it as time goes on, but we’re very pleased with what happening there.”