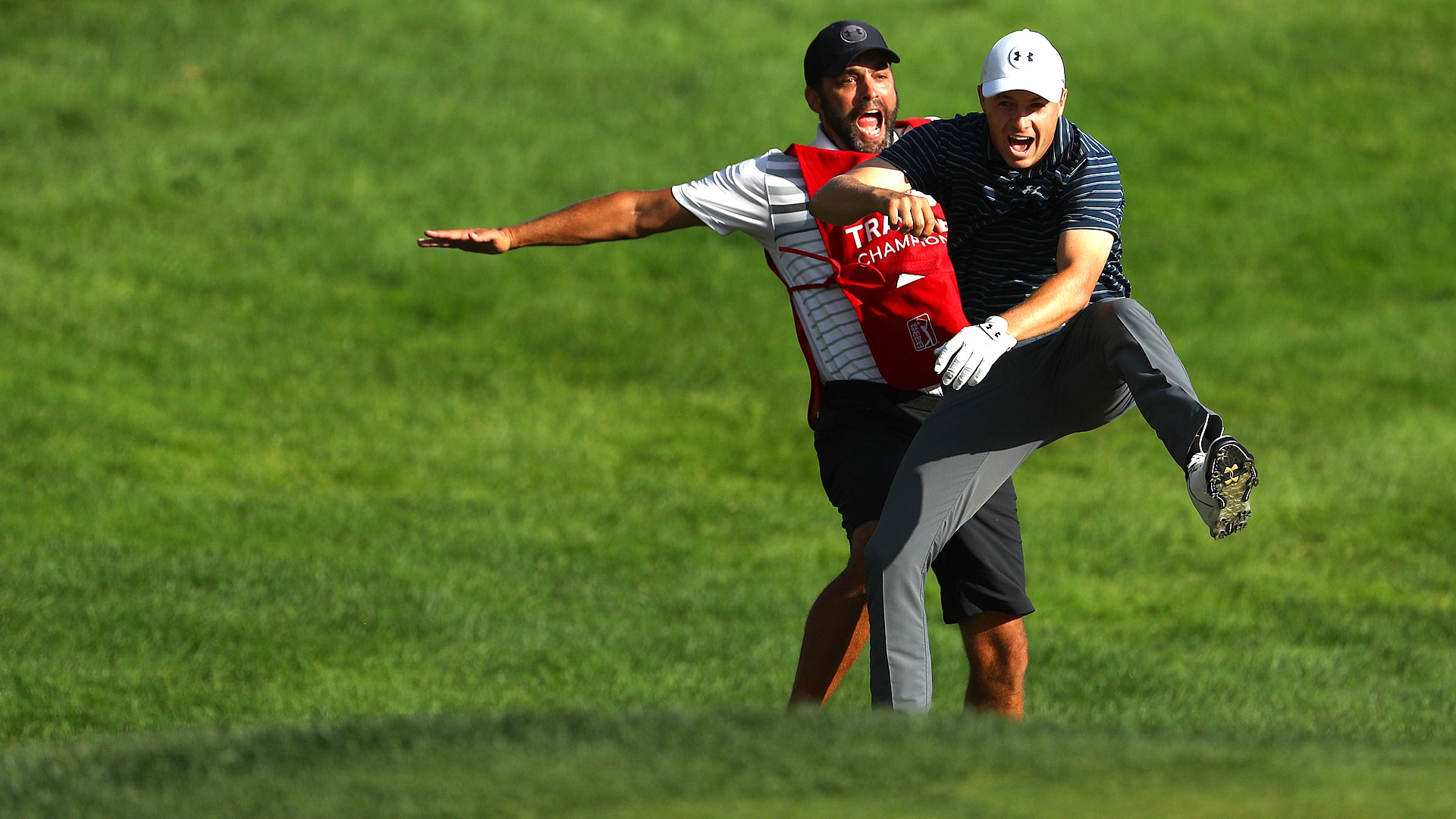 How one swing can change the narrative. By sinking his bunker shot on the first playoff hole at the Travelers Championship, Jordan Spieth revived Tiger Woods comparisons and reminded people of how much he’s accomplished in a short period of time.

But, boy, that Sunday evening news conference could have been much different.

A shaky putter, the inability to pull away from a field that wasn’t pressuring you, dumping a sand wedge in the bunker on the 72nd hole, that drive on the 73rd. You wouldn’t need to pick one, because they all would have been topics of conversation.

Instead, the focus is on Spieth’s “clutch gene” and Tiger-esque dramatics. And well it should be. Those other issues may rear their heads down the line, but for now, Spieth did what was necessary to win and did it with flair.

1. There’s plenty to dive into with Spieth’s win, but let’s start with the best part: The bunker hole-out. Spieth not only produced the shot, but he gave it the reaction it deserved. And give CBS credit for delivering the multiple angles. Here are a few:

If there was ever a time for an epic *club launch*! #TravelersChamp pic.twitter.com/Icb2MkOO6b

2. We’re jaded. It’s not our fault; it’s Tiger’s. But stop and think about what Spieth has done before the age of 24, in a very competitive generation:

3. You have to take the good with the bad, it’s a fact of life. Spieth – like Tiger – is emotional. He’s going to seem petulant at times and he’s going to give you goose bumps at others. That’s who he is and it’s much better than someone who is stuck in the middle. It’s also worked out pretty well for him.

4. So, should Spieth be more apprehensive than elated? The guy above thinks there is cause for concern. So does the guy below:

Doesn't get better than this, but does he lose confidence even though he won?? Can he trust his putter next time he's in the hunt? https://t.co/AZBCKItW3A

When Rickie Fowler stumbled home but still won the Honda Classic in March, many wondered the same thing. He’s since earned three top-5 finishes and contended in the Masters and U.S. Open. But, in both, he struggled on Sunday. Hopefully Spieth’s in position after 54 holes of The Open to put his game to the test.

Majors are nice, but not everything. Better crowds & better drama @ Travelers than U.S. Open. Spieth grows the legend. That was Tiger-like.

6. “Jordan does Jordan things.” No one knows that better than Spieth’s contemporaries. Take this tweet, for example, sent out a few minutes before prediction came to fruition:

Wouldn't be surprised if @JordanSpieth just holed this bunker shot

Credit to Daniel Berger for the way in which he handled defeat. He’s now 10th on the money list, 18th in the world and fourth on the Presidents Cup list

Hopefully the next time @JordanSpieth does that I'm on his team and I can chest bump him too !!

7. Rory McIlroy’s closing 64 wasn’t good enough to sneak into the top 10 at the Travelers, but it could be the start of something big. Using his third different putter of the week, McIlroy made seven birdies to only one bogey. And while he still took 30 putts, it should also be noted that he hit 12 of 14 fairways and 17 of 18 greens in regulation on Sunday. McIlroy is off this week but playing the Irish Open and Scottish Open, ahead of The Open at Birkdale. That gives him a few more rounds to settle on a putter before the season’s third major.

8. Phil Mickelson and Jim Mackay announced the dissolution of their work marriage this past week. Men cried. Women wailed. A nation mourned. And we all questioned, why? Was it something we did? Is it irrevocable? If they can’t make it together forever, who among us has a chance?

Overkill? A smidge. But this story had the proper mix for an emotional cocktail: surprise, nostalgia, intrigue. And golf Twitter – accustomed to languishing in the weekly doldrums – drank it up like Fireball from a major trophy.

There were 140-character hot takes and thousand-word retrospectives. So many opinions to share – they must be heard! – and since everyone follows everyone else, we saw them all. What’s the lesson to be learned from the Phil-Bones split? That all good things must come to an end? No. It’s pare down your social media following. You’re not going to miss anything.

9. There remains the question, why? Was it a single back-breaking straw? A boss’s desire for something fresh in a fading career? A pair of bad knees that just couldn’t take it anymore? Mickelson was on “Morning Drive” on Monday and made it seem like it wasn’t a health issue for Bones, who had double knee replacement late last year. “We just could tell that it was time,” Mickelson said. “We just needed a little bit of change in environment to do something different.” Even if Mickelson and Mackay never provide full disclosure, golf Twitter will speculate until we form our own truth.

10. Anything Ariya can do, Ryu can do better? Two weeks after Ariya Jutanugarn won on the LPGA to vault to world No. 1, So Yeon Ryu did the same at the Walmart NW Arkansas Championship. Ryu held on to defeat Ariya’s sister, Moriya, and Amy Yang by two. It’s her second victory of the year. In case you forgot, she won the ANA Inspiration in a playoff over Lexi Thompson.

There is a scene in “Blazing Saddles” in which Harriett Johnson reads aloud – very aloud – a letter from the Rock Ridge collective to Gov. William J. Lepetomane. The particulars are different, but, in relation to President Donald Trump driving his cart across a green, the kicker is the same.

Get better, Tiger: Tiger Woods announced last Monday that he was "currently receiving professional help to manage my medications and the ways that I deal with back pain and a sleep disorder." He will not be on hand for this week's Quicken Loans National, which benefits his foundaiton.

That guy from Tiger's ace?: Yep, that's him. Omar Uresti, who couldn't properly high-five Tiger Woods after he made a hole-in-one in Phoenix in 1997, won the PGA Professional Championship, which didn't go over well with all.

Must be the new blood in office: The PGA Tour announced that it will begin, starting next season, blood testing and public disclosure of suspensions for recreational drug violations. Welcome to the 21st century.

Blown Fantasy Pick of the Week: Justin Thomas. There was reason for optimism, after he tied for third last year in Hartford, but Thomas ran out of gas and missed the cut (73-72) after his record-setting U.S. Open performance. Sigh.