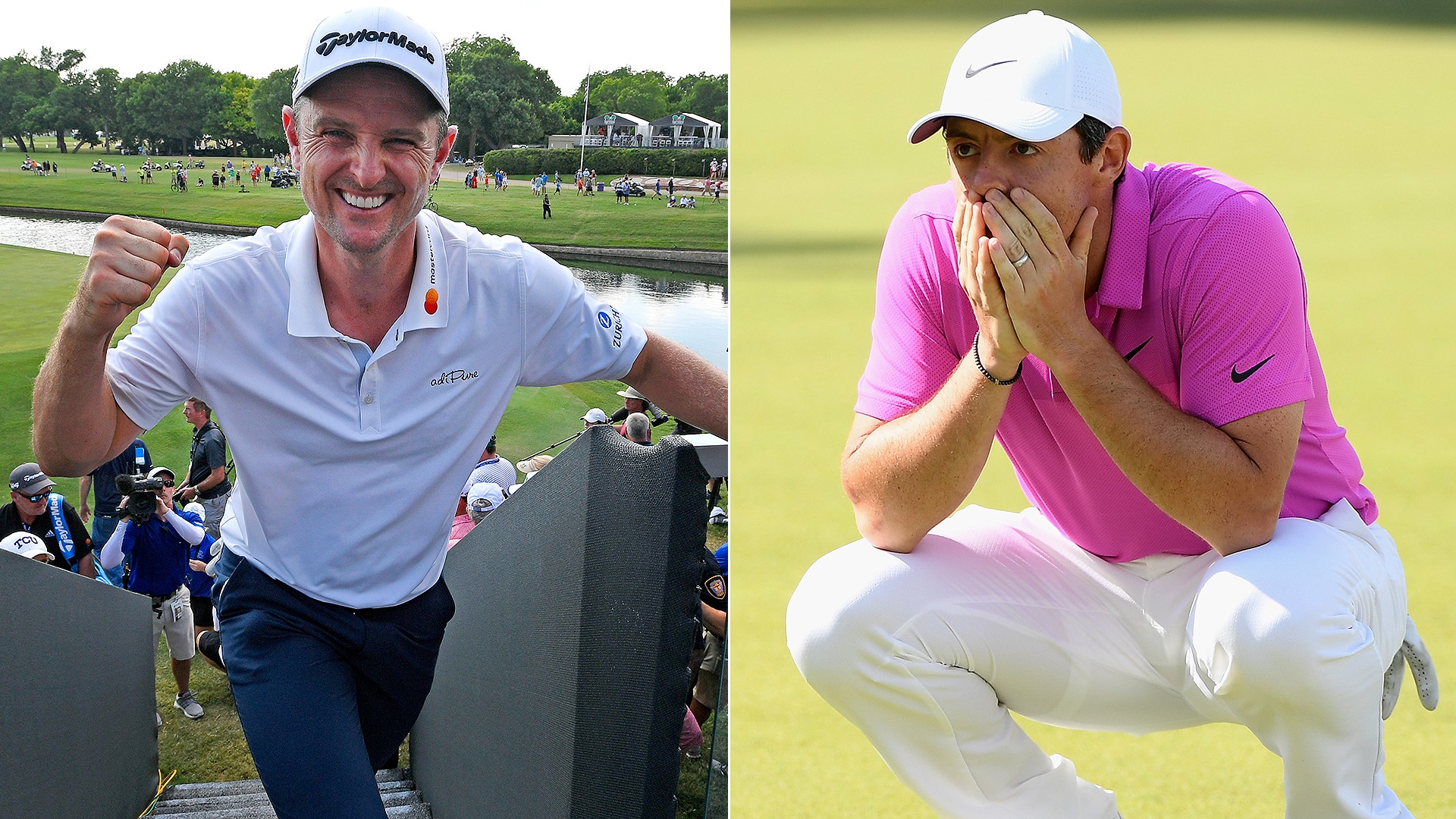 Justin Rose takes down another classic venue. Rory McIlroy blows another chance to win. And we've got a monster week ahead in the golf world. All that and more in this week's edition of Monday Scramble.

Justin Rose is a big game hunter. Take a look at some of courses he's bagged as part of his nine PGA Tour victories: Muirfield Village, Aronimink, Cog Hill, Doral, Merion, Congressional and now Colonial. He's also won an additional seven events on the European Tour (on courses including Valderrama and Royal Aberdeen) and a gold medal at the 2016 Olympic Games.

So, is that a Hall of Fame resume? Well, golf writers no longer have an official say. That will ultimately be up to a 16-member selection committee. Said committee is going to have to make some tough decisions down the line. Just taking into consider what they've done to this point in their careers, there are some legitimate borderline contenders. Among the more established one-major winners: Rose, Sergio Garcia, Dustin Johnson, Henrik Stenson, Jim Furyk and Adam Scott. Among the multiple major champs: Bubba Watson, Martin Kaymer and Zach Johnson.

Speaking specifically of Rose, you have to take into strong consideration the caliber of venues at which he's won. And while the field in Rio a few years ago wasn't major-caliber, winning gold may prove to be the defining moment of his career.

Hall of Fame? We'll see how high the committee's standards are.

1. Over the last decade at Colonial Country Club, everything from 9 under par to 21 under par has proved victorious. This year it was closer, much closer, to the latter. Rose made 25 birdies and five bogeys for a 20-under total. Had he not bogeyed the 72nd hole, he would have tied the tournament scoring record. Five of the last six events, including the Zurich team competition, have been won at 17 under or lower. For those of you who prefer higher scores, fear not. The U.S. Open is in a few weeks and the average winning score of its predecessor, the FedEx St. Jude Classic, over the eight years is 11 under. Only one player in the last decade has shot lower than 16 under at the Memorial Tournament (this week's event). That, however, would be Rose (18 under, 2010).

2. Second sucks. Brooks Koepka concurs with Tiger Woods. Koepka earned his sixth runner-up finish since May 2016, finishing three shots behind Rose in Fort Worth. Koepka wasn't quite as abrasive as Woods was in the late-90s, just referring to the close calls as "annoying." He does, however, have a U.S. Open victory - and a win in the Dunlop Phoenix - during that stretch. Given his good form, he could become the first player since Curtis Strange, in 1989, to defend his national championship title.

3. Kevin Na opened in 62 and closed in 61, and finished six shots back of Rose. Middle rounds of 73-70 at par-70 Colonial cost him any chance of a second PGA Tour title. That's now one career victory in 367 Tour starts. At least he has nearly $26 million in earnings to comfort him.

4. Before we leave Colonial, let's remember ... we don't have to. Thanks to Charles Schwab and Co., stepping in as sponsor, beginning next year, this event - and this venue - will remain on the Tour schedule for the foreseeable future.

5. And, before we get dive into what McIlroy didn't do at the BMW PGA Championship, let's pay off the man who got the job done. Francesco Molinari earned the biggest victory of his career by beating McIlroy head-to-head on Sunday at Wentworth Club. The two began the final round tied for the lead. Molinari closed in 68, McIlroy in 70. The 35-year-old Italian played his final 44 holes bogey-free and only made two all week to capture the European Tour's version of The Players. It's Molinari's fifth career European Tour win.

6. McIlroy could have five wins this season. Alas, he has but one (Arnold Palmer Invitational). McIlroy was once again in prime position to add to his trophy case. He played so well through two rounds that defending champion and playing competitor Alex Noren joked about quitting the game. But Saturday was erratic and Sunday was unproductive, and, in the end, he was left with a solo second-place finish. "I should have closed it out," he said. Just as he should have done at the Masters, and in Dubai, and in Abu Dhabi.

7. European Ryder Cup captain Thomas Bjorn began last week by naming Padraig Harrington, Luke Donald, Lee Westwood and Graeme McDowell as his assistants. But he had to be even happier with the way the week ended. Rose won on the PGA Tour. Molinari emerged on the European Tour. And McIlroy is thisclose to being dominant Rory again. Molinari was on the victorious 2010 and 2012 European teams. His half-point against Tiger Woods in singles in '12 helped the away team complete the Miracle at Medinah.

8. Did someone say Tiger Woods? He's in action this week at the Memorial Tournament. Given his history at this event (five wins) and his impressive weekend showing in his most recent start (The Players), the expectations will be high at Muirfield Village. But when aren't they? Tiger will get the lion's share of attention, but the field also includes McIlroy, Rose, Justin Thomas, Patrick Reed, Dustin Johnson, Jordan Spieth, Phil Mickelson and Rickie Fowler. And, of course, host Jack Nicklaus will hold court in the media center. Expect lots of good headlines.

9. The women, meanwhile, will be competing in the U.S. Women's Open at Shoal Creek ... weather permitting. Mother Nature has not been kind to the LPGA this year and with Subtropical Storm Alberto moving through the Gulf of Mexico and into Alabama, it's going to be another rainy occasion.

This section is usually reserved for something wacky that happened in the past seven days. But this week we spotlight the heroics of Jason Seaman, a 29-year-old science instructor and seventh grade football coach at Noblesville West Middle School in Indiana. Seaman took three bullets in helping stop a school shooting. Seaman survived.

Golf Channel insider Tim Rosaforte reported that Seaman's aunt, Tracy Hubly, was serving as caddie for her husband, Chris Starkjohann, at the KitchenAid Senior PGA Championship. Said Hubly, "You hear the stories about these shootings and I think about Parkland and the officer that was trained but didn’t go into the school. It’s really shocking to think it comes close to your family, but it does."

Another school shooting. What the hell?

Happy birthday to Minjee: Minjee Lee birdied the final hole for a one-stroke win at the LPGA Volvik Championship. She turned 22 on Sunday and collected her fourth career tour victory, at an event in which she finished runner-up a year ago.

Hale(y) to the victors!: The University of Arizona won the NCAA Women's DI Championship when Haley Moore made birdie in a sudden-death playoff to give the Wildcats a 3-2 victory over Alabama in the finals. Arizona needed an eagle by Bianca Pagdanganan and then a playoff win over Baylor just to make the match-play field. Now, they are a three-time national champion.

Live up to that, fellas: The man now take the stage at Karsten Creek. You can watch the action live on Golf Channel: 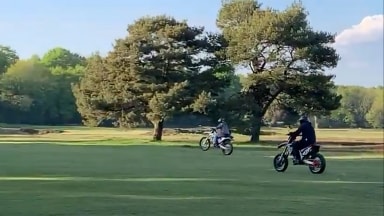