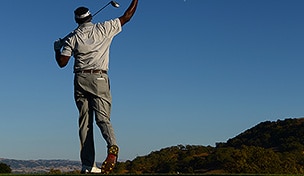 Getty Images
GULLANE, SCOTLAND - JULY 17: Fred Couples of the United States stands with Nadine Moze ahead of the 142nd Open Championship at Muirfield on July 17, 2013 in Gullane, Scotland. (Photo by Andrew Redington/Getty Images)  -

SAN MARTIN, Calif. – The wraparound season’s not so bad. Some people are treating it like New Coke, but, really, does it matter if players are competing to keep their current cards or get a jump on a future one?

Expectations are key to acceptance. If you thought changing October events from enders to beginners would attract bigger names, then you’re bound for disappointment. There will be no Tiger Woods, but as he says, it is what it is.

These tournaments are what they are. Classify them how you want, but these events are ones which offer the best opportunity for players to maintain/gain their Tour livelihood. This past week, for example, had no player inside the top 25 in the world golf ranking, but offered full FedEx Cup points, a $5 million purse, a two-year Tour exemption (as well for the remainder of this year), and a trip to the 2014 Masters.

One might say, ‘Well, that’s the point. All that is on offer and the field is weak.’ Consider the alternatives.

If these were the old Fall Series events, purses would be smaller, there would be no golden ticket to Augusta and the fields would be the same.  Would you rather have silly season events? Did you really enjoy watching Fred Funk dress as a woman or Stephen Ames battle K.J. Choi?

The handful of superstars in the sport aren’t playing those hit-and-giggle tournaments, either. They’re going overseas for straight cash, homey. And they are going to do that regardless of whether the Tour is wrapping up its season or wrapping around its season, or if there are skins games or shootouts.

You can watch Tiger Woods and Rory McIlroy in places like China and Turkey, not Sea Island, Ga. and Naples, Fla. And, aside from a planned trip to the WGC-HSBC Champions, Phil Mickelson’s not playing anywhere but at his house with his kids.

The European Tour did a wraparound schedule for more than a decade, before instilling an offseason in 2012. The PGA Tour does have a break this year. After the Mayakoba event concludes Nov. 17, there is only the World Cup, Tiger’s event and the Franklin Templeton shootout on its unofficial schedule. There is plenty of time for players to recharge and fans to miss the sport

And, speaking as person who works for a 24/7/365 golf network, extended offseasons are not a good option.

Entering the final round of the first event to the 2013-14 season, Brooks Koepka led George McNeill and Jason Kokrak by two shots. Jimmy Walker, Robert Garrigus, Will MacKenzie, Ben Martin and Jim Herman were among those in the top 10.

Who wants to watch that? Hard-core golf fans.

This time of year isn’t meant for the casual fan. They have college and NFL football, and baseball playoffs to watch. They have fantasy football teams to manage. October is for the person who wants to watch golf because he or she loves golf. And as a person who loves golf, I’d rather watch players grinding for something meaningful than a bunch of semi-stars earning more NetJets dollars while goofing around.

Jimmy Walker won this year’s Frys.com Open. Tell me the difference. The quality of field is similar, the quality of champion is similar. That’s the way it is this time of year on the PGA Tour. Coming off a string of FedEx Cup tournaments and cup matches, and when No. 82 on the money list makes over $1 million, the Tour can’t entice big name players to play its events late in the year.

Viewers and readers constantly whine and moan that there isn’t enough coverage of regular Tour members and fresh faces. Well, here you go. This is your time of year. Enjoy this new wraparound season for what it’s worth, because – unlike other options – it’s worth something.