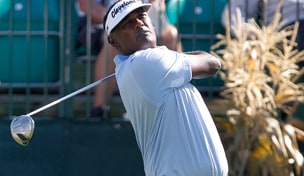 He’s not leading the tournament entering the final round, but he’s close. Following a Saturday 65, he’s three shots behind leader Brooks Koepka, who shot 67 in Round 3 to reach 15 under.

“The goal was to get to 12 under. Had a shaky start there, but played well in the middle,” Singh said. “If I putt well, I’m going to score well.”

Singh had one eagle, five birdies and one bogey in the third round at CordeValle Golf Club. His eagle came at the par-4 17th, when he nearly made a hole-in-one. Singh’s drive came to rest 1 foot 4 inches from the cup.

That got him within one of the lead at the time and had media folk wondering: Will he talk?

And so it was, at 5:08 p.m. PT, Singh spoke on the record to a small group of reporters. For the first time since Oct. 13, 2012, at this event, there was a Tour transcript of a Singh conversation.

A quick timeline of events:

• 5 p.m.: After he just misses a 27-foot birdie putt, fans give him an enthusiastic applause.

• 5:04 p.m.: Singh enters the scoring trailer. PGA Tour media official John Bush hopes to get Singh to do a live Golf Channel sit-down with Todd Lewis, an XM Radio interview and a media scrum. Singh agrees to the scrum and Lewis.

• 5:08 p.m.: Singh speaks to two writers, one Golf Channel producer and one radio reporter for two minutes and 13 seconds. No one brings up his lawsuit against the PGA Tour. No one wants to send him scurrying. Or get pummeled.

• 5:14 p.m.: Singh leaves Lewis and goes to sign autographs. He doesn’t engage much with fans, just saying “thank you” when they complement and encourage him. But he signs for most everyone and even poses for a few photos.

He was almost … pleasant. It certainly helps when you’ve just put yourself in contention to win your first Tour title since 2008, and the 35th in your Hall of Fame career.

“I’m not in the lead, so coming from behind is much easier than being in the lead,” he said. “(I) haven’t won for a long time, but I feel good. If I keep playing well, there is not much nerves. (I'm) striking the ball good and driving the ball really well and the putts have gone in, so it’s a good feeling.”

Asking Singh a question is like talking to a unicorn. You knew they existed but you didn’t know they could speak.

The reason such a minor thing is news-making –  if you missed the entire 2013 season – is because of Singh’s lawsuit. He is suing the PGA Tour for “violating its duty of care and good faith.” In January of this year, Singh was quoted in a Sports Illustrated article as using deer-antler spray, which contains IGF-1. The chemical was banned by the World Anti-Doping Agency, by which the Tour models its anti-doping policy.

The Tour treated Singh’s quotes as an admission of guilt and suspended him for 90 days. Singh appealed. WADA later reviewed IGF-1 and took it off its list of banned substance. The Tour dropped its case against Singh on April 30. Singh filed suit nine days later for defamation.

And here we are, suit still lingering, Singh back contending. It’s been awhile since he was in this position. His last top 10 on Tour came last year at CordeValle; though, he did tie for sixth in his Champions Tour debut last month.

Lewis, who has a good working relationship with Singh, asked him if all the hubbub had been a distraction to him. Singh did not ignore the question.

“Personally, yes. Professionally, bigger yes. It kind of messed up my whole season,” he said. “I’m re-energizing. Still not over it yet, but focused on my game.”

Will Singh win again? Will he speak again? The answers may be one day away.