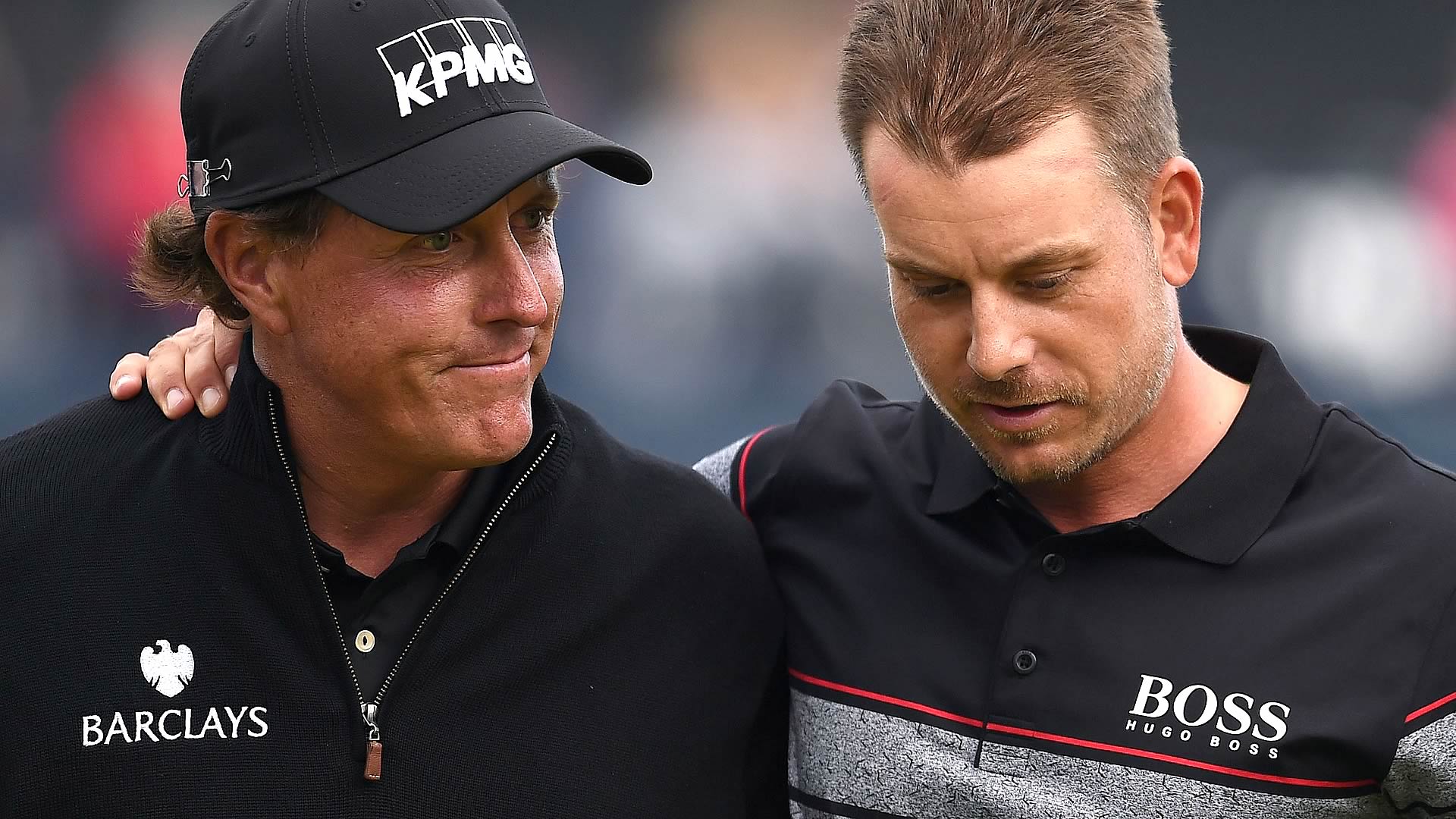 TROON, Scotland – The final round of the 145th Open is better described in feelings than in words.

You must have watched it. It had to be seen, to be felt.

Those times where you leaned forward in anticipation and fell backwards in disbelief. When you placed your hands on your head in amazement. The monosyllabic yells and groans, as if you were there.

They’ll call this one epic. The Epic Open. Maybe they’ll come up with a better name, but not one more appropriate.

This one began with a remarkable 63 and concluded with the same. It developed into a two-man race, a pair of 40-somethings, both supreme talents but one with a resume far exceeding the other.

There was something lacking for Henrik Stenson and it was obvious. For him to obtain it, all he had to do was defeat a Hall of Fame player with five major titles in a head-to-head duel at Royal Troon. Simple enough.

Did you see what Phil Mickelson did first thing on Sunday? Confidently striding to the first tee, kissing his hand and touching the claret jug’s glass encasement. That felt … odd. Didn’t really work out for Yani Tseng when she tried something similar a few years ago. But this is Phil, so out-of-the-ordinary is quite normal.

What a beginning it was. Mickelson stuffing his approach shot and making birdie. Stenson three-putting for bogey. Two-shot swing in one hole and here we go! No time to settle in – you’ve had hours of lead-in coverage to get comfortable – the emotions are kicked into high gear at the start.

This wasn’t just anyone turning a deficit into an advantage instantly. This was Phil Mickelson, the most entertaining, fan-appreciated player since Arnold Palmer. The who mattered as much as the what and the how this Sunday. Pick any other name off the big yellow scoreboard and it’s just not the same.

Mickelson hit 64 percent of his fairways in the final round. He hit 78 percent of his greens in regulation. He took only 28 putts. He shot 6-under 65 and didn’t make a bogey. And he lost. By three.

You wondered if Stenson would waver. Would the early gut-punch send him wobbling and into the recesses of his mind where he sometimes gets frustratingly lost, like a driver who keeps returning to a destination he doesn’t want to be.

He’s been here before. Not exactly here, but near enough. Stenson has had his chances to win major titles and, obviously, never has. Had.

Mickelson hit a long-iron to 8 feet and made eagle at the par-5 fourth. We’re tied again.

These four holes were the first three rounds of Marvin Hagler-Thomas Hearns. Without the cut over Hagler’s eye, Hearns’ baby deer legs and actual violence. That one never made it to a fourth. We still had 14 more to go here.

Finally, a bit of separation. Stenson birdied the par-3 eighth, the Postage Stamp, from 12 feet. It’s the littlest fella in the Open rota, but a hole that has caused players fits this week. Matt Kuchar made 7 there earlier in the day. But not Stenson. He made 2.

Both men turned in 4-under 32. Stenson maintained his one-stroke lead. He stood at 16 under, Mickelson at 15.

Something had to give. Someone had to make a mistake. This couldn’t continue.

It was going to happen on the back nine. You could feel it.

And then both men birdied the 10th. We were entering Jack Nicklaus-Tom Watson-Turnberry territory now.

“This was another duel like Jack and Tom,” three-time Open winner Nick Faldo would later say. “But they took it up a couple notches with the scoring; that was crazy, the quality of the golf and the quality of the putts, it was amazing.”

Mickelson would reference the Duel in the Sun in the media center Sunday night: "I certainly was thinking about that. I know that I wanted to be more of Tom in that case than Jack, but unfortunately - I understand how it feels. It's bittersweet, I guess."

There was a slip at the 11th. Stenson three-putted again for bogey. It was one of only two dropped shots, by either man, on the day.

For all of the scoring – 14 birdies and one eagle between them – there was one amazing par that gave Phil and his fans a jolt. On Saturday, Mickelson saved par at the 12th from the gorse. On Sunday, he twice played from the rough and had in excess of 20 feet to remain tied with Stenson.

That eruption. You could feel the energy of that crowd. Even watching alone, however many miles away, you were right there with them.

After a pair of pars on the 13th, there came a two-hole stretch that will forever define Stenson’s career. First he made an 18-foot birdie at the par-3 14th to regain a one-stroke lead. That was impressive. What he did next was legendary.

No way he makes this. It’s 50 feet, at least. Phil’s a good 30 feet away. Stenson pars, Mickelson pars, we go to the final three-hole stretch separated by one.

But damned if Stenson didn’t.

What that must have felt like. He hits the putt and starts walking. There’s a lot of distance for that ball to cover. And when it drops so, too, does Stenson’s right arm, a fist pump captured by cameras, the forever imprint of the 145th Open.

No words can do it just.

From there it seemed a formality. Up two with three to play. Not insurmountable, but, c’mon, have you been watching Stenson play? Mickelson was going to have to do something special. And, he nearly did.

Mickelson hit the green in two on the par-5 16th. Stenson hooked his approach shot into some nasty knee-high weeds. But Stenson did as Stenson was doing and got up and down for birdie. Mickelson had to convert his eagle. He couldn’t. You could sympathize as his ball trickled off the edge of the hole. The anguish in his 46-year-old face, empathic.

“I really thought that was going to go in,” Mickelson said.

Stenson, 40, had a shot at becoming the first man to shoot 62 in a major, something Mickelson just missed in the first round. He needed to birdie his final two holes to do so, but clipped the left side of the hole on his 8-foot birdie effort at the par-3 17th.

A two-stroke differential at the last, there was still a chance for Mickelson. He would need a birdie and some help. But help? No, there was none when Phil went searching for history on Thursday and none when he endeavored for his sixth major title on Sunday.

Stenson’s tee shot, heading right for a bunker and a sure layup thereafter, stopped. It stopped.

Stenson knocked his approach shot onto the green and then, because what would be more appropriate, he made the 20-footer for birdie to finish at an Open-record 20 under par.

Mickelson, terribly disappointed, embraced his opponent. Congratulated him. He took the loss as he’s taken many major defeats before, with professionalism and respect.

“It's probably the best I've played and not won,” Mickelson said. “I think that's probably why it's disappointing in that I don't have a point where I can look back and say, I should have done that or had I only done this. I played a bogey-free round of 65 on the final round of a major, usually that's good enough to do it, and I got beat.”

He had his place in history.

The normally charismatic, funny and fiery Swede was at a loss for words. If Mickelson was confused at how he could lose, Stenson was equally dazed by his accomplishment.