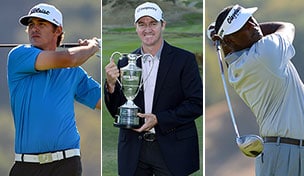 SAN MARTIN, Calif. – Some events are as much about who doesn’t win as who does. The Frys.com Open qualifies as such.

The tournament epitaph will read: Jimmy Walker won here. It could add, in parentheses, Brooks Koepka and Vijay Singh did not.

This was Walker’s first career PGA Tour victory, in his ninth full season. Lucky No. 188.

He earned it, too. The 34-year-old shot 5-under 66 Sunday to defeat Singh by two strokes. His round included six birdies and one bogey, and aside from a 9-foot miss for birdie at the par-4 17th, which would have sealed victory, he was rock solid. He can also say he beat a Hall of Famer.

“When you think about all the things he’s done and all the wins he’s had, it was a pretty good day,” Walker said.

Count Walker among those who believe the wraparound calendar is a good idea. He had his best season in 2013 with five top-10 finishes, including a tie for second at The Greenbrier Classic. He finished 36th in the FedEx Cup standings and made more than $2.1 million.

That yearly total is now over $3 million thanks to the $900K first prize. He also earned what is essentially a three-year Tour exemption, through the 2015-16 season (if we’re still wrapping around in the future).

“When you don’t win and you don’t rack up the two- or three-year exemption, you always start your year off going, 'I’m at ground zero. I got to start at the bottom and go get it,'” Walker said.

“I had always wondered, will it change the way you think about things if you win? But I want to stay hungry.”

This tournament, however, featured an ensemble cast. Walker ended with top billing, but most of those watching came to see Singh and Koepka – two men who couldn’t be more dissimilar.

Singh’s a 50-year-old Fijian whose previous start came last month in his Champions Tour debut. He’s won 34 PGA Tour titles and is enshrined among golf’s all-time greats. Koepka is a 23-year-old Floridian who was making his first start in a regular Tour event. He’s a four-time winner … on the European Challenge Tour.

About the only thing they have in common is their passport history.

Koepka has played in 15 countries this year. Looking for a few more Stateside opportunities, he led by two strokes after 54 holes and four shots through six holes on Sunday. Though 18, however, he was three in arrears. The product of a closing 1-over 72 and a bit of nerves over some short putts.

Koepka describes his demeanor as “chill.” But he came unnerved a bit attempting a 3-foot par putt at the par-5 ninth. He missed. He then missed a 5-footer for par at the 11th.

“You know, certain parts of my game I need to work on. These 5-footers under pressure, I think all of them were missed left,” he said. “Learn from it and move on and everything should be OK.”

One back of Walker on the par-3 16th, Koepka badly pulled his tee shot. He failed to get up and down and made bogey. He bogeyed the par-4 17th as well when he hit a 3-wood into the water while trying to drive the 297-yard hole.

“You know, things weren’t going my way. I didn’t execute the shots. We were making the right decisions, playing well,” Koepka said. “I just didn’t make the shots I needed to win.”

Singh’s day was ultimately undone in a two-hole stretch. Bogeys at Nos. 7 and 8 dropped him five off the pace at the time and he was unable to make up that much ground. He still left with a smile on his face, a positive attitude and a few words. Yes, that Vijay Singh.

“I hung in there. Had a lot of good shots, and really, really happy with the way I putted,” Singh said. “So it’s a good start for the season, and I’m really excited.”

Who knew Vijay was an optimist? Maybe he’s more like Koepka than we thought, so chill.

Singh, Koepka and Walker are headed to Las Vegas now, where they’ll try to headline another show at the Shriners Hospitals Open. Koepka is in thanks to his top 10 this week. Another good week and he could get his Tour card based on the non-exempt money list.

Singh said he’s been working on a slight change in his swing and with the way he’s putting, he sounded downright giddy Sunday evening. “It’s a great feeling,” he said.

As for Walker … well, he doesn’t seem to get too excited. There wasn’t much reaction after he secured his maiden win and there wasn’t much emotion in his voice when he spoke about it. He may be drier than a cracker, but, in his own way, he expressed its significance.

“This game is tough. It’ll beat you up. You can’t keep thinking about what could’ve been. You can only learn from it and keep going. That’s what I try to do, just try to keep getting better,” Walker said.

And then there’s Koepka. The man who's played everywhere from Tallahassee, Fla., to Ahmedabad, India. This week was just one more new endeavor, a chance to learn and mature.

“This whole experience is kind of new,” Koepka said. “Everything in the last year has been a bit crazy.”

“It was a good week, if you take it overall. It was very good. I played very well, so I just can’t get too down on it. Tied for third isn’t too bad. Just move on.

“And the end of the day, it’s just golf. Things could be a lot worse.”