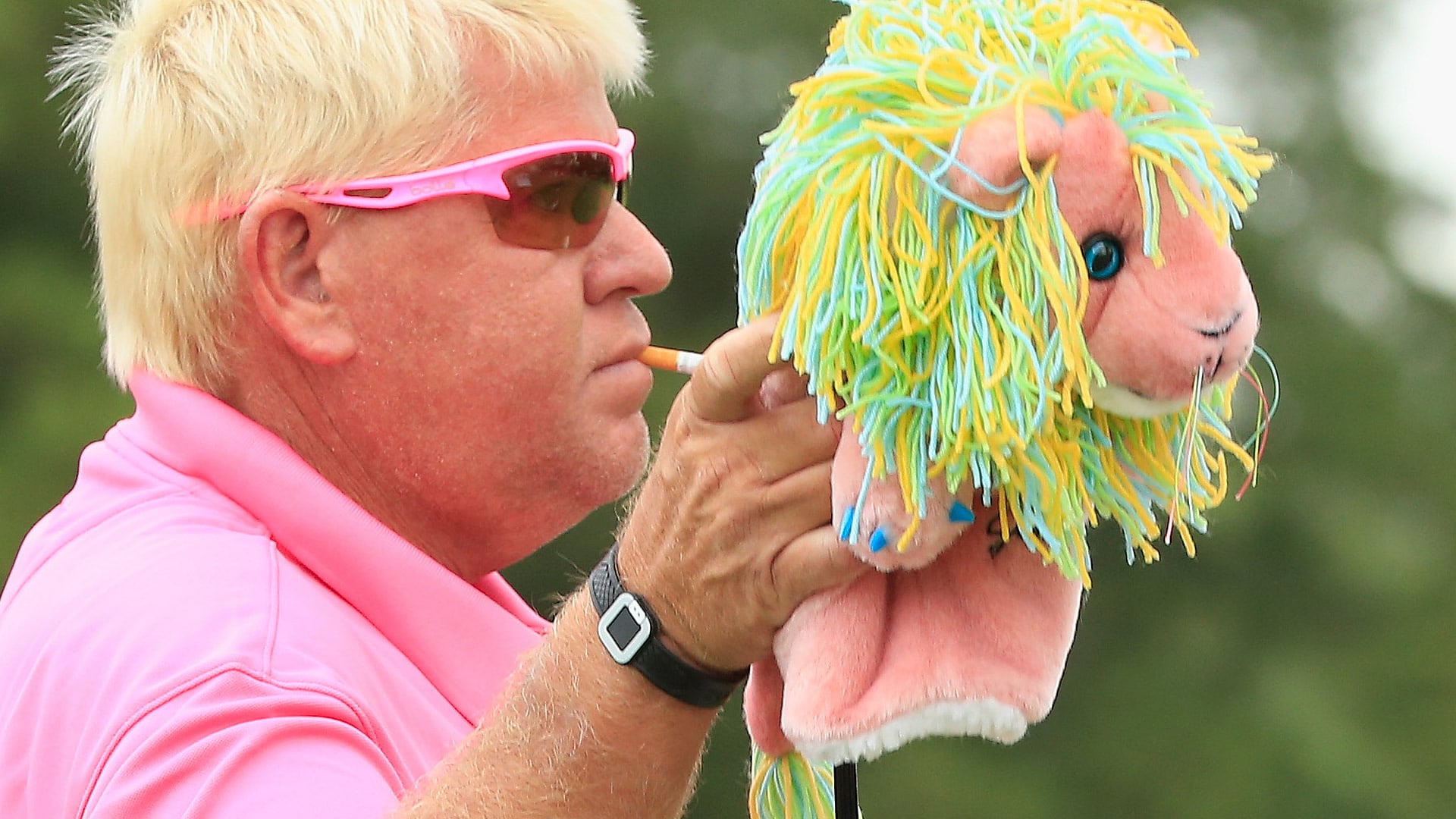 THE WOODLANDS, Texas – Amid a stiffening wind and under ever-darkening clouds, John Daly made his way around the U-shaped fence surrounding the scoring area at The Woodlands Country Club.

One by one, he signed autographs and was peppered with encouragement. Some seeking his signature likely had no idea he had just triple-bogeyed the 17th hole.

“Thanks for coming out.”

“Welcome to the tour, man.”

However much was absorbed is unknown. Daly exited stage right without sharing his thoughts with writers and print media (though he did talk to Golf Channel TV reporters).

It was an exhausting and entertaining PGA Tour Champions debut for Daly. He played four pro-ams and 54 holes of tournament golf, fulfilled who-knows-how-many sponsor obligations, and provided as many fans as he possibly could with an autograph or a photograph.

The Insperity Invitational routinely draws a good crowd, particularly on Saturdays, when it hosts the 3M Greats of Golf – a scramble event featuring nine legends of the game. Daly’s appearance, however, secured more fans throughout the week.

Hundreds followed him on Day 1, maybe a little less on Day 2 (many were watching the Greats), and Day 3 was more subdued, but still impressive by tour standards.

Official attendance records aren’t kept, because tickets aren’t sold. Fans got in free thanks to the funds of corporate sponsors.

It was never a madhouse, but it wasn’t a “freak show,” either. Kenny Perry used the latter term earlier in the year to describe the way, in his opinion, fans and media view the PGA Tour Champions, saying the circuit doesn’t get the attention it deserves.

A steady diet of a competitive Daly can help change that.

A good example: Ten minutes after Daly teed off in the final round, Perry’s group was announced on the first tee. The hundred-plus people who once were there, outside the ropes and under the shaded seating, were now up the fairway. Less than 30 fans remained.

High-profile players are key to the tour’s popularity.

Officials know that, using a system that takes into account PGA Tour wins, major victories and career earnings in determining a player’s status.

Card members know it. No one had a negative thing to say about Daly’s arrival, knowing that his presence increases interest. Increased interest helps the tour, which benefits all involved.

And the guys who used to carry the tour know it.

The biggest concern is, outside of Daly, where are the big draws? Davis Love III won last year on the regular tour and is competing full time, also so he can stay connected to potential members of his U.S. Ryder Cup team. Vijay Singh has played seven career senior events. Fred Couples has only played in two this year. Greg Norman and Nick Faldo don’t play at all.

There are recognizable names and faces who transition to the elder circuit ever year. The potential 2017 crop includes: Jerry Kelly, David Toms, Steve Stricker and Steve Flesch. But will they draw a crowd?

As Hale Irwin, who won more Champions events (45) than anyone, pointed out, the biggest names in today’s game are in their early-20s. “There’s a lot of players in between [22 years old and 50],” Irwin said. “And how many of them are we, collectively, focused on? That’s part of the issue.”

And when a big name does become eligible, like Ernie Els will be in late 2019 or Phil Mickelson in the summer of 2020, is there a desire to play?

Of course, Woods turned the compensatory system on its ear.  Bernhard Langer won $2,340,288 to lead all seniors last season. Jordan Spieth earned $12,030,465, officially, and then some on the regular tour.

And if that desire burns, it might keep them challenging the younger set. “If they can still play, you don’t blame them for doing it,” Dave Stockton said.

The PGA Tour Champions is not the Senior PGA Tour. The newer version has lots of skill, plenty of competitiveness and its share of Hall of Fame players. But it’s missing those older faces.

In an ideal world, you’d get both and maybe Daly can provide that but, “It’s not going to be easy for him,” Trevino said.

“[A player] came up to me a couple, three or four years ago, and he says to me, ‘You know, I didn’t know it was this difficult to win out here. … and it was Mark O’Meara. Mark thought he was going to come out here and just march right through everyone, and it’s difficult.”

Daly wasn’t expecting much this week. He likely would have taken a top-20 finish (he tied for 17th), if offered to him on Thursday. He played almost as many competitive rounds this week as he had all year, missing the cut in the Qatar Masters and the Puerto Rico Open.

Now comes the interesting part. Daly, who hasn’t had full-time status on the PGA Tour since the end of 2006, plans to play a full Champions schedule. He is slated to compete in nine of the next 10 tournaments on the calendar – in addition to starts at the Open Championship and PGA Championship.

If he can avoid injury and fatigue, he should continue to draw support. And if he can find a way to contend, it will be an even bigger boost to the tour.

Wading through the crowd late Sunday afternoon, having bypassed the print press, Daly quickly paced into the sanctuary of the clubhouse.

When Daly threw an iron into Lake Michigan at last year’s PGA Championship, he said it was a sign of how much he cared.

Maybe this was another one of those signs.