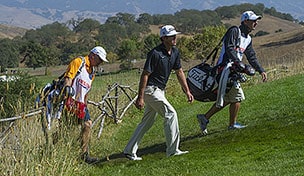 Getty Images
KAPALUA, HI - JANUARY 08: Keegan Bradley hits a tee shot during the final round of the Hyundai Tournament of Champions at the Plantation Course on January 8, 2013 in Kapalua, Hawaii. (Photo by Christian Petersen/Getty Images) *** Local Caption *** Keegan Bradley  -

And that doesn’t include repeat trips, like five total times to Scotland and once to New York, which could be its own country.

He’s back in the U.S. for this week’s Frys.com Open, and he’s in the lead after two rounds. The 23-year-old Floridian shot 7-under 64 Friday, to go along with his 67 Thursday, and sits alone atop the leaderboard at CordeValle Golf Club.

Through two rounds in northern California, Koepka has made 15 birdies, one eagle and six bogeys. He’s one stroke clear of Jason Kokrak (65), and two clear of Robert Garrigus (63) and Jim Herman (66).

“The golf course is in great shape, very good conditions, very scorable,” he said. “To get off to a good start was key and just kind of hang in there and keep playing well.”

For all he’s done and everywhere he’s been, this is Koepka’s first regular PGA Tour event. He competed in this year’s British Open (MC) and PGA Championship (T-70), as well as in the Web.com Tour’s WNB Golf Classic (T-40).

The Koepka chronicles began upon graduation from Florida State University in 2012. In his desire to be a “more rounded player” – and because he had no status anywhere – he crossed the Atlantic to compete on the European Challenge Tour, where he won once in his rookie season and three more times this year.

The current plan is for Koepka to head to China – a new country in 2013! – in two weeks to compete in the European Tour’s BMW Masters and then hope for a couple of U.S. invites the rest of the year. But that could change, depending on this week. If he finishes inside the top 10, he can compete next week in Las Vegas. If he wins … well, that would mean far fewer stamps in his passport, in which he said he had to order an extra 20 pages.

“It would be big. Obviously be nice to win and get status over here,” Koepka said. “But you play good, everything kind of takes care of itself.”

That’s a mature outlook. He credits all the travel for his personal growth. Over the last two years, he’s experienced beauty, culture and horse meat.

“Yeah,' he said, 'last year we had horse meat in Kazakhstan.'

And there was that time in Kenya that scared the crap-ka out of him.

“I think I arrived at like midnight and I was taken on a little journey, about a three-hour road trip. It was scary, I’ll be honest,” he said.

“It was supposed to be about 15, 20 minutes. … We went down some streets and (the driver) wanted to stop and things like that. It was crazy. I was freaking out.”

But, for the most part, Koepka said world travel has been a tremendous experience. Even if he gets his PGA Tour card, he still plans on playing events overseas. Without the Challenge Tour, he’s not sure where he’d be. Though, where hasn’t he been?

“I didn’t have any status coming out (of college). Didn’t play any Palmer Cups or Walker Cups, anything like that. So I went overseas to play. That was my opportunity over there, and I took advantage of it,” said Koepka, who failed to make it through PGA Tour and European Tour Q-School.

“It’s a learning experience playing over there. I think everybody wants to be a worldwide player. At least for me, that’s what I want to be able to do, play the European Tour and the PGA Tour. Just need to get established over here a little bit more.”

As much as he cherishes his global opportunities, he’s very much enjoying this week in the States.

“Playing in America, I think that’s awesome. My family, they haven’t been able to see me,” he said. “It’s nice for them to see, because they have to wake up so early (to follow his play overseas). And then it’s just the comfort of being over here. It’s just a lot more comfortable, knowing where to eat and things like that.”

“Yeah, exactly.  Just the little things. It’s hard to explain. But (a) good bed – you learn to appreciate things like that.”

And not having to eat a horse.