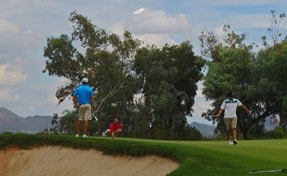 SCOTTSDALE, Ariz. – The range was closed Tuesday at Talking Stick Golf Club, but there were few complaints. Most of the golfers playing in the Golf Channel Amateur Tour National Championship were just glad they were getting to play. The day before, much of the two golf courses there were underwater.

But not only were the courses open Tuesday for the opening round, they were actually in pretty good shape, thanks in large part to the efforts of superintendent Paul Blumke and his crew, who have been working around the clock since nearly 3 inches of rain fell on the course overnight Sunday into Monday morning.

While 3 inches may not be overwhelming in some parts of the country, in the Sonoran desert, it's disastrous. In fact, the rainfall totals, which were as much as 5 inches plus at Phoenix's Sky Harbor Airport, cause widespread flash flooding in the Valley of the Sun and Talking Stick was among the worst hit golf courses. Eleven miles away, where the rest of the flights from the Am Tour Championship were on Tuesday, never closed down, though it did get additional rainfall on Tuesday. Fortunately, Talking Stick remained pretty much rain free on Tuesday, much to the relief of players and maintenance crew alike.

"Considering everything that happened yesterday, the fact that we were even on the golf course today is pretty remarkable," said Jeremy Frenzel of Ft. Worth. Playing in the Championship flight on Tuesday on the harder-hit North Course at Talking Stick, he shot 83 for the first of his four rounds, but didn't blame it on course conditions. "It was fair, playable, obviously there were a couple of times you had to go around some things, but the facility did a fantastic job of getting the course ready."

The crew was only able to mow greens on both courses on Tuesday morning, but if they don't get any more rain, plans were for tees and fairways to be mowed Wednesday morning on the South Course. They will not be able to mow fairways on the North Course, which was more underwater and covered with more debris as cleanup and moving water continues on both courses. Using three 6-inch pumps and six 4-inch pumps, the crew has been removing water from both courses effectively. So much so, in fact, that on most of the fairways, carts were allowed, though there were still places where casual water came into play.

What wasn't open was the driving range, which remained covered with water on Tuesday. As one of the lowest points on the property, all the water drains to the range, which isn't expected to open any time soon.

That wasn't a problem for some of the competitors, though.

"I had heard the range was closed," said Mike Van Scoter, who shot an 85 in the Hogan Flight on Tuesday on the North Course. "I had enough time to go to Grayhawk this morning and hit some balls off of that range. I was able to loosen up out there and make the 20 minute drive back in time."

For the better players, the soft conditions translated into good scores and there were several players under or around par, including Tony Peppler, who shot a 3-over 73 on the South Course.

"There were only a few times my ball had mud on it," said Peppler, who is also from the Dallas-Fort Worth area. "It was pretty nice out there, I thought."

Peppler's only real hiccup had nothing to do with course conditions.