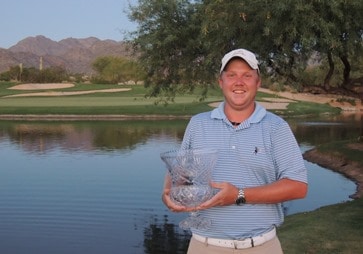 For Chris Hinchcliff, his week at the Golf Channel Am Tour Nationals couldn't have gone much better. He carded a pair of 75s to open the first two rounds of play in the Palmer flight (handicap 4-7.9), knowing that he just wanted to be in the mix when the final round came along. He knew if that was the case, he might have a chance, and he was right.

Firing a final-round 71 on the North Course at Talking Stick Golf Club, Hinchcliff, whose home course is the Federal Club in Glen Allen, Va., overtook third-round leader John Rockwood of Laveen, Ariz., to win his first Golf Channel Am Tour National Championship title. His four-day total, a 12-over-par 297, bested Lockwood by three strokes, but it was nip and tuck for much of the round on Friday.

"I tried to stay conservative in the beginning," said Hinchcliff, a 26-year-old graduate student working on his MBA, "Then when the time came, I knew I would have to play more aggressively."

The turning point came early on the back nine on Friday. He entered the final round a stroke behind Rockwood and after a 1-over-par front nine, remained in that position. But when Rockwood hit an errant drive on the par-4 12th and made double bogey and Hinchcliff made birdie, Hinchcliff took the lead and never looked back. In fact, he would make two more birdies en route to a back nine 35 and one of the best rounds of the tournament.

In the end, Hinchcliff not only reveled in the win, but the whole week of camaraderie, nightly receptions and the whole setup of the tournament.

"This is so unbelievable," said Hinchcliff, who won twice on the Am Tour this year, including the Midwest Classic at Blackwolf Run in Wisconsin. "To come out here and win against 131 other players who are really good players is amazing. It's hard to describe."

Bennie keeps it together to win Sarazen flight

Michael Bennie played college baseball at Arizona State University and even dabbled professionally in the minors, but nothing in his athletic past seemed as nerve-wracking as going into the final round of the Golf Channel Am Tour National Championship with a five-stroke lead.

Fortunately, for Bennie, a general contractor from Surprise, Ariz., he figured out a way to calm his nerves, and win the Sarazen flight (handicaps 12-15.9).

Playing his final round on the South Course at Talking Stick, Bennie held a commanding lead over Jim Sefton of San Jose California after three rounds, but clearly he wasn't comfortable with it.

Although he lives fairly close to Scottsdale, Bennie opted to stay nearby all four nights instead of fighting traffic from the West Valley every morning. With an afternoon tee time on Friday, though, he had a little too much time to kill in the morning. A long breakfast that morning, solving the world's problems with some higher flighted players helped ease his mind. When he arrived at the course, he spent time talking to other players, right up until tee time. And Sefton, he said, kept things light throughout the day.

But still, in the beginning of the round, it was difficult for Bennie, and after nine holes, his lead had shrunk to just three strokes. And despite leading by as much as six shots a few holes later, a double bogey on the 14th by Bennie narrowed the gap again.

"I told myself I had to play the last three holes par or better," Bennie said. "I wound up making par on 16 and 17 and bogeyed the 18th, but by that time, I (still) had a three-shot lead."

As for the week, Bennie said it was an incredible experience. His friend, Sal Hernandez caddied for him to start the tournament, which also made it special.

"Now I'm trying to get him to join the Am Tour," he said. 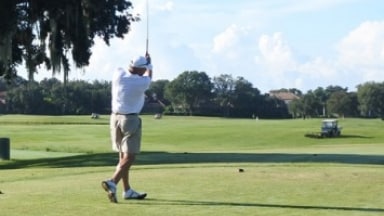