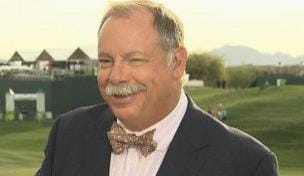 Golf Channel Contributor Alex Miceli is in Pebble Beach, CA for this week’s AT&T Pebble Beach National Pro-Am. He watched Tiger Woods shoot 68 at Spyglass Hill and noticed that Tiger seems to be a lot happier and having a lot more fun on the golf course. The Pro-Am format and playing with Romo both seem to be contributing to those good feelings. He was driving the ball very well but he was not hitting his irons where he wanted to on a number of occasions. He plans to watch Tiger play Monterey Peninsula CC today which should be interesting because it will be the first time that Tiger has played there competitively.

The conditions were absolutely perfect for scoring yesterday and while Charlie Wi shot 61 (-9) at Monterey Peninsula CC, the more impressive scores in his mind were the 63s by Dustin Johnson and Danny Lee as well as the back nine 28 by Ken Duke at Pebble Beach simply because they took place at Pebble Beach.

He had dinner with notable names the other night including George Lopez, Don Cheadle, Nick Faldo, Daniel Chopra, Trevor Immelman, and Anthony Anderson. Lopez is one of the most gracious hosts you could ever meet and loves to make sure that everyone is having a lot of fun. Miceli admitted that he let Lopez pick up the tab but feels that Lopez is the kind of host who would almost be offended if someone tried to pay their way at one of his gatherings.