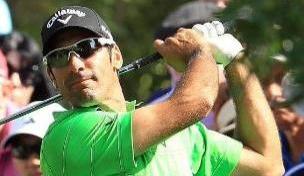 Getty Images
DUBAI, UNITED ARAB EMIRATES - DECEMBER 11: Alvaro Quiros of Spain hits his second shot at the par 4, 1st hole during the final round of the Dubai World Championship on the Earth Course at the Jumeirah Golf Estates on December 11, 2011 in Dubai, United Arab Emirates. (Photo by David Cannon/Getty Images)  -

Quiros is 22nd in the Official World Golf Ranking and he is attempting to complete a Middle East Slam of sorts by winning in Abu Dhabi this week. He has won the other three Middle East events on the European Tour – The Commercialbank Qatar Masters, Omega Dubai Desert Classic, and Dubai World Championship- once each. He feels that he has had so much success in the desert because the conditions are very similar to where he grew up in Spain.

After closing his 2011 so emphatically with a win in the Dubai World Championship, he is very excited to get his 2012 season started with some very special events in Abu Dhabi, Qatar, and Dubai where he has played well and had a lot of success.

He is currently 4th in the European Ryder Cup Points Standings and he really wants to make Jose Maria Olazabal’s team especially because he was so close in 2010. He is in a better position now than he was in 2010 but he still has a long way to go so he has to continue to play well and not let up.

He celebrated his birthday last weekend (he shares the same birthday as Jack Nicklaus) and he said that he hopes to experience what Jack has experienced by winning Majors. It was the first time in about 6 or 7 years that he has been able to celebrate his birthday at home and while he has always been treated well when he has celebrated on the road, it felt great to be at home and celebrate with friends this year.