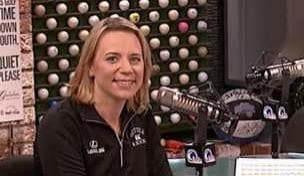 Earlier this week, Annika Sorenstam went to Brazil to make a presentation alongside Jack Nicklaus to the 2016 Summer Olympic committee on their proposal to design the golf course for golf’s return to the Olympics. She had never been to South America before so it was certainly a very exciting trip. It has been great to work closely with Jack Nicklaus and learn just how much he knows about golf course design. The trip was very quick – just under 48 hours – but it was very exciting and she admitted that she was nervous because this is a big deal and she would be honored to be a part of the 2016 Olympics.

The Olympics are 4 years away so Rio has a lot of work to do and while a lot of things are underway, the city still has a number of issues to deal with. Golf is not on people’s minds there because there are not many courses and there are not many players. The Olympics provides a great opportunity to introduce golf to the people of Brazil and hopefully grow the game.

For many people, winning a gold medal is the ultimate dream in their given sport. Neither she nor Jack Nicklaus had a chance to win a gold medal and both would love to be involved in growing the game through the Olympics and South America seems like a great place to grow the game in a variety of ways. As far as their presentation, she was not able to go into many details but it is well-known what their intentions are as far as their design philosophies and their hopes for the future of the game.

Obviously, they as well as anyone who wants to design the Olympic course wants to build a golf course that is exciting and competitive but also they understand how important it is that they build a course that is able to be a center for golf that is open to the public in Rio.

She is being honored with the Bob Jones Award in Texas which is the highest honor that the USGA can give. Annika is very flattered and very humbled to receive this honor and she found out about the honor last year when she was in Sweden visiting her family. She and her husband are leaving for Houston on Saturday morning and they are very excited to be a part of such a big event that honors the highest values of the game of golf. She has a draft version of her acceptance speech and she is still working on it to make sure that she gets it right.

When it comes to the most valuable trophies, she said that hers would certainly be the Major Championship trophies including the U.S. Open. The Bob Jones Award is certainly one of the highest honors of her career and she knows that she would not be receiving it if she did not play as much as she did.

It is a credit to the game of golf that you are seeing someone like 14-year-old amateur Lydia Ko win a professional event. It says a lot about the way the kids today are being taught how to play, how to prepare, and ultimately, how to win. She is very excited about the future of the game of golf.

When asked about Kyle Stanley’s final round collapse last weekend in the Farmers Insurance Open, Annika said that it is always very hard to sit and watch something like this because she knows how big the dream of earning your professional win really is. So many things go through your mind in that circumstance and she doubts that Stanley slept very well on Sunday night. Hopefully he was able to learn some lessons from that day and she hopes that he gets another chance to win soon.

It is very easy to relax a little bit down the stretch when you are leading by a number of shots late in the final round. She has certainly done it and there have been many times where she has had to remind herself that there is still work to do. There were a number of moments where she had a big lead and lost it in the final round. Those moments always hurt but you hope that you always learn something as well. It is very important to get back on the horse quickly because you cannot change the past but you can control how you approach the future. If you allow bad moments to drag you down, you hold yourself back from having future success.

When you think of the Waste Management Phoenix Open, you think about the 16th hole and she thinks that the Coliseum hole is a lot of fun. The LPGA Tour did not have a similar kind of tournament hole but the Solheim Cup would have a similar kind of intensity. She would not necessarily want a hole like #16 every week but every now and then is great for golf.

As Meg Mallon is the U.S. Captain for the 2013 Solheim Cup, the European team is still deciding who they will pick for 2013. Annika said that she has been asked to be the Captain and she has also been asked to reconsider the offer. She has said that she has a lot to do in her life with her family and businesses and her foundation. Also, she understands just how much commitment is required to be the Captain since she was an Assistant Captain to Alison Nicholas in 2011. The decision regarding the Olympic Course Design will play a role in determining her ultimate answer to the offer to be the European Captain.