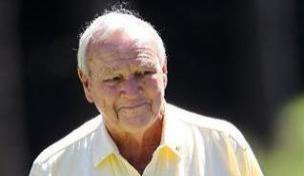 Getty Images
AUGUSTA, GA - APRIL 06: Arnold Palmer walks across a green during the Par 3 Contest prior to the 2011 Masters Tournament at Augusta National Golf Club on April 6, 2011 in Augusta, Georgia. (Photo by Jamie Squire/Getty Images)  -

Golf has started up again for 2012 and he is getting ready for the Arnold Palmer Invitational. Bay Hill Club looks great and everyone is very excited. Another thing that is very exciting is having Ryan Moore as a new player ambassador for his clothing company. He has been working closely with the design of the clothes and he is very happy to see Ryan Moore be the player who will be representing the brand in the field, so to speak. He has been passionate about his look for his entire career and he has taken that passion to his work with his company.

Bob Hope was a wonderful guy and his tournament in the desert was something that he always enjoyed. The people, the courses, the atmosphere, and everything about it was special and a lot of fun. He is sure that some things will change with Humana involved but he is confident that a lot of things about the classic Bob Hope tournament will stay the same.

He was able to get to know a lot of people by playing with amateurs in events like the Bob Hope Classic. He would meet them at the event, get to know them, and in some cases he ended up going into business with them. Among the many people he has played with over the years, Former Speaker of the House Tip O’Neill was someone who surprised him. He did not have a fun-loving reputation in his work but he was very relaxed and a lot of fun on the golf course.

Golf Channel is celebrating its 17th birthday this week and it is absolutely remarkable to see everything that has happened over the years. Things like the deal between Comcast and NBC Sports were never even thought to be possible in the early days and it just makes him very proud to see everything that has happened. The European Tour was one of the inspirations for the creation of Golf Channel and it was and still is one of the foundations of Golf Channel.

He has met a number of Presidents in his life and has probably played with 10 Presidents. He will be seeing President Clinton out in La Quinta tomorrow and they plan to discuss a number of issues related to golf and the Humana Challenge. Dwight Eisenhower certainly played a lot of golf (he was a member of Augusta National) and a number of others including both Bush 41 and Bush 43, Kennedy, Reagan, Clinton, and Nixon. Eisenhower in particular was very competitive and no matter what he shot for 18 holes, he always wanted to get better.

In the year of his last PGA TOUR win in the 1973 Bob Hope Classic, he was at a party with a number of players and he walked past a woman. He brushed past and her blonde wig fell off. Palmer picked up the wig and put it on his head. Jack Nicklaus, who finished runner-up to him that year, blew him a kiss from across the room at the party. Palmer walked over and jokingly asked him to dance which then led to a very famous picture.