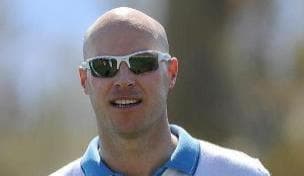 Getty Images
MARANA, AZ - FEBRUARY 24: Ben Crane smiles after defeating Rory McIlroy of Northern Ireland (not pictured) on the 11th hole during the second round of the Accenture Match Play Championship at the Ritz-Carlton Golf Club on February 24, 2011 in Marana, Arizona. (Photo by Stuart Franklin/Getty Images)  -

2010 Farmers Insurance Open Champion Ben Crane is not only playing at Torrey Pines this week but he is also making Morning Drive the place for the premiere of his latest video “The Lost Love.” When it comes to making these videos, he has no idea how some of these videos came to be as he and his friends have simply relaxed and let the ideas flow. In reference to his latest video, he said that he was a gymnast and felt that it was not fair to keep this talent of his away from the public.

The difference between someone who wins on the PGA TOUR and someone who doesn’t is not very much. There are so many great players on both the PGA TOUR and the Nationwide Tour and the talent just keeps increasing. Anyone can win on any given week and that is very exciting for golf. As for his game, he feels that he is playing well and he is looking forward to returning to a place where he has won in the past.

After calling the anchored putter a virus, he switched to it himself at the end of 2011 but has gone back. Using a long putter takes a tough element of the putting stroke out which can make it easier but on the other hand you have to make sure you are aligned exactly right or else you are going to struggle. He respects those players who are able to putt well with the anchored putter and if he could choose a putter for a young kid to start learning the game, he would choose the long putter because there are elements which are much easier.

If he had a choice, he would not outlaw the anchored putter because it has been out for too long and too many players have come too far in the evolution of their games with this kind of putter. It is allowed by the Rules of Golf and therefore it is fair and unless something changes in regard to this issue, he does not think they should be banned nor does he think it should be banned.

Both he and his wife are dedicated to a number of charitable initiatives and he is involved in something called Day with the Pros at the Madison Club in La Quinta, CA. He has been able to get a number of his fellow PGA TOUR pros involved and they are getting together to raise money to help get young children out of trafficking. They are very passionate about the issue and his wife was even able to talk to President Clinton about this issue at the Humana Challenge last week.