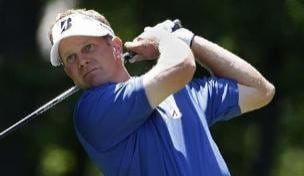 Getty Images
ATHENS, GA - MAY 05: Billy Hurley III hits a drive during the first round of the Stadion Classic at UGA held at the University of Georgia Golf Course on May 5, 2011 in Athens, Georgia. (Photo by Michael Cohen/Getty Images)  -

2004 U.S. Naval Academy Graduate and former Lieutenant in the U.S. Navy Billy Hurley III earned his PGA TOUR card for 2012 by finishing 25th on the 2011 Nationwide Tour Money List. One of the things he is focusing on the most is his schedule for the 2012 PGA TOUR season. He had started 2011 on the Nationwide Tour with low status but was able to take advantage of a few exemptions to move up in priority before finishing runner-up in an event in Ohio in July. At that point he was hoping to make it to the final stage of Q-School before eventually earning his card at the Nationwide Tour Championship. Hurley learned that he had his card on the last day of the last event. He spent much of that day seeing what the various scenarios were before in the end getting his card after waiting 90 minutes following his last hole of the tournament. Golf-wise, it was the most stressed he had ever felt because the fate of his 2012 season was literally in the hands of other players.

When it comes to nerves in his life, the most nervous he had ever felt in golf was coming down the stretch in the final round of the 2011 Nationwide Tour Championship because he had to make a few clutch putts to keep the hopes of earning a PGA TOUR card alive. His experience in the Navy and having served in the Middle East gives him life experience and perspective which allows him to properly recognize the value of a putt during a tournament round and know that in the grand scheme of things, it is not really all that important.

He will begin his PGA TOUR career as a member next week in the Sony Open in Hawaii and he was a ship driver in the U.S. Navy in Hawaii as an officer. Being a ship driver teaches you how to react quickly to what is in front of you and he was able to win two awards for his ship driving ability. When he was on the USS Chung-Hoon in Hawaii, he was deployed twice to the Middle East where in his first deployment he helped guard oil units in Iraq as well as do some humanitarian work in the Philippines. In the second deployment, he went to Japan and also drove the ship through the Suez Canal which gave him a lot of confidence in his ability to be a leader. He will be seeing some of the officers that he served with on the USS Chung-Hoon next week when he is Hawaii for the Sony Open and is very excited to see the ship and all of the officers.

Following his year on the Nationwide Tour, he feels that he plays in a similar manner this year on the PGA TOUR he will have a successful rookie season. The trick is that he has to figure how to get his game to a point where he can consistently and confidently play his own game and know that his game and his body will hold up under pressure.

He is most excited to play Harbour Town on the PGA TOUR this year. He knows that he will need an exemption to play in the RBC Heritage this year but he feels that the course sets up well for his game as it is shorter course that requires a lot of accuracy off the tee and from the fairway.

Out of the players in the field at Kapalua, he feels that his game is most similar to David Toms as Toms is a veteran who is not a long hitter but can hit it straight on a consistent basis and obviously Toms has been able to go on to win multiple times on the PGA TOUR and have a great deal of success. He hopes to be able to spend time with a  number of veteran players including Ben Crane and Jonathan Byrd.

He was the first Lieutenant on the USS Chung-Hoon and agreed with Erik and Gary that the nickname of “The First Lieutenant” could work very well.

Starting low on the priority list, he is under a lot of pressure early on this year to play well in order to improve his status in the reshuffle in two months. Since he is starting at the bottom, he figures that there is no way to go but up. It is interesting that he is a card-carrying member of the PGA TOUR but he does not have his choice of events right now although he wants to play well enough early on to change all of that.

Out of the other rookies on the PGA TOUR in 2012, he looks at players like Scott Brown and Jason Kokrak as those who can get off to great starts and turn in strong rookie seasons. Kokrak is a great player and thinks that he can hit it as long as anyone on the entire PGA TOUR, including players like Bubba Watson and Gary Woodland.

Last year, Hurley played in the Arnold Palmer Invitational Pro-Am with Gary Williams and his first piece of advice for Gary when it comes to playing competitive was to be at the first tee on time. Hurley enjoyed playing at Bay Hill last year and getting to meet Mr. Palmer and has hopes of playing there again someday.