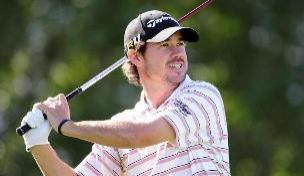 Last week, he finished T20 in the AT&T Pebble Beach National Pro-Am but his pro-am partner, Gregg Ontiveros, was on fire and was hitting on all cylinders with his game. As a result, they tied for the Pro-Am title.

The entire rookie experience has been incredibly exciting and everything about it has been fantastic. In fact, he does not have enough time to tell people about everything that has been great about this experience.

Last week, he was watching Tiger Woods and Phil Mickelson hit golf balls and that was when it hit him that he was a PGA TOUR member. His lifelong dream had been to play in a golf tournament against them and now it has come true.

The only thing that he does not like about the proposed changes to PGA TOUR qualification is that it eliminates his own story. He went from having no status to PGA TOUR membership because he made it through all three stages of Q-School and the changes to the system would make that kind of story impossible.

Living in Sea Island, GA, he said that the worst part was losing money to all of the other PGA TOUR players who live there. In fact, earlier this week he had a $50 lesson from fellow resident Lucas Glover but in all seriousness, he loves living in Sea Island and loves being able to be around a lot of great players who also are nice people.

When it comes to the status reshuffle, he is interested in where he stands but he does not spend too much time dwelling about it because that would be a waste of  time. He knows that if he plays well, his status will improve in the reshuffle.

In his first four starts on the PGA TOUR, he is very happy that his putting stats improved last week and as a result he had his best finish of the season so far. Harman knows that in order to be successful on the PGA TOUR, you have to be a top tier putter and last week he got closer to that level.