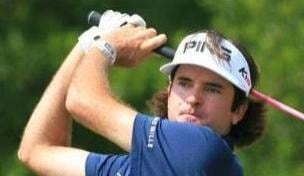 Getty Images
NEW ORLEANS, LA - MAY 1: Bubba Watson hits his tee shot on the 11th hole during the final round of the Zurich Classic at the TPC Louisiana on May 1, 2011 in New Orleans, Louisiana. (Photo by Hunter Martin/Getty Images)  -

Bubba Watson won the 2011 Farmers Insurance Open for the first of his two wins on the 2011 PGA TOUR and he returns to Torrey Pines this week to defend his title. He has wanted to start a Foundation but he realized that that would not be the best way to raise the maximum amount of money for worthy causes so he has called on his friends to try to raise $1 million dollars this year. PING is helping out by making a pink version of his driver and for every drive hit over 300 yards, they will donate $300 to a cancer-related charity. The campaign is called “Bubba & Friends: Drive to a Million” and fans can keep track of the money raised at BubbaWatsonGolf.com.

Looking back on 2011, the best moment of his year was being on the winning Presidents Cup team in Australia because he does not know if he will ever get to do that again and while his wins in San Diego and New Orleans were great, nothing compares to winning a team event for your country.

When it comes to appearance fees, he considers very large purses to be appearance fees enough plus he does not have to travel halfway around the world to play for big money when he gets to compete for millions closer to home. The large purses have contributed to his ability to buy the original General Lee car from The Dukes of Hazzard. He watched the show while growing up and he has said for years that he wanted to own the General Lee. He does not plan to sell it but will instead renovate it, drive it around, and take it to charity events. Right now, it has only the basic parts because the car that he bought was the one that jumped up in the air. He has driven it to the gas station and to In-N-Out Burger but next week he will drive it to the Phoenix Open and it will be there in Scottsdale. When he went to get a burger in Scottsdale, he had about 40 people take pictures with it and a lot of other people sat it in.

Over the last year, he felt that he has grown a great deal off the course. His week in France he felt was the best week of the year because of all of the places he got to see and the new things that he got to experience. He also learned what he can do to best help others and win or lose, he feels that right now he is doing what he needs to be doing for his friends and family. While golf is his first love and he wants to get better, he admits that his biggest challenge is practicing and acknowledged that golf will come ahead of his charity work because without good golf, he will not be able to help as many people as he feels he can help.