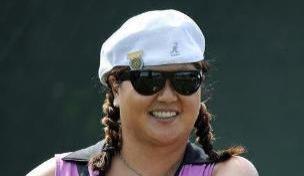 Getty Images
during the practice round for the 2011 U.S. Women's Open at The Broadmoor on July 6, 2011 in Colorado Springs, Colorado.  -

Christina Kim is a two-time LPGA Tour winner who won on the Ladies European Tour in 2011 and was also a member of the U.S. Solheim Cup team. The 2012 LPGA Tour Schedule has been released with more events and more money than in 2011. Over the last couple of years the LPGA Tour has progressed a great deal and a lot of that is thanks to Commissioner Michael Whan. However, as much as the LPGA Tour is growing, players and the LPGA Tour alike must not forget sponsors like Wegmans who have been with the LPGA Tour for many years.

Her agent is Chubby Chandler at ISM and Chandler said on Morning Drive earlier this week that the deal was made on Twitter. Kim said that she and her previous agency split when the company changed philosophy. A friend recommended that she talk to Chubby Chandler to seek advice and he advised her to join ISM. It is a priority to be friends as well as agent-client so no matter what happens, she and Chubby Chandler will be friends.

Jason Gore spoke with Christina about how much he wanted to play in the Northern Trust Open and how he felt that it was his fifth Major. She helped drive the Twitter campaign which was ultimately successful.

For 2012, she is hoping for at least one win and some great times. Also, for the relaunch of the new LPGA Tour website in March, she will be posting a lot of pictures from various points in her life and she will be doing her part to show how the players on the LPGA Tour are different out there.