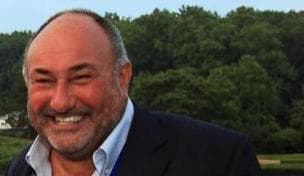 Chandler is the Managing Director of International Sports Management whose clients in golf include Lee Westwood, Darren Clarke, Charl Schwartzel, Louis Oosthuizen, and Peter Uihlein. He travels all over the world but is beginning to like everything about the United States. As a former professional golfer, he has also been fortunate enough to play at some great golf courses like Pine Valley and Seminole while he has been in the States.

Looking back on 2011, the first thing that comes to mind is the Open Championship because it was the culmination of so many things with Darren Clarke. He has represented Clarke for over 20 years and to be able to be a part of a moment like that was very special. Almost nothing can compare to watching Darren finally win his first Major at the age of 42.

Following the PGA Grand Slam of Golf, he and Rory McIlroy flew together in a private plane and during a stop in New York, they discussed a lot of issues and Rory said that he felt that it would be best to go their separate ways and McIlroy went on to join Horizon Sports Management. ISM still has an incredible group of players but McIlroy may have felt that he needed to leave and “freshen things up” because ISM had become too big and McIlroy needed more attention and specialized focus.

Rory McIlroy is no doubt going to be a great player because of his talent and thinks that he will win between 5 and 15 Majors. McIlroy rejoined the PGA TOUR for 2012 around the time that Chubby thought he would. Rory had tried the PGA TOUR in 2010 and it was not to his liking atthat time so he decided to take a break from the PGA TOUR. All rumors about tension between Rory and Lee Westwood are false as they are both friends and have gotten along great for a very long time.

His mother began calling him “Chubby” when he was younger and when he is on the road, he actually has two credentials with one that says Chubby and another that says his actual first name of Andrew. When it comes to the music he listens to, he likes Earth, Wind, & Fire as well as some of the younger acts today like Rihanna.

Darren Clarke has two young kids and is engaged to be married so he is not a member of the PGA TOUR. Thanks to the Open Championship win, he is exempt virtually everywhere through 2016 and after that, he is just two years away from turning 50 and joining the Champions Tour. He has a lot of options and he thinks that this year will be one where he travels all over the world as the Open Champion. For the future, he does not rule out Darren becoming a member of the PGA TOUR.

If he could make unilateral changes on the PGA TOUR, he would want fewer golf tournaments and quicker play. Slow play hurts the game of golf in virtually every way and the large of number of tournaments can actually hurt the overall product of the PGA TOUR because it dilutes the quality of the events to the point where you have a few strong, elite events among a bunch of lower and middle tier events that struggle to attract strong fields. You want to have a lot of opportunities for players but by and large, you are also seeing a lot of change among title sponsors because of the business of the game of golf which can potentially hurt the game.

Peter Uihlein turned pro last month and signed with ISM to represent him in his career. Last night, Chubby actually stayed with the Uihlein family. He has known the family for a long time ever since Titleist signed Darren Clarke to a contract. In discussions with the Uihlein family, Chubby suggested that Peter should start his professional career overseas instead of the United States because there will be less pressure overseas than there would be in the U.S. He is very concerned about talented young college players having careers that plateau and he does not want to see the same thing happen to Peter Uihlein.

He has a young client named Matt Baldwin who spent a lot of time on the mini tours overseas and was someone who Chubby at times doubted would make the big leap to success on the European Tour. But Baldwin earned his card and recorded a top 10 finish in his first European Tour start. Baldwin is an example of a player with whom he has built a close relationship. That is a goal he has with a lot of his players and as a result, he has become so close to his players and their families that he attends their weddings and other family events.

Charl Schwartzel is another example of a player who he has been very close to for many years. What many people may not know about Charl is that he loves to cook and when he hosts the Champions Dinner at The Masters this April, he not only wants to have a South African barbecue served up, he wants to actually cook the barbecue himself.

He supports the idea of appearance fees for tournaments because he supports the idea of doing whatever you can to promote a golf tournament in order to attract crowds and ultimately raise money for charities. Appearance fees are paid for players to come to events all over the world and it happens in the United States as well although it happens in a less direct manner where a sponsor will make a player an ambassador of that company and the player appears at the tournament as part of the arrangement. Going to dinners and corporate outings are other ways to give out appearance fees to players and that also goes on all over the world.

He attended the Presidents Cup this year and in every sense it is completely different from the Ryder Cup. The Ryder Cup is an event that he does not think will ever lose prestige because from the atmosphere in the team room to the attitudes of the fans the Ryder Cup is a feeling that is totally unique in the world of golf.