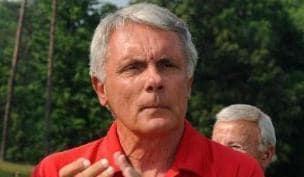 Coach Gary Williams is the former Men’s Basketball Coach from the University of Maryland and he called into Morning Drive as a surprise mystery guest for our own Gary Williams. Jimmy Roberts was very excited to be able to surprise Gary Williams with THE Gary Williams. The Coach recently had the Maryland basketball court named for him in College Park, MD.

Now that he is retired from coaching, he has had a lot more time to hit balls and play golf especially this year with the mild winter. There are a number of good golfers among basketball coaches including Roy Williams and a number of young coaches but with the exception of charity events, a lot of coaches do not make it public knowledge that they are good players because it would look as though they do not spend enough time working with the team.

Stepping away from a game that he loves so much has been tough at times especially when it comes to the preparation for games against tough opponents as well as the time in the locker room with his players. He pays very close attention to how Maryland is doing and enjoys being a fan of the Terrapins.